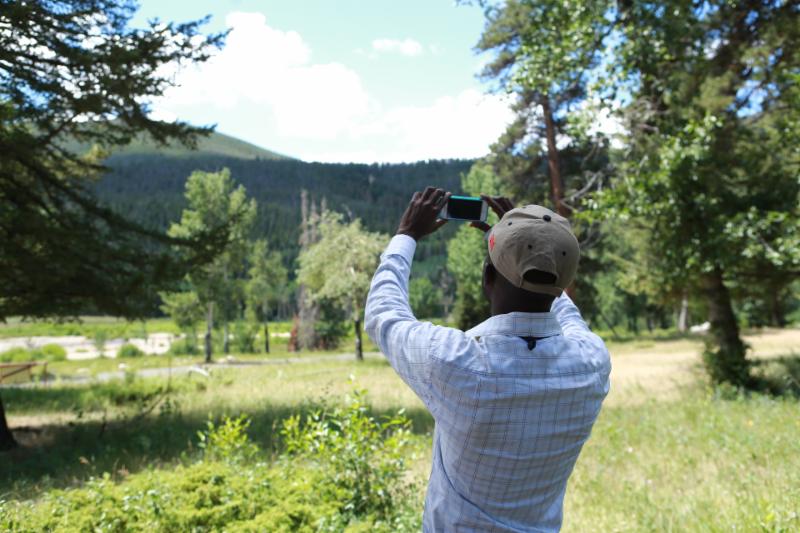 Would you like to help scientists study the Earth and the ways in which our planet is changing? There’s an app for that.

Researchers can accomplish amazing things these days with satellites — they can study clouds and climate, forests and land use change and even bird migrations. But with so much satellite data, it can be hard to match up measurements from the sky above with information about what’s actually on the ground. That’s where citizen scientists like you come in.

“NASA studies Earth from space, looking down,” says Holli Kohl, the coordinator of NASA GLOBE Observer, a citizen science program that pairs volunteers’ on-the-ground observations with satellite imagery from the space agency. “Take clouds, for example: You on the ground have a different perspective, you’re looking up.”

NASA launched GLOBE, the Global Learning and Observations to Benefit the Environment program, in 1994. Originally a tool for students in classrooms, it hit the big time in 2016 when they launched the GLOBE Observer app and expanded the program to teens and adults around the world.

The app is simple to use, and currently has four different projects that are looking for your observations of clouds, trees, mosquito habitat and land cover near you. Each project has the same basic observation method of taking a few photos and answering a few questions about what you see. With the app, citizen scientists around the world can submit observations that will help NASA scientists studying climate change, the spread of mosquito-borne diseases and more.

GET READY FOR EARTH DAY

“We could send scientists to a few locations on the planet to take some of those ground-based concurrent measurements, but only a few. But citizen scientists are everywhere,” Kohl says.

Participants like Yashraj Patil in India regularly use GLOBE Observer to learn about the world around them. “I enjoy studying the diverse ecosystems of nature,” he says. “I utilize GLOBE protocols to understand weather variations, cloud changes and biosphere changes wherever I travel. I gather data and send it to NASA GLOBE Observer if I come across any unexpected observations.” Patil even brought GLOBE Observer with him on an expedition in the Himalayas earlier this year, where he submitted NASA GLOBE’s highest-altitude-ever observations: 17,800 feet (5,430 meters) above sea level at Taglang La.

But you don’t need to travel the world to submit helpful data. Observations from your own backyard can be just as important. You can find simple instructions for taking photos and submitting your observations for each project on the GLOBE Observer app. After a quick in-app training, you’re ready to get started.

NASA GLOBE is also the newest SciStarter affiliate! That means you can earn credit for participating on your SciStarter dashboard. There are currently five different ways to join in — check them out!

When scientists study clouds, they’re typically looking at them from above, from satellites. Satellites are useful for studying the Earth from above, but that doesn’t give us the full picture. Clouds can be layered, and those on top might obstruct their view of what’s below. With the NASA GLOBE Observer app, you can submit observations of clouds any time, or during a satellite overpass for extra-helpful data. You’ll have the option to learn to identify different types, like cirrus and cumulonimbus clouds, too.

Sick of itchy bug bites? Scientists are too — especially when mosquitoes carrying diseases like Zika virus and dengue fever spread northward as the climate warms. With the GLOBE Observer mosquito habitat mapper, you’ll learn to find mosquito habitat near you and submit your photo observations. Then do yourself and your neighbors a favor: Dump out the water to eliminate the habitat.

You’ll also have the option to go the extra mile and sample, count and identify the mosquito species. This requires a few extra tools: a cup, mosquito dipper, bulb syringe and camera macro lens. But even a basic observation — no tools required! — helps scientists understand how and where mosquitoes are spreading.

With GLOBE Observer’s tree project, you’re not just taking photos — you’ll turn your phone into a clinometer, a device that measures tree height! Scientists studying forests can get a lot of information from satellite images, but they only provide a two-dimensional picture of the soaring organisms. Providing tree height measurements from around the world will let them better study things like forest health and how much carbon is being stored in trees.

Study the Earth and Land Cover

Land cover refers to what’s on top of an area of land, like cities and pavement, croplands, trees or even bare soil. Researchers use this kind of information to track the effects of land use changes over time, like those that happen due to climate change, deforestation or development. These changes in turn affect how much carbon is released into or absorbed from the atmosphere, how water flows across a landscape or how natural disasters will affect people.

Scientists already have large-scale land cover maps thanks to satellite imagery, but this information is at a fairly low resolution — like an overly grainy photo. They need more information, and they want you to submit photographs of the landscape around you so they can add details to their maps.

The goal for a lot of these projects is to eventually switch over to AI to identify what’s in the photos people submit. But to do that, researchers need to already have a lot of photos that have already had their contents identified. “We also have some new research, funded by NASA, to develop machine learning algorithms to classify land cover in photographs. It sounds really boring, but it turns out to be a really fundamental essential measurement for a lot of climate related questions, like carbon absorption, carbon storage, things like that,” Kohl says.

If you’re looking for a way to contribute from the comfort of your home, there’s a NASA GLOBE project for you, too! With CLOUD GAZE on Zooniverse, you can help identify the amount and types of clouds in the photos volunteers upload to GLOBE Observer.

“We welcome anybody and everybody to join,” says Marilé Colón Robles, project scientist for NASA GLOBE Clouds. “There’s a chat [on Zooniverse] going on with people all around the world because GLOBE is international. People can chat with other cloud lovers or climate lovers from all over the world.”

“This ground-up view and tagging these photographs of the sky give us an insight that we’ve never had before of what the satellite might be seeing from the space looking down,” Colón Robles says. “It’s two different perspectives merged together to make one complete story.”

“We cannot do this without you.”

Anna Funk is a journalist, writer and editor. Learn more about her work: https://bio.link/itsdrfunk