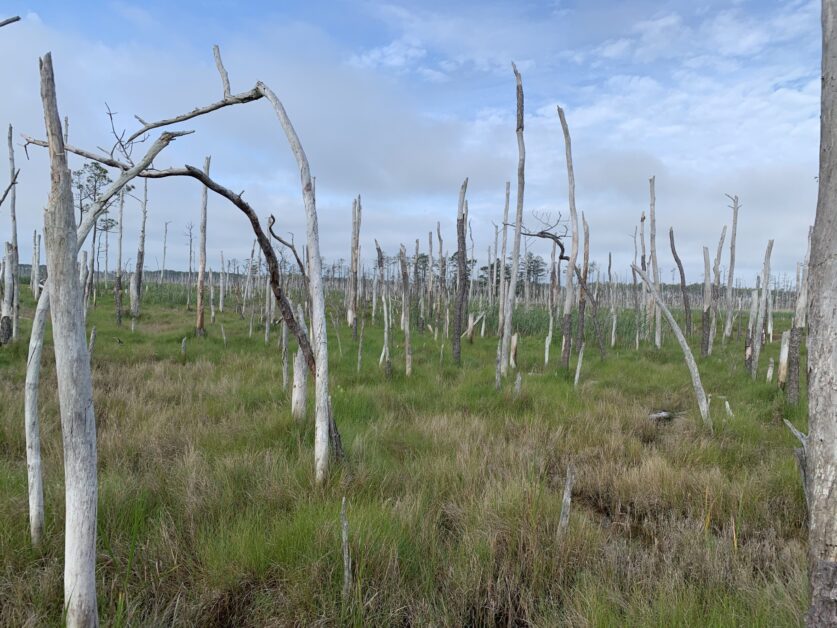 Document the formation of ghost forests — stands of dead trees that were recently killed by salt stress — with citizen science.

Have you seen a ghost forest? As sea levels rise around the world, coastlines are increasingly marked by lingering stands of dead trees.

The cause of death isn’t a mystery. Sea level rise is intensifying the effects of flooding and pushing saltwater into low lying coastal ecosystems. That saltwater kills the trees, leaving behind eerie stands of sun bleached tree trunks accompanied by migrating marsh grasses, transforming coastal forests into marshlands.

To scientists, these ghost forests are a striking visual indicator of sea level rise. Few regions have seen ghost forests form more rapidly than what we’re currently witnessing in the sea level rise hotspot that runs from North Carolina to Massachusetts.

That’s why researchers are asking citizen scientists — volunteers who help researchers collect and analyze data — to get involved documenting the formation of ghost forests at a larger scale. Through a project called Ghosts of the Coast, volunteers upload photos and record observations on a public map of ghost forests. The data is offering insights about things like the type of forest being lost, the number of dead trees present and which species are taking their place.

Take Part: Contribute to the Ghosts of the Coast Project on SciStarter Today!

Even before our eyes can identify the emergence of a ghost forest by the iconic stands of dead trees, there are subtle changes that occur. First, tree growth and sap flow are reduced as saltwater starts to seep into fresh groundwater. Young trees begin to die and new trees stop appearing all together.

With the absence of young tree growth, lower elevation areas of the forest become dominated by older trees. With more sunlight available and seeds blowing in from storms, salt tolerant species begin to establish themselves in the forest understory. Finally, even the older trees die, leaving behind stumps in newly-formed tidal marshes — the only remains from a once-thriving coastal forest.

Sea Level Rise at Our Doorsteps

As dead forests spread, scientists from the Gedan Coastal Marine Ecology Lab at The George Washington University and the Virginia Coast Reserve LTER are engaging citizen scientists to help document their formation on a larger scale. Volunteers collect data through a simple survey that populates a public map as part of a larger ghost forest website.

Ghost forests can form in any forest type. Because of their wide geographic distribution, it is important to grow our understanding of where ghost forests are forming.

Beyond data that can inform forest research, the project also aims to spread awareness, curiosity and understanding about the pace of coastal change.

Related: Lemurs: Where Will They Go?

“Ghost forests are one visually dramatic example of the many climate change impacts we are seeing in the here and now,” says Ezra Kottler, a PhD candidate in the Gedan Lab. “It’s important for people to see with their own eyes that climate change isn’t some far away hypothetical: it’s at our doorsteps.”

Contribute your own ghost forest observations through the Ghosts of the Coast survey, accessible via phone, tablet and computer.

Visit Ghosts of the Coast to learn more about ghost forests, and to view your observation on a public collaborative map.

More information is also available on the Ghosts of the Coast SciStarter Profile.

Sarah is a recent graduate of The George Washington University. She currently works as a research assistant in the Gedan Lab at GW studying the impacts of sea level rise on tidal wetlands of the Chesapeake Bay. Sarah enjoys long walks in the marsh and exploring the intersections of ecology, education and art.