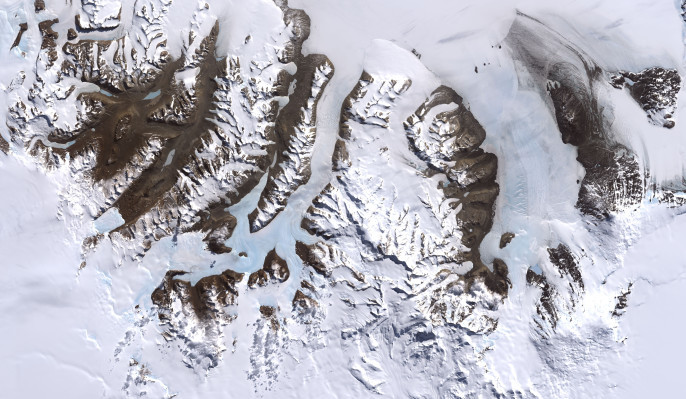 At a remote Antarctic outpost, cameras have been installed to capture time-lapse images of geological features in the McMurdo Dry Valleys.

The images are giving scientists from Brown University and elsewhere a view of geological change in the Dry Valleys of the Antarctic that can’t be seen any other way. Time-lapse photography is combined with weather data is revealing new details about the changing climate on Earth, but also offering insight into what conditions might be like in the similar frozen deserts of Mars.

The Dry Valleys stretch for about 50 miles through the Transantarctic Mountains. Because the region is so cold and so dry, the landscape is remarkably stable, but that doesn’t mean the region is entirely unchanging. Time-lapse offers a way to capture subtle changes.

Brown University research analyst Jay Dickson has been working on this project for seven years. Dickson and his colleagues have already used this system to investigate an ice cliff in Garwood Valley, a part of the same Antarctic coastal region. The ice was left behind 20,000 to 30,000 years ago when a glacier invaded the valley and later retreated. Using a variety of remote sensing techniques, the researchers were able to show that the cliff’s rate of melting over the last decade was 10 times faster than the melt rate over the last 10,000 years.

Time-lapse photography also revealed the mechanism behind the increased melt rate. By combining two months of images taken at five-minute intervals with data on solar intensity captured by a nearby weather station, the researchers showed that the primary driver of the melting process is solar radiation.

“We could see that for about four to six weeks every year, just in the middle of the day, that thing melts like crazy,” Dickson explains. “People thought maybe the cliff was retreating because of calving events, where the river that runs in front of it melts the bottom and causes chunks to break off. But we didn’t see that in the time lapse. What we saw was this very clear melting due to solar radiation.”

The ability to link the camera images to weather data is a key part of the system. Dickson wrote software that enables camera images to be automatically synchronized with data from nearby weather stations. “That’s a big part of this,” he says. “We have a ton of measurements of what the climate is doing in terms of temperature, humidity, sunlight, and everything else, but we’re really far behind in terms of the surface response to those climate forcings. Our approach is able to link those forcings with what’s happening on the surface.”

Understanding Earth’s climate isn’t the only reason the researchers are interested in the Dry Valleys. The frigid, desiccated landscape is the closest analog on Earth to the surface of Mars. In another paper published last year, Dickson and his colleagues have used time-lapse to reveal a hydrological process in the Dry Valleys that’s similar to a process believed to be happening on Mars.

Scientists studying Martian landscapes have noticed peculiar dark patches that appear on cliff faces on a seasonal basis. Some scientists think these marks could be caused by a flowing saltwater brine. Similar features have been found in Antarctica, and the time-lapse system has shed light on how they form. The data shows that dark tracks form in certain spots on the valley floor when the humidity of the surrounding air increases. Researchers concluded that the dry, salty soil soaks up any available moisture in the air and when the humidity spikes, these dark “water tracks” form.  “It’s possible that you have a similar hydrology happening on Mars,” Dickson says.

How cameras and batteries survive Antarctica

Before heading to Antarctica, Dickson tested the cameras by placing them in his freezer for five weeks. But, of course, conditions in the field presented a far greater challenge and Dickson’s time-lapse work involves much more than simply placing a camera on a tripod for two months. Keeping the stations running in one of the harshest environments in the world isn’t easy.

The cameras are housed in fiberglass enclosures about the size of a small microwave and are powered by two 12-volt car batteries. While extreme cold is generally a problem for batteries, the fact that the sun never sets during an Antarctic summer enabled Dickson to use small solar panels to keep the batteries charged.

But the extreme temperature isn’t the only problem. There are other elements that Dickson can’t recreate in his freezer. Chief among them is the wind, which often blows through the Dry Valleys with hurricane force, and Dickson learned the hard way what these winds can do to his equipment. “The first station I installed was completely ripped apart by the wind,” he says. “One of the car batteries, we never found. So the wind can pick up a 70-pound battery with no problem.”

The newest installations are held together with heavy cargo straps and bolted to large rock boxes to keep them in place. The wind also blasts the fiberglass enclosure with dust, gradually turning the clear material opaque, so Dickson has to replace the window through which the pictures are taken at the end of each field season.

Another challenge is installing these stations in extremely remote locations. The team of researchers Dickson works with is transported to the Dry Valleys by helicopter, but specific installation sites must be reached on foot. “The pilots don’t necessarily like landing in the most geologically interesting sites,” he said. “So sometimes we have to hike long distances.”

Those treks must be made with the heavy car batteries in backpacks. Then there’s the matter of getting back to those locations in February to retrieve the data at the end of the season.

“The sites span a lot of the range of climates that occur in the Dry Valleys,” he said. “My goal is eventually to cover as much of the Dry Valleys as possible and build a multi-year record of activity.”

Dickson, along with Brown University geologist James Head and Joseph Levy of the University of Texas, describe their time-lapse technique and how it contributes to Antarctic science in Eos, Transactions of the American Geophysical Union.

What Happens When Antarctica Melts? – Between December 2001 and February 2002, the Antarctic continent underwent a season of intense melting. Aside from the loss of ice, what really happens when Antarctica melts?

Why Citizen Scientists Study Phytoplankton in Antarctica – Scientists at Scripps Institution of Oceanography are working with Antarctic tour operators like Hurtigurten to enable vacationers to serve as citizen scientists with the FjordPhyto citizen science project.

Climate Change Strikes Totten Glacier in Antarctica – Totten Glacier is losing ice, and the warm ocean water causing this has the potential to also push the glacier back to an unstable place.

Narwhal tusks expose climate change – Like rings in a tree trunk, narwal tusks have growth rings that give us a window into changing conditions in the Arctic climate.

Most People Aren’t Climate Scientists. We Should Talk About Climate Change Anyway – Most Americans don’t talk about climate change. But many experts think that getting communities involved in climate science is the best path forward.

Climate Change: Hot and Dry for Some – Climate change is here and it’s not good. The very near future promises to be hotter and dryer in some places. Find out what the numbers really mean.

CO2 underground could combat climate change – Despite the scariness of already-manifesting climate change, lawmakers and researchers worldwide have identified strategies to help us fight it.

Featured image: Satellite image of the McMurdo Dry Valleys courtesy of NASA. Image by Robert Simmon, based on data provided by the NASA GSFC Oceans and Ice Branch and the Landsat 7 Science Team