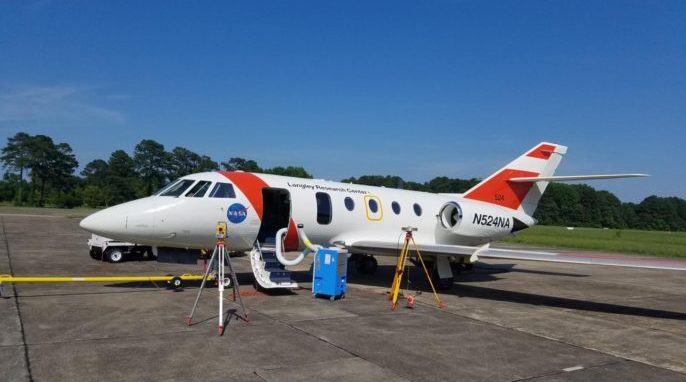 In July of 2016, a team of NASA scientists succeeded in collecting data about summer melting ice in the Arctic during a first-of-its-kind operation. The team surveyed the Arctic Ocean off the Alaskan coast, in Barrow, to measure the aquamarine pools of meltwater on ice floes—huge chunks of floating ice—that may be accelerating the overall sea ice retreat.

They chose the northernmost US city because of its proximity to the ocean. However, they knew they would face unstable weather conditions there, so they would have to pursue targets of opportunity. The day before each flight they studied weather imagery and models and tried to plan a flight line that “basically gets into any hole in the clouds there is, rather than following a specific path,” explained Nathan Kurtz, IceBridge’s project scientist and a sea ice researcher at NASA’s Goddard Space Flight Center in Greenbelt, Maryland.

After a record-warm winter in the Arctic, and with sea ice across the Arctic Ocean shrinking to below-average levels, the researchers decided to launch Operation IceBridge to map the extent, frequency, and depth of melt ponds, the pools of meltwater that form on sea ice during spring and summer. In fact, recent studies have found that the formation of melt ponds early in the warm season is a good predictor of the sea ice yearly minimum extent in September. If there are more ponds on the ice earlier in the melt season, they reduce the ability of sea ice to reflect solar radiation, which leads to more melt.

The operation is the first of its kind; there has never been such an extensive study of this phenomenon. “Although there have been previous airborne campaigns in the Arctic, no one has ever mapped the large-scale depth of melt ponds on sea ice using remote sensing data,” said Kurtz. “The information we’ll collect is going to show how much water is retained in melt ponds and what kind of topography is needed on the sea ice to constrain them, which will help improve melt pond models.”

On the first flight, the team took off in the fog and had to fly for a couple of hundred miles before the clouds cleared up. Moreover, their airplane, an HU-25C Guardian Falcon, had a smaller fuel capacity compared to the P-3 aircraft that NASA has used in the Arctic so far. This time, they had to fly for a shorter time than the usual Arctic flights. So they planned several four-hour flights, at an altitude of 1,500 feet (450 meters), each one covering 1,000 nautical miles (1,150 miles) and focusing on the Beaufort and Chukchi seas north of Russia, Alaska, and Canada.

On the plane the researchers carried three instruments: a laser altimeter that measures the heights of the water, snow, and melting Arctic ice; an infrared imaging system that provides temperature readings to help differentiate between water and ice; and a downward-facing mapping camera. They studied how well the laser altimeter measures the depth of melt ponds, which is another possible indication of the year’s overall melt season. Kurtz and his colleagues investigated whether a combination of measurements can help estimate sea ice thickness—a tricky piece of information to get, but one that could provide clues to how fast the summer ice will melt, or whether it could stick around for another year.

The Different Face of Summer

When you think about polar ice, you might picture a never-ending, white, flat surface. This is not its condition in the summer, though. “Now, in the summer, it’s just so variable,” Kurtz said. “You see places where the floes are a lot more broken up; you see a mixture of places where the snow has melted, and you see bare ice, and various depths of melt ponds … you see these patches all over of ice in different stages of melt.”

While scanning floes cracked into pieces and blotched with ponds of melted water, Kurtz noted different shades of white—signs of ice or snow on top of the ice—and brown, maybe due to embedded algae. Colors reveal the ice depth: the deeper the blue of the pond, the thicker the ice where the melting occurred. Most ponds, then, connect to each other with circling black rivers that flow into the open sea.

Kurtz and his team measured changes in the ice elevation and surface temperatures and created color maps of sea ice. Eventually, they will correlate the measurements of polar ice with two other NASA satellite campaigns: the Ice, Cloud and Land Elevation Satellite, or ICESat, which operated from 2003 to 2009, and its successor, ICESat-2, scheduled to launch by 2018. The Barrow expedition gave a glimpse into what ICESat-2 will be able to observe in the Arctic in the summertime, since the laser altimeter IceBridge carried is similar to the one that will be aboard ICESat-2. Overall, these measurements will improve studies of sea ice thickness in the Arctic and will give us a better sense of the extent and pace of climate change.