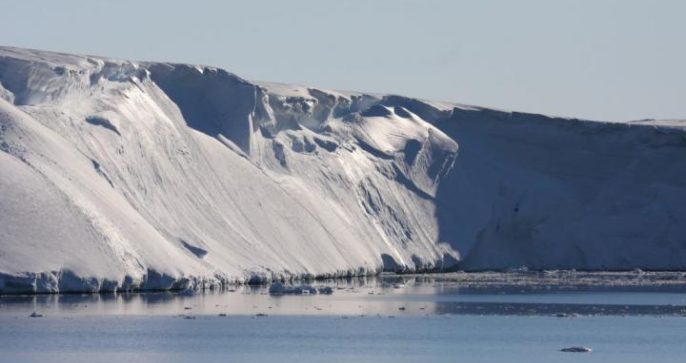 Totten Glacier is losing ice, and the warm ocean water causing this has the potential to also push the glacier back to an unstable place.

A warmer climate attacks polar glaciers at both ends of the Earth. In the Arctic, ponds of meltwater speed up the overall melting process, but in Antarctica, currents of warm water erode the ice sheet beneath the surface. Recent observations revealed that ice sheet erosion in two Antarctic regions is deep enough to expose basement rocks. At current rates, the erosion could trigger instability in a major Antarctic glacier, ultimately leading to more than 2 m (6.56 ft) of sea level rise.

What Is a Grounding Line?

Because ice covers about 99 percent of Antarctica, almost all its glaciers end in the ocean. These glaciers can be grounded or can end in floating ice shelves that move with the tide. Glaciers that end in the ocean are called tidewater glaciers, and the point where they begin to float is called the grounding line.

Scientists keep grounding line locations under constant observation, because mass loss from Antarctica is strongly linked to changes in the interactions between ice shelves and their grounding lines: change in the grounding line can result in very rapid changes in glacier and ice shelf behavior. By looking at the position of grounding lines, scientists can study ice sheet dynamics and rates of melting and recession.

Climate variations cause ice sheets to retreat and advance, raising or lowering the sea level by meters or even dekameters. The basic relationship is unambiguous, but the timing, magnitude, and sources of sea level change remain unclear; in particular, the contribution of the East Antarctic Ice Sheet (EAIS) is ill defined, restricting our appreciation of potential future change. Several lines of evidence suggest possible collapse of the Totten Glacier into interior basins during past warm periods, most notably the Pliocene epoch, causing several meters of sea level rise.

A team of scientists from Imperial College London and institutes in Australia, the United States, and New Zealand looked at the changes of the grounding lines in two regions: the head of the Totten Glacier, within 150 km (93.21 mi) of today’s grounding line, and deep within the Sabrina Subglacial Basin, 350–550 km (217.48–341.75 mi) from the same grounding line. They focused specifically on the Totten Glacier, a significant glacier in Antarctica, because it drains one of the world’s largest areas of ice, the EAIS.

Last year, the team discovered that there is warm water circulating underneath a floating portion of the glacier and that it is causing more melting than would have been expected. Their new research, published in Nature on May 18 of this year, looks at the underlying geology of the glacier and reveals that if the glacier retreats another 100–150 km (62.14–93.21 mi), its front will be sitting on an unstable bed, and this could trigger a period of rapid retreat for the glacier. This would cause it to withdraw nearly 300 km (186.41 mi) inland from its current front at the coast. If climate change continues unabated, the glacier could cross a critical threshold within the next century, entering an irreversible period of very rapid retreat and releasing vast quantities of water.

The researchers’ results, based on International Climate and Environmental Change Assessment Project (ICECAP) aerogeophysical data, delimit the grounding line zones of two distinct, quasi-stable EAIS configurations, corresponding to the modern-scale ice sheet (with a grounding line near the present ice sheet margin) and the retreated ice sheet (with the grounding line located far inland). The transitional region of 200–250 km (124.27–155.34 mi) in width is less eroded, suggesting shorter-lived exposure to eroding conditions during repeated retreat and advance events, which were probably driven by ocean-forced instabilities. Representative ice sheet models indicate that the global sea level increase resulting from retreat in this sector could be up to 0.9 m (2.95 ft) in the modern-scale configuration and could exceed 2 m (6.56 ft) in the retreated configuration.

To uncover the history of Totten Glacier’s movements, the team looked at the sedimentary rocks below the glacier. From the geological record, they were able to understand the history of the glacier stretching back millions of years. They found that the glacier has retreated more quickly over certain unstable regions in the past. Based on this evidence, the scientists believe that when the glacier hits these regions again, they will see the same pattern of rapid retreat.

The EAIS is currently thought to be relatively stable in the face of global warming compared with the much smaller ice sheet in West Antarctica, but Totten Glacier is bucking the trend by losing substantial amounts of ice. The new research reveals that Totten Glacier may be even more vulnerable than previously thought. Retreating the full 300 km (186.41 mi) inland may take several hundred years, explains Professor Martin Siegert, codirector of the Grantham Institute at Imperial College London. However, once the glacier crosses the threshold into the unstable region, the melting will be unstoppable, at least until the glacier has retreated to the point where the geology becomes more stable again. “The evidence coming together is painting a picture of East Antarctica being much more vulnerable to a warming environment than we thought,” Siegert says. “This is something we should worry about. Totten Glacier is losing ice now, and the warm ocean water that is causing this loss has the potential to also push the glacier back to an unstable place. Totten Glacier is only one outlet for the ice of the East Antarctic Ice Sheet, but it could have a huge impact. The East Antarctic Ice Sheet is by far the largest mass of ice on Earth, so any small changes have a big influence globally.”