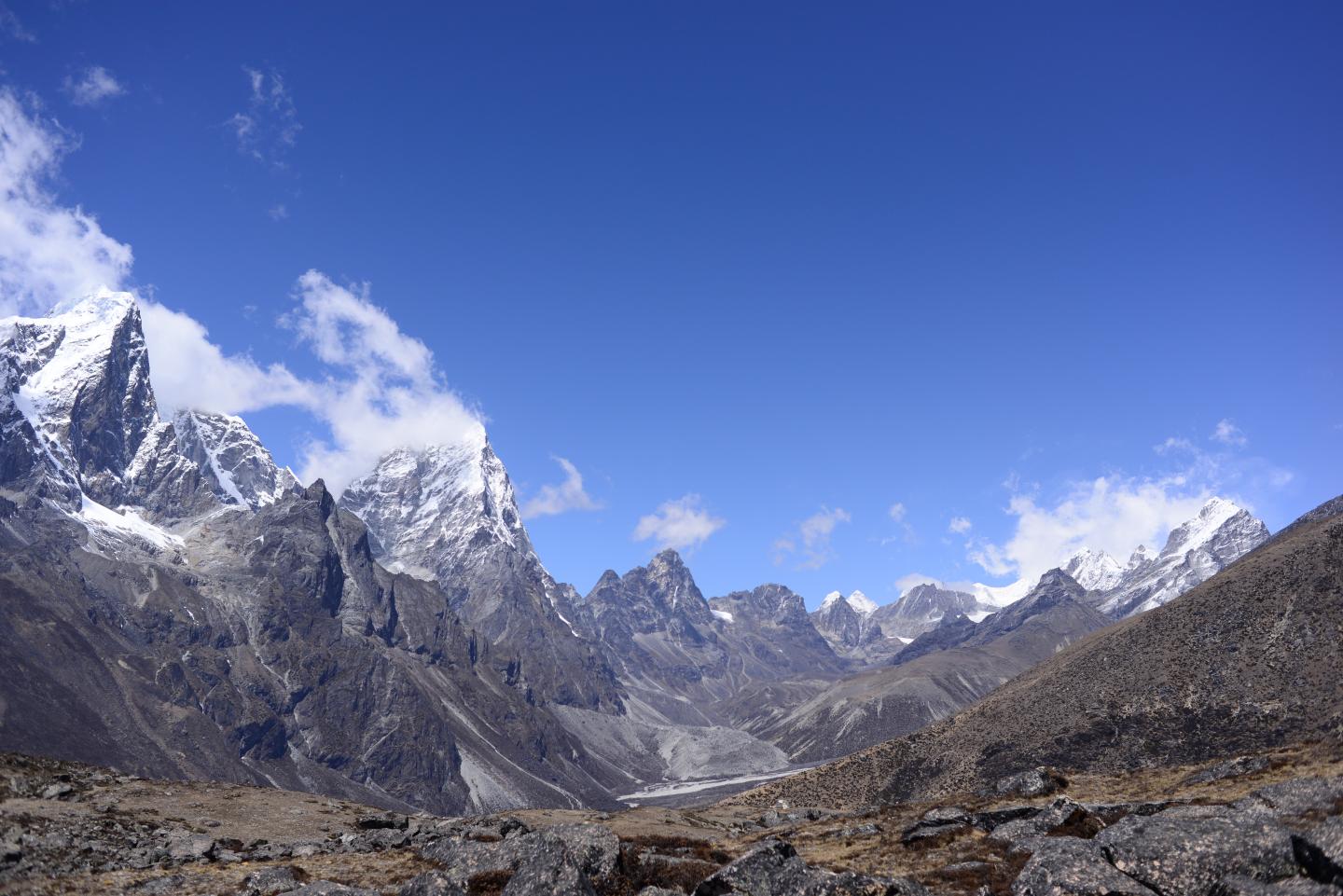 It’s hot outside! Climate change is heating up the planet, including the Himalayas, changing vegetation patterns and affecting the flow of water to people living at the base.

Humans aren’t the only ones climbing the highest peaks in the world these days. Thanks to warming temperatures, some areas around Mt. Everest that are normally covered in snow are getting greener. To a plant, that’s great news. But for the 1.4 billion people who live at the base of the Himalayas and depend on snowmelt for fresh water, the steady march of the stubby vegetation that inhabits the Hindu Kush Himalayan (HKH) region could be an indication of a crisis in the making.

High-altitude data mining in the Himalayas

Sometimes called the “third pole,” the HKH covers a huge swath of land from Afghanistan on the western border to Myanmar and China in the east. It forms the headwaters for 10 major river basins, and snow and ice pack from this region is an essential source of water for everyone and everything living below it—which is why it is so alarming that the HKH is warming faster than the rest of the planet is. Yet we know very little about how this warming is impacting its ecological systems. Scientists know that plants play a major role in the water cycle and that water supplies in the HKH are under threat from a changing climate, but more often than not, scientific research in the area has focused only on rising temperatures and shrinking glaciers.

To answer the question of how vegetation is being affected, researchers at the University of Exeter figured out how to use openly accessible NASA satellite imagery to accurately track the expansion of what’s known as the subnival zone. This unique zone is found in a remote area that lies above the tree line and below the snow line of the Himalayas. At 4,150 meters, only short grasses and shrubs can survive in this harsh environment. Outside of the growing season, the subnival zone is normally covered in snow and ice. But as temperatures continue to rise around the world, growing seasons are not what they used to be.

Because of the subnival zone’s inaccessible location, its ecology is the most poorly studied in the HKH. Much of the high-altitude research that scientists have done focuses on the changes to snow and ice cover. Before the University of Exeter team studied the photographic data, little was known about the current distribution of subnival plants in the Himalayas or their rates of change over time. A major reason for the lack of scientific research in this area has to do with the large volume of data needed to study changes in vegetation cover in such a large region over a long period of time. The standard method of studying satellite data is expensive and time-intensive. To work around these challenges, the team used the Google Earth Engine platform, which gives free access to public data from NASA Landsat satellite images.

FIND OUT HOW MOUNTAINS FORM: Mountains Form Between, Not During, Earthquakes

To measure the amount of subnival vegetation in the remote higher altitudes of the HKH, the scientists mined open-source photographic data and analyzed the amount of land covered by plants or by snow and ice. By studying the photographs, they were able to see small increases over time in the amount of subnival vegetation between altitudes of 4,150 and 6,000 meters. Their measurements also showed that subnival systems cover between five and fifteen times the area of permanent ice and snow in the HKH. Based on the evidence found in the satellite imagery, the scientists argue that the subnival zone vegetation most likely plays an important role in the water cycle of the HKH. However, not enough data exists to accurately predict the extent of the impact on the billions of people living downstream. This new method of data collection could be the key to finding the link between the vegetation and the water cycle.

As temperatures warm and the snow line recedes, the terrain becomes more favorable for plants that would otherwise be found only where the snow cover is seasonal. Documenting this spread of vegetation could help prepare for a major impact on the amount of snowmelt that makes its way down the mountains and into river systems. Increased plant cover and exposure of rock and soil could also change the carbon cycle of the HKH in unknown ways.

As temperature patterns around the world continue to shift, our understanding of the interplay between climate change and ecosystems must evolve. To find answers that will equip us to adapt to the changing climate, we need to start by asking the right questions. By studying the subnival zones of the Himalayas using open-access information systems as well as on-site data collection, the researchers believe we can gain a more complete picture of the impact of global warming on the water supply in this populous region and how it might change in the coming decades.

This study was published in the journal Global Change Biology.

Featured image by Karen Anderson: View towards Khumbu and Cholatse from below Ama Dablam at about 4,900 m showing typical subnival vegetation in the foreground.