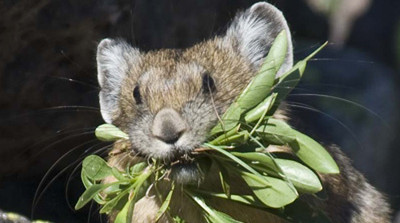 The beloved American pika is losing its habitat. These little animals could loose 75 percent of their range quite soon to climate change.

The American pika is a small animal with a big personality that has long delighted hikers and backpackers. Sadly, pikas are disappearing from low-elevation sites in California mountains, and the cause appears to be climate change, according to a new study from the University of California at Santa Cruz.

Researchers surveyed 67 locations where pikas have been known to live and found that the animals have disappeared from ten of them. That’s a 15 percent decrease. Pika populations are predicted to go locally extinct in areas with increased summer temperatures, says Joseph Stewart of UC Santa Cruz.

Pikas are small herbivores related to rabbits that live in fields of broken rock (called talus) in the mountains of western North America. They have high metabolic rates and thick fur. Pikas even have fur on the bottoms of their feet, so they are well adapted to life in cold temperatures at high elevations. Pika’s don’t hibernate during winter. Instead, they spend the summer gathering grasses and wildflowers to store in their burrows. They then spend the winter munching their way through the stockpile.

“Backpackers and hikers often see pikas scurrying back and forth across the rocks, gathering little bouquets of wildflowers in their mouths,” Stewart tells us. “They are uniquely adapted to cold temperatures, but these same adaptations make the species vulnerable to global warming.”

When summer temperatures are too high, pikas are forced to stay underground to avoid overheating. Less time spent foraging means they don’t have as much food to eat, which reduces the chances of the pikas surviving the winter.

“It looks like we’re going to lose pikas from many areas where people have been used to seeing them. It’s a loss not just for the pikas but also for future generations who won’t get to have that experience,” Stewart says.

The researchers have used their data to predict the fate of the species in the face of ongoing global warming. By 2070, the prediction is that pikas will have disappeared from much of their historical range in California.

What Can We Do?

The shrinking range of pikas is just one example of the probable negative effects of global warming on plant and animal species around the world. Other high-elevation species are also vulnerable and could lose a much larger proportion of their range. “Pikas are a model organism for studying climate change, and their decline at low-elevation sites suggests that the future for other species is not great, either,” Stewart says. “The problem is that the climate is changing faster than species can adapt or disperse to new sites.”

Pikas and other high-elevation species can respond to warming temperatures by moving to higher elevations. But in many locations the mountains just aren’t high enough to provide a refuge from warming temperatures for high-elevation species. The data predicts that only the highest peaks of the Sierra Nevada, including Mt. Shasta and the White Mountains, are likely to remain suitable for pikas through the end of the 21st century.

RELATED: IS CLIMATE CHANGE CAUSING THESE MOOSE TO SHRINK?

Featured photo: Pikas spend the summer gathering grasses and wildflowers to store for winter food. When summer temperatures are too high, the pikas can’t forage. (Photo by Chris Ray)