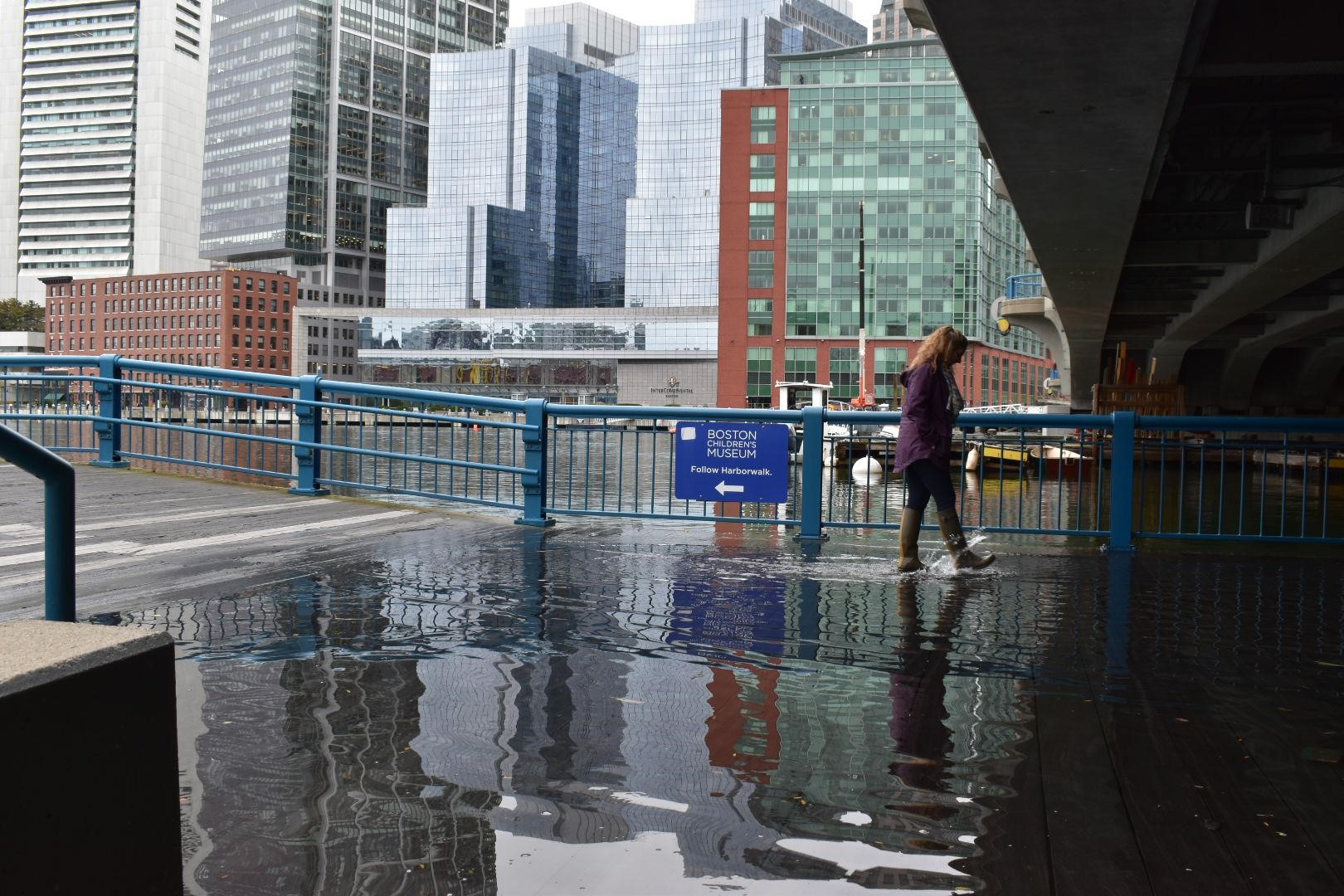 King tides happen when the Earth, Sun and moon align, sometimes creating “sunny day flooding.” To understand how sea level rise will change future flood patterns, researchers and citizen scientists are teaming up to map areas that are already impacted.

Wicked high tides, also known as king tides or astronomical high tides, are a natural phenomenon that occur several times a year in certain areas around the globe. In the Boston area, these events usually happen in March and October. This is when there is a full or new moon, and the Earth, Sun and moon align to create an extremely high tide. These events are often associated with greater flooding, sometimes called “sunny day flooding” or “nuisance flooding.” These floods happen regardless of storms or precipitation, and can cause roads, sidewalks or certain areas to be impassable.

Take part: RSVP for the an open, online forum about climate hazards.

If these events already occur naturally, what can we do about them? Wicked high tide events give us a glimpse into what our future will look like as sea levels rise under climate change. Learning exactly what areas are already flooding will help resiliency planners know where to focus their efforts in minimizing sea level rise in their communities.

Today, 40 percent of the American population lives near a coast. Flooding events can cause major social, economic and environmental impacts by interrupting businesses, damaging transportation, buildings and the coastal environment. High tide flooding has increased in the U.S. on average by about 50 percent compared to 20 years ago and 100 percent compared to 30 years ago. In Massachusetts, for example, sea levels have already risen eight inches since 1950. The rise in sea levels makes tidal flooding and coastal erosion more likely, and further increases the risk to coastal communities from storm surges due to hurricanes.

If these events already occur naturally, what can we do about them? Wicked high tide events give us a glimpse into what our future will look like as sea levels rise under climate change. Learning exactly what areas are already flooding will help resiliency planners know where to focus their efforts in minimizing sea level rise in their communities.

What is the Wicked High Tides program?

In the summer of 2019, MOS studied the impact of extreme heat and the urban heat island effect through citizen science. Nicknamed “Wicked Hot Boston,” the pilot year recruited members of the general public to participate in the ISeeChange project and urban heat mapping and then asked them to share their experiences and potential solutions. The program’s success inspired other, similar programs focused on environmental hazards, such as Climate-Conscious Durham with the Museum of Life + Science in Durham, North Carolina.

In the second year of the project,  the MOS team focused on the extreme hazard of sea level rise with the catchy nickname “Wicked High Tides.” In 2020 and 2021, the project involves the citizen science projects MyCoast and ISeeChange.

MyCoast invites participants to document tides, storm damage, beach cleanups and more via their app, and ISeeChange asks citizen scientists to investigate how weather and climate change impact their lives and community by sharing photos and stories about multiple hazards, including sea-level rise. In addition, the project involved a webinar and two deliberative forums; one in person and one online.

What is Citizen Science?

Citizen science is public engagement in real scientific research, most often by collecting data or analyzing data for ongoing research projects. SciStarter connects a community of over 100,000 citizen scientists with thousands of different projects spanning astronomy, health, biodiversity and everything in between.

Via the portals on SciStarter.org/NOAA, SciStarter works with the museums and science centers, as well as the project leaders for featured projects, to walk patrons through the process of engaging in an ongoing environmentally-focused citizen science project to better understand a particular climate hazard. The goal is to introduce them to a forum or another event for further engagement.

All citizen scientists who participated in ISeeChange and MyCoast via the Museum of Science, Boston’s SciStarter microsite were invited to participate in a climate hazard resilience forum on sea level rise. The first forum was held in person on March 3, 2020 and the second forum was held online due to Covid-19 on November 10, 2020.

Forum programs engage participants in deliberative, inclusive conversations about issues that lie at the intersection of science and society. These programs allow Museum visitors, scientists and policymakers to share their perspectives and learn from one another.

This project uses the climate hazard resilience forums, and the goal of the forums is to explore potential vulnerabilities to city infrastructures, social networks and ecosystems from sea level rise, extreme precipitation, drought and extreme heat, then discuss potential strategies for addressing these threats. Participants learn and discuss stakeholder values, consider the trade-offs of various resilience strategies, make a final resilience plan, and then view an interactive StoryMap that visualizes how their plan will affect the city and the people who live there.

Snehal Pandey, a student from the Berklee College of Music, attended the in-person event and said it would change the conversations that she had with friends. Her classmate, Nathhania Pasila, a freshman pianist from Jakarta, echoed the sentiment. She said the event opened her eyes, because she didn’t realize that there were multiple ways and equally valid choices about how to manage water. From her perspective as a musician, Pasila thought she could use her platform as a way to “treat the planet better.”

Once the tables were done discussing the resilience strategies they would implement in the anonymized Town of Kingtown, they turned their attention to the front of the room where Julie Wormser, the Deputy Director of Mystic River Watershed Association gave a presentation on how sea level rise affects the Boston area and what resilience strategies have been, or are going to be, employed in Boston to mitigate sea level rise. Finally, the participants were able to talk to eight local community groups who work daily on sea level rise issues about how to be part of the solution.

Reverend Vernon K Walker, a participant in the project and collaborator with the Museum of Science, Boston forum team in both the extreme heat and the sea level rise projects, is an organizer of Communities Responding to Extreme Weather. He attended the in-person forum event. Walker’s organization fosters resilience hubs, places where people can take refuge from climate impacts, and provides other services related to resilience — for example, cooling centers in the summertime, emergency preparedness kits for flooding. “We’re a statewide organization, and we know that there is going to be more in-land flooding,” said Walker. “Projects like this prove the point that this is going to get worse with climate change. It’s critical that this information is captured.”

This work is still ongoing. Over 20 sites across the United States have been accepted to receive a stipend to implement the NOAA funded Citizen Science, Civics, and Resilient Communities (CSCRC) project between March and September 2021. This program model will increase resilience to extreme weather and environmental hazards through citizen-created data, local knowledge and community values.

And thanks to NOAA Grant NA15SEC0080005, more than just museums and science centers are using the free forum materials. Brittney Beck, Assistant Professor of Education at California State University, Bakersfield, used the forum materials with a group of educators, who were exploring new resources for their students. “As I facilitated each phase, I noticed their conversations became increasingly nuanced,” she said. “The teachers transitioned from talking about sea-level rise in abstraction to engaging in an intense, interdisciplinary debate regarding how to address it.”

After the Forum facilitated by Beck, one teacher reflected, “I knew about the potential of sea-level rise, but I never had an emotional reaction to it until now. I want to empower students to do something about climate change.”

The 20+ museum and science center sites will participate in citizen science projects and climate hazard resilience forums over the next year. If you are close to any of these host institutions, we encourage you to participate in citizen science and attend a “Climate Hazard Resilience” Forum near you. And no matter where you are in the world, you can study environmental impacts with citizen science and take part in one of the open, online forums. Stay up to date on all the projects at SciStarter.org/NOAA.

Take part: RSVP for the an open, online forum about climate hazards.

David Sittenfeld is Manager of Forums and National Collaborations at the Museum of Science.  David has been an educator at the Museum for 20 years and oversees special projects pertaining to issues that lie at the intersection of science and society. He is also completing his doctoral research at Northeastern University, which focuses on participatory methods and geospatial modeling techniques for environmental health assessment and public engagement.

Caroline Nickerson is a Program Manager at SciStarter.