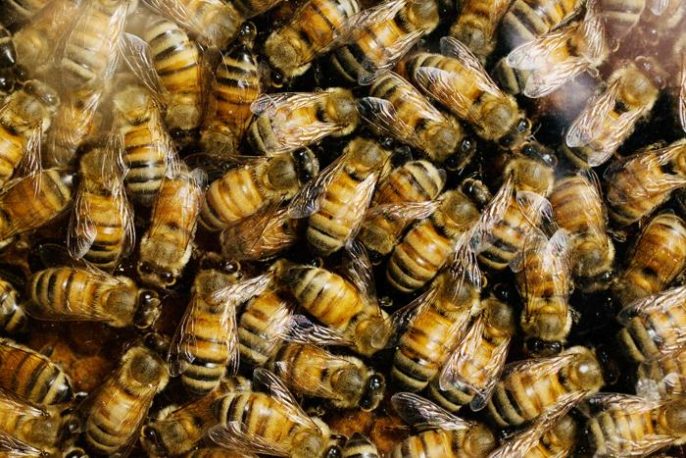 Scientists found that honeybees are attracted to fungicides and herbicides. Honeybees have a deadly attraction to the chemicals in Roundup.

Whenever you eat fruits, vegetables, and nuts, take a moment to thank honeybees for their pollination services that contribute $17 billion to the US economy each year. In fact, almonds are almost solely dependent on honeybees for pollination. Populations of these much-needed pollinators have mysteriously plunged over the past decade, and many studies suggest a link to the use of neonicotinoid insecticides among other factors such as climate change and disease.

Recently, scientists found that honeybees prefer sugar water laced with the fungicide chlorothalonil and the herbicide glyphosate (a.k.a. Roundup) at certain concentrations over sugar water alone.

“We were quite surprised,” says May Berenbaum, senior author of the study and entomology professor at the University of Illinois. “We didn’t expect bees even to detect the presence of herbicides or fungicides, much less to display a (paradoxical) preference.”

When foraging honeybees (Apis mellifera) bring back nectar collected from flowers to their hives, bees in charge of food storage signal to them which foods they prefer. Some chemicals in nectar and pollen produced by plants attract bees, while others deter bees and other visitors. Honeybees, in turn, have their own preferences and can distinguish and avoid food that contains toxic substances. In agricultural surroundings, nectar may have traces of chemicals such as herbicides and fungicides that are frequently used on crops to kill weeds and fungi respectively.

Fungicides do not only affect fungi; they can also affect physiological processes in insects because fungi are more closely related to animals than plants, explains Berenbaum.

The effect of herbicides and fungicides on bees remains largely unknown. Initially, the chemicals were assumed to be safe for bees, but more studies are revealing negative effects on bees. A 2017 study found that foraging honeybees directly exposed to sprayed fungicides were three times more likely to die than those that were not exposed.

Why are honeybees are attracted to fungicides and herbicides?

To determine whether honeybees prefer certain chemicals, Berenbaum’s team set up outdoor flight cages where free-flying honeybees were allowed to interact with their nestmates from the hive and could choose to collect sugar water from two feeders placed on opposite ends of the cage. At one end, the team placed a feeder with sugar water laced with the test chemical, while the feeder at the other end contained sugar water mixed with a solvent. These feeders were interchanged from time to time to ensure their location was not affecting the bee’s preference.

The researchers tested nine chemicals that bees normally encounter in plants and hives along with two herbicides—atrazine and glyphosate—and three fungicides—boscalid, chlorothalonil, and prochloraz.

The results were unexpected. Apparently, honeybees area attracted to fungicides and herbicides. The bees preferred sugar syrup laced with glyphosate—the herbicide produced by Monsanto commonly known as Roundup—at a concentration of 10 parts per billion, as well as sugar syrup laced with the fungicide chlorothalonil at 0.5 and 50 parts per billion.

Instead of avoiding fungicides and herbicides, says Berenbaum, the bees were consuming more glyphosate and chlorothalonil at these concentrations. She points out that this means “the risk of ingesting a toxic dose is higher than environmental levels might indicate.”

But from an evolutionary perspective, this might be expected. Honeybees are active from spring to fall, but during this entire period, there is no single floral source that they can feed on, so they have to seek new food sources. “Unnatural chemicals might be a signal for a new food,” explains Berenbaum.

Toxicity depends on the dose

Fungicides are usually applied to crops when flowers are blooming and at night to avoid directly exposing honeybees and other pollinators while they are busy at work. But on the next day, the authors point out, the concentrations of the residues could in fact attract pollinators, which could be problematic for managed populations of honeybees.

Honeybees might be particularly vulnerable to pesticides; research shows that European honeybees have a limited set of detoxifying enzymes to metabolize toxic chemicals. Although fungicides and herbicides may not be very toxic on their own, when they interact with other pesticides and synthetic chemicals applied to crops, their toxicity can increase.

A 2013 study found that fungicides affected the ability of honeybees to metabolize acaricides, pesticides used by beekeepers to kill the parasitic mite Varroa destructor that attacks honeybees. With a reduced ability to metabolize toxic compounds, even a small dose can be deadly, warns Berenbaum.

The team is now investigating how the bees are able to detect the pesticides.

The study that informed this article was published in the journal Scientific Reports.

Featured image: Fungicides are among the top contaminants of honey bee hives and can interfere with the bees’ ability to metabolize other pesticides. Credit: L. Brian Stauffer.