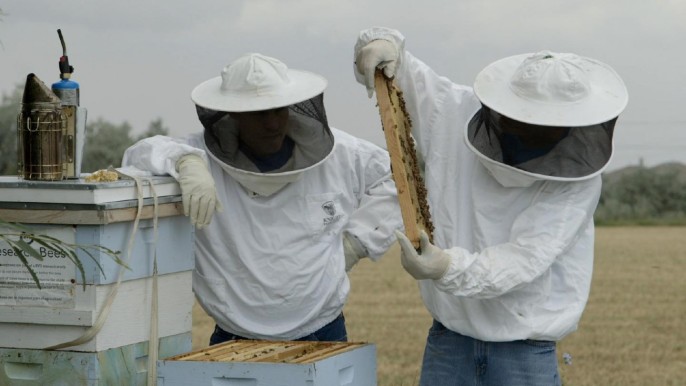 For several decades, honey bees have been ravaged by a deadly disease that kills their babies and leads to the collapse of entire hives. The disease is called American Foulbrood and its effects are so devastating and infectious that beekeepers often have to incinerate infected hives.

Saving the honey bees from Foulbrood is complicated because the disease can rapidly evolve to resist antibiotics and other chemical treatments. For the past few decades, beekeepers have been losing hives at an alarming rate with no cure in sight. Losing entire hives not only disrupts the honey supply, but reduces the number of bees for pollinating all of the plants that people need to eat and breath. In short, we need the pollinators.

Researchers at Brigham Young University in Utah have developed a natural way to eliminate the scourge, and it appears to be saving the honeybees.

The research team is using tiny killer bugs known as phages to protect baby bees from infection. Like a virus, the phages infect and kill the harmful bacteria without harming the baby bees.

“Phages are the most abundant life form on the planet and each phage has a unique bacteria that it will attack,” said Sandra Burnett, BYU professor of microbiology and molecular biology. “This makes phage an ideal treatment for bacterial disease because it can target specific bacteria while leaving all other cells alone.”

So far so good. But while phages are plentiful in nature, finding just the right phage for the job takes a lot of hunting. That’s where student Bryan Merrill comes in.

Merrill has been researching ways to treat American Foulbrood since beginning his studies at BYU, so he approached Burnett with hopes of researching treatment for the disease.

“This bacteria has been a problem in honeybees for a long time,” Merrill said. “It infects the larva when they’re teeny tiny. Even a few spores will infect and they’ll start eating the larva from the inside out. It doesn’t hurt the adult bees, but all of the sudden the bees can’t replenish the population and the hive just collapses.”

When hives are infected, beekeepers generally treat their hives with antibiotics. However, this is usually only a temporary solution. If the bacteria returns, as it often does, it is resistant to the antibiotics. At that point, beekeepers have to choose between burning the hive or trying phage treatment.

“Phage is a great alternative to antibiotics, and it’s a natural alternative because phages exist in nature on their own,” Burnett said. “And just the nature of a phage itself is that it’s self-replicating at the expense of the bacteria. It multiplies itself so there are more of them to hunt down the bacteria. Then as soon as the host is gone, the phage just disappears.”

Once they identify the perfect phage, Burnett, Merrill and other students replicate it in the lab so it can be applied to the hive in a sugar-water solution. Like a virus, the phage get to work infecting the harmful bacteria until the bacteria are dead, thus saving the honey bees.

After a lot of hard work on gene sequencing and analyzing, Merrill has identified five phage candidates for honeybee treatment. He has named them after former BYU basketball players Abouo, Davies, Emery, Jimmer1, and Jimmer2. The results of this work have been published in the biotechnology journal BMC Genomics.