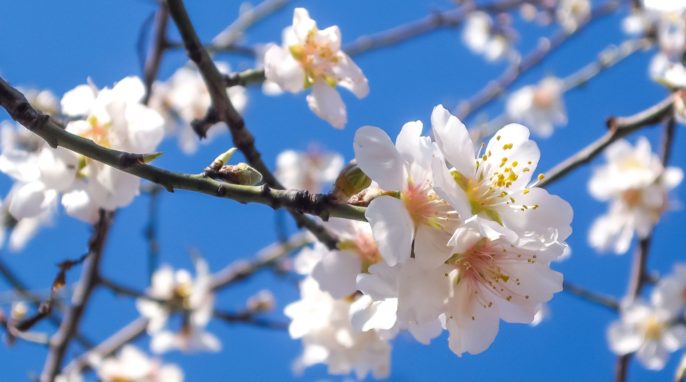 While the demand for almonds is growing worldwide, honeybee populations have been steadily declining. Are almond-growing fungicides causing bee deaths?

Americans have a serious obsession with almonds. In 2016, 1.2 million metric tons were grown worldwide, and 80% of that was grown in California alone. As our taste grows for the protein-packed nut, a looming crisis threatens not only the almond crop, but the global food industry as a whole. Over the last decade, honeybee populations, which are necessary for sustaining a healthy almond industry, have been steadily declining. The reasons for the decrease are not fully clear. What if our rabid consumption of this tasty snack is contributing to the mass die-off of these crucial pollinators? Researchers at Texas A&M University wanted to find out.

As people look for ways to include healthier foods in their diets, worldwide demand for almonds and almond-based products has expanded rapidly. U.S. farmers are working hard to keep up with growing industry demand. California alone employs around 60% of all the managed honeybee hives in the country to pollinate the crop. In order to protect the trees from various diseases, farmers typically spray them with fungicides and pesticides when they are in bloom. Because the spraying happens at the same time that honeybees are working to pollinate the trees, scientists at Texas A&M University were concerned about the effects of the chemicals on the honeybees. Since almond trees rely almost entirely on honeybee pollination to grow nuts, the shrinking honeybee population has many farmers worried about the future of the industry.

Not much is known about the effects on honeybee health of fungicides used on almond trees. In theory, fungicides should only be harmful to the fungus they are designed to kill. But scientists began finding chemical residue in samples of pollen, wax, and honey from honeybees that pollinated crops treated with fungicides. Certain fungicides were even found in the adult honeybees themselves. So the Texas A&M researchers set out to study if the most common fungicides used on almond trees were also directly killing honeybees.

The results were alarming. Regarding bee deaths, honeybees that were sprayed with fungicide were two to three times more likely to die than those that were not sprayed. Combinations of fungicides had a more deadly effect on the honeybees than did a single fungicide, and trials that were conducted later in the year had higher mortality rates than those done in warmer months. Researchers point out that the honeybees have weaker immune systems during the winter, and this could be the reason that there were more bee deaths during trials conducted in colder months.

Scientists aren’t sure exactly how the fungicides kill honeybees, but chemicals from certain fungicides have been found in beeswax taken from hives. These chemicals are likely from contaminated pollen that honeybees carry from the almond flowers back to the hives. The pollen on the bodies of the honeybees then makes its way into the wax as the honeybees produce it. If this is the case, honeybees that collect treated pollen and then carry it to many different hives run the risk of widespread contamination. Honeybees are also more susceptible to parasites after they have been exposed to fungicides. In fact, honeybees that eat pollen contaminated with fungicides may be three times more likely to be infected by a certain deadly parasite.

The scientists believe that fungicides should be studied more closely in order to identify the exact mechanisms that cause bee deaths. In the meantime, they say that farmers can use more sustainable practices such as not spraying fungicides when the almond trees are blooming. They can also spray when honeybee activity is low, like in the late evening. These methods could help to decrease the effects of fungicides on honeybee colonies. As the world’s population keeps growing, our demand for food crops such as almonds will only continue to grow. It is clear that more research on sustainable farming practices is needed to support a healthy honeybee population, and in turn, a healthy food supply for generations to come.

The Almond Board of California has responded to this article with a statement of the group’s commitment to honeybee health. The Board expresses support of almond orchards as safe places for honeybees. For the past five years, it has been adapting its practices to avoid the use of fungicides when bees and pollen are present in orchards.

According to Gabriele Ludwig, Director of Sustainability and Environmental Affairs at the Almond Board of California, “The Almond Board of California has engaged and continues to actively engage with beekeepers, researchers, and other pollination partners. Relevant research findings have been translated into the Almond Board’s Honey Bee Best Management Practices (BMPs), a comprehensive guide for farmers and other pollination stakeholders to protect bees during the almond pollination season and beyond.” These guidelines address the issue of iprodione, citing a University of California recommendation to avoid its use during almond bloom due to research showing it can affect young, developing bees. If iprodione is used, the guide recommends that it be applied only in the late afternoon or evening when bees and pollen are not present.

Emily Rhode is a freelance science writer and municipal water resources educator. Her goal is to make science accessible and interesting for everyone. She has worked as an outdoor environmental educator, science teacher, and professional communicator and trainer. You can follow her on Twitter @riseandsci.