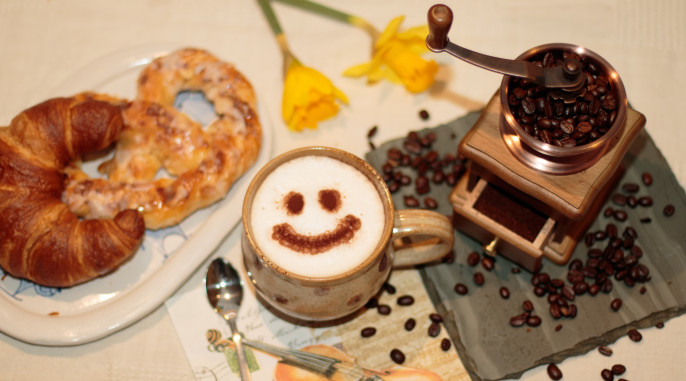 Can you imagine living on nothing but coffee? Some of us would probably like to at times, if not for the taste then for the buzz the caffeine brings.

Caffeine makes us feel more alert because it structurally resembles a molecule called adenosine. The longer we stay awake, the more adenosine accumulates in our brains, binding to the receptors that induce the sleepy feeling we all get after a long day. Adenosine is the body’s way of signaling to the brain that it has had enough and needs to shut down for a while. If you disagree with your body’s desire for rest, the ingestion of caffeine can help. Due to their structural similarity, caffeine binds to adenosine receptors, but unlike with adenosine, those receptors do not execute the signal to shut down when bound to caffeine. In other words, the body is trying to throw a pass to sleep, but caffeine blocks the receiver.

But that’s not all. Caffeine also ramps up adrenaline production, which increases your heart and breathing rates and primes your brain and muscles for action. You feel a boost from coffee not only because caffeine blocks the signal to sleep, but also because it fools your body into thinking it is under attack.

As with other drugs, people can build up a tolerance to caffeine, requiring more and more of the drug just to achieve the sensation of that original buzz. And the road to addiction is a short one, indeed. People who fail to consume their routine amount of caffeine can experience withdrawal symptoms such as headache, irritability, anxiety, and—naturally—fatigue.

No, humans can’t live on coffee

How much coffee can people safely drink? According to the FDA, 400 mg (4 cups) of brewed coffee per day appear to be safe for most healthy adults. While it is estimated to take about 140 cups (8-oz size) of coffee to kill a person, a toxic level can be reached more quickly with pure caffeine powder. A single tablespoon can be lethal, prompting the FDA to issue a warning to consumers.

But there is a creature on Earth that can tolerate much, much more caffeine. In fact, it eats coffee berries for breakfast. And lunch. And dinner. Amazingly, the coffee berry borer (Hypothenemus hampei) eats nothing but coffee berries!

Scientists have recently discovered how the coffee berry pest can tolerate toxic levels of caffeine. Does it possess a special gene that can detoxify caffeine? No. Does it have receptors that do not bind to caffeine? No. Evidently, the answer does not lie in the genome or the brain of the beetle, but in its gut. Like most other living creatures, the coffee berry borer houses a microbiome in its intestinal system. Several species of bacteria that reside in the gut of the coffee berry borer, such as Pseudomonas fulva, are wizards at breaking down caffeine.

RELATED: HOW TO DRINK COFFEE IN SPACE

The gut bacteria from coffee berry borers found around the world were put into a culture medium containing caffeine as the primary nutrient so researchers could identify which species grew the best in this condition. P. fulva was the most common species remaining after culture; subsequently, this bacterial species was found to carry a gene known to degrade caffeine.

To further test this hypothesis, researchers gave the beetles antibiotics to deplete their intestinal microbiome. Beetles without their usual gut bacteria lost the ability to break down caffeine. When fed some P. fulva before their coffee berry diet, the beetles excreted no caffeine, indicating that they were able to detoxify it once again.

The scientists speculate that altering the beetle’s microbiome might provide a new approach in the battle against this pest. However, antibiotics are a precious commodity used in treating human disease. Furthermore, this could be a reckless idea, as the introduction of antibiotics into the field has the potential of generating resistant bacteria.

From an evolutionary perspective, the study serves as an example of how organisms can adapt to a new niche without genetic modification. By acquiring specific types of bacterial symbionts, the coffee berry borer is uniquely able to live on nothing but coffee.

Dr. Bill Sullivan is a professor of Pharmacology and Toxicology and of Microbiology and Immunology at the Indiana University School of Medicine. He studies the biology of parasites as a means to develop new treatments for infectious disease. Learn more about his research at sullivanlab.com. Dr. Sullivan routinely blogs about science and pop culture at THE ‘SCOPE. Follow Dr. Sullivan on Twitter @wjsullivan.