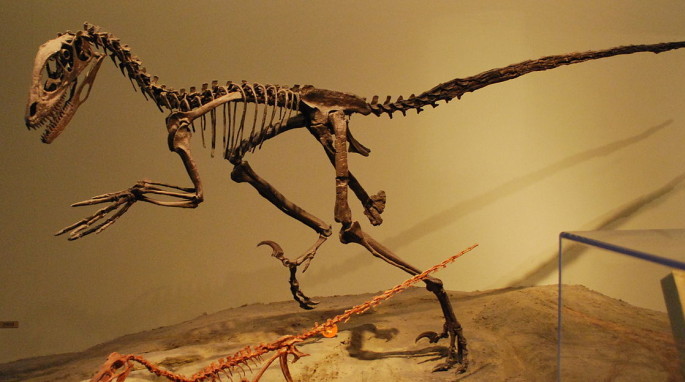 Deinonychus antirrhopus was discovered by paleontologist J. H. Ostrom in the Cloverly Formation in Montana in 1969. What else is known about this dinosaur?

A dinosaur now known as Deinonychus antirrhopus was discovered by paleontologist J. H. Ostrom in the Cloverly Formation in Montana in 1969. Three sets of Deinonychus remains lay around the partial remains of a Tenontosaurus. This led Ostrom to suggest that Deinonychus was a social animal and a predator, hunting more like modern wolves and lions than like crocodiles and Komodo dragons as previously thought. His claims about Deinonychus being a pack hunter were rejected by most paleontologists then, because they believed that cold-blooded reptiles with relatively small brains weren’t capable of hunting in packs. Understanding of paleontology has come a long way since then.

What Do the Researchers Say?

Ostrom describes Deinonychus as a “bigger and more corpulent version of Archaeopteryx.” He compares the skeletal anatomy of Deinonychus to that of modern birds. After examining the bone structure, Ostrom found that the bones of Deinonychus lack bone rings, which are typical in reptiles. Bone rings appear because of their rapid growth and great physical activity of reptiles during summer and their hibernation and physical inactivity during winter. The lack of bone rings indicates that Deinonychus may have been active during the whole year and could make its own body heat, just like modern birds.

Examining the inside of an animal’s skull can reveal the size and shape of each part of the brain. The size of the optic lobe of the brain of Deinonychus indicates that it may have had even better vision than that of modern raptors. Its large nasal cavities, in turn, suggest a powerful sense of smell.

But, despite the keen senses of sight and smell of Deinonychus, the thing that fascinated Ostrom the most was its cerebrum. It was proportionally larger than the cerebrum of most other avian dinosaurs. Thus, Ostrom was able to argue that dinosaurs were less like slow, lumbering lizards and more like agile, intelligent birds.

Ostrom gained worldwide notoriety for his claim that modern birds are dinosaurs. He was not the first to suggest this. The hypothesis that birds are descended from dinosaurs was pioneered by O. C. Marsh, who discovered Ornithomimus, and T. H. Huxley, who discovered Compsognathus.

Ostrom’s research during the 1970s started the age of paleontology called the “Dinosaur Renaissance.” Ostrom’s colleague Robert T. Bakker wrote a book of the same title, describing the many discoveries that paleontologists made during this period. For example, according to a 2009 study by Bakker, Deinonychus may have been able to sniff out a herd of Sauroposeidon up to 50 km away.

The brain of Deinonychus may have been its strongest weapon. Compared to the rest of the head, the brain was proportionally one of the largest among the maniraptorans. According to Witmer et al., the part of the brain used for communication was large enough for Deinonychus to communicate vocally. Modern birds use different sounds to express different feelings, warn others that danger is coming, and call to others. Deinonychus may have been able to communicate while hunting, protecting fellow hunters, and sharing strategies.

When Deinonychus was first examined, paleontologists thought its front limbs were used for grabbing and holding. This led several scientists, including Dale Russell, to speculate that if extinct maniraptors had continued their evolution until the present day, they might have ended up looking a bit like humans. These imagined maniraptoran descendants were nicknamed “dinosauroids.” Thomas Holtz disagreed, arguing instead that their descendants would have looked much more like a modern bird than like a human. Not surprisingly, the “dinosauroid hypothesis” is entirely rejected today.

What Were Those Claws For?

The front limbs of Deinonychus were formed much like the alula (manual digits fused together which form the base for the wing feathers) in modern birds, with a very light, nearly fragile, pneumatic structure. The phalanxes were elongated, each with a small, curved claw. Paleontologists speculate that Deinonychus could climb trees, thanks to these hook-like claws.

It was originally thought that Deinonychus and its maniraptoran relatives used their claws to rip the belly of its prey. This theory is now rejected because phalanx claws seem more adapted for cutting the trachea than for ripping the belly. The claw was a thin, knife-like structure similar to modern raptor claws, while belly-ripping demands much wider and much more massive claws to slice through the gastralia (an extra row of small ribs thought to have been useful for defense) and thick stomach muscles. Paleontologists have also suggested that these claws were used in mating displays or in fights during the mating season.

How Fast Was Deinonychus?

Ostrom speculates that Deinonychus was capable of reaching tremendous running speeds, based on the ratio of leg bone size in its maniraptoran close relatives, Ornithomimosaurs. These calculations of speed are now questioned, as new Achillobator giganticus and Balaur bondoc materials from the Nemegt and Hatzeg Formations reveal that the legs of dromaeosaurids were probably designed to provide strength more than speed and agility. This theory was first stated by paleontologist Matthew Martyniuk in 2010, but has faced a lot of criticism. So, it is not yet conclusive whether the legs of Deinonychus were built more for strength or for speed.

Brian Switek and Lawrence Witmer use modern felines as an example of a variety of behaviors in a single group of animals. For example, tigers can reach speeds of up to 50 km per hour, while cheetahs can sprint up to 110 km per hour. It is still quite possible that Deinonychus was a very fast runner, despite its close relatives being more like boxers than sprinters.