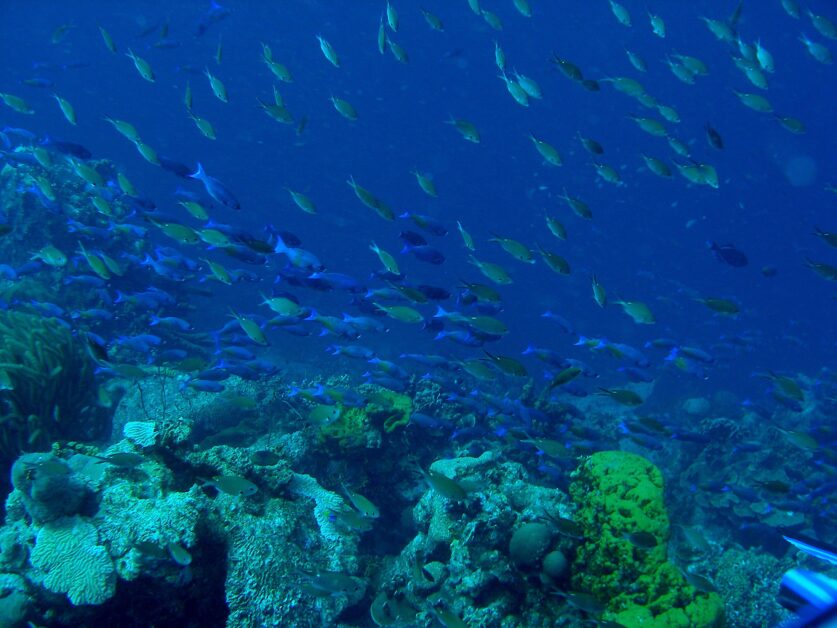 Many of the harms done by climate change and overfishing are worst near the surface. Could coral reefs relocate deeper to escape them?

Every informed citizen of planet Earth knows that our oceans are facing a number of problems caused by humanity. Among these are human-made climate change, overfishing, and trash. Is there a way to escape from these problems for the animals living among the coastal coral reefs? Specifically, do the fish and corals living in the coral reefs of the tropics have such an escape avenue? These coral reefs have the highest biodiversity in the ocean, with the greatest number of fishes, corals, sponges, and many other groups of animals. The relatively intact survival of coral reefs would save more species than the survival of any other part of the ocean. Naturally, the best way forward would be to reduce or eliminate all these nasty environmental problems, but are there ways nature can help itself by at least temporarily escaping the trouble humanity causes it?

Many of the human-made problems in the ocean are more pronounced near the surface. Climate change leads to a change in seawater temperatures, which is harmful for marine organisms (we will discuss the interesting details in a few paragraphs). Since it’s the increased air temperature that heats the ocean, the shallowest parts of the ocean are the most affected. Overfishing, meaning fishing to the extent that populations cannot recover sufficiently, is more pronounced near the surface as well. Specialized modern fishing gear can reach parts of the ocean up to 1000 meters deep, but the majority of fishing effort targets much shallower sections of the seas.

Enter the mesophotic refuge hypothesis. “Meso” means middle and “photic” means light-related (the same word stem as photography). The mesophotic zone then is the depth range of a reef where the light levels are at mid-strength: not as bright as in the sun-flooded shallow reefs, but not as dark as in the near-pitch-dark twilight zone below. The mesophotic zone is usually defined as the range of depths between 30 and 150 meters. Could marine animals take refuge from the warming ocean surface, and from intensive fishing, in the mesophotic zone? Is this a place where populations of fishes and corals could hide out from the problems caused by humanity? Is it a safe haven for biodiversity, away from the stressors caused by us?

Sounds too good to be true? Unfortunately, it is, for the most part.

The special feature which sets corals apart from their relatives the anemones and jellyfishes is that they harbor small, single-celled algae within their tissues. The corals provide the algae with a safe home, protected from the many tiny animals (just slightly bigger than the algae) which want to eat them. The algae in turn provide valuable nutrients to the corals. This relationship between corals and algae (called Symbiodinium) is called a mutualistic symbiosis. Most corals, especially the reef-building hard corals with their solid calcium carbonate skeletons, can’t survive without their algae for too long—they will essentially starve to death.

When water temperatures rise, the biological process that creates energy from sunlight, photosynthesis, goes into overdrive in the algae. As a consequence, they also produce more toxic chemicals as by-products. The corals are forced to get rid of their algae to avoid being poisoned. The process is reversible, but deprived of this valuable energy source the corals can only survive for a few weeks. This process is called “coral bleaching,” because the corals lose their colors when they lose their algae. Since water temperatures are the warmest near the water surface, coral bleaching typically affects shallow-water corals the most.

So why don’t corals escape this problem by simply growing at deeper depths where the water is a tad colder? The problem is that the sunlight reaching these deeper depths is also weaker, and of a slightly different type. Anyone who has ever tried to take photographs underwater without a strobe will have noticed that their photos show a distinct blue hue. The warmer, reddish colors are lost to absorption by the seawater. The algae living in some species of corals can use this bluer light, but typically not the ones originally at home in the shallows. Many species of corals are depth-specialists, evolved to do well only in a relatively narrow range of ocean depths. Shallow-water corals can’t deal with the environmental conditions in the mesophotic reef zone.

But would the mesophotic refuge hypothesis work for fishes? After all, they can easily swim up and down the water column within a few minutes, in contrast to corals which grow on the same piece of rock their whole adult lives. Nevertheless, many fishes are also depth specialists. They eat specific types of corals, sponges, and algae growing on the reef at one particular depth, so only certain species of reef fishes can thrive at mesophotic depths. During a survey of the mesophotic fishes in the vicinity of Malapascua Island in the Philippines, we found two undescribed species of gobies (small, usually bottom-dwelling fishes) on a single dive to 100 meters. We didn’t have the chance to capture a specimen, but one of the fish has since been described with the scientific name Trimma meranyx. The fact that during one deep dive into the mesophotic realm we found more than one type of fish not yet known to science is anecdotal evidence of how distinct the fish fauna at these depths is from the fishes in the shallows.

Only larger, predatory fishes like sharks and jacks are seemingly flexible in the depths they live and hunt in. A number of scientific studies have observed higher numbers of these large predators in the mesophotic parts of coral reefs, as well as species of sharks which are rarely, if ever, seen in the shallows. For these big boys the deep, mesophotic reefs can at least partially serve as a refuge.

No substitute for conservation of coral reefs

Ecosystems are complex assemblages of many different species interacting with each other and the physical environment in unique ways. It would be surprising if it were possible to save the coral reef ecosystem by simply hoping its animals will move to deeper depths. There will be no alternative to reducing the environmental impact of humanity on the oceans if we want to preserve their biodiversity in the future.

Dr. Klaus M. Stiefel is a biologist, science writer, and underwater videographer and photographer originally from Vienna, Austria, and presently teaching at Silliman University in the Philippines. Klaus’s latest popular science book The Lives of Gobies came out in spring 2022 with Asian Geographic. His underwater imagery is on display online under the social media handle “Pacificklaus.”