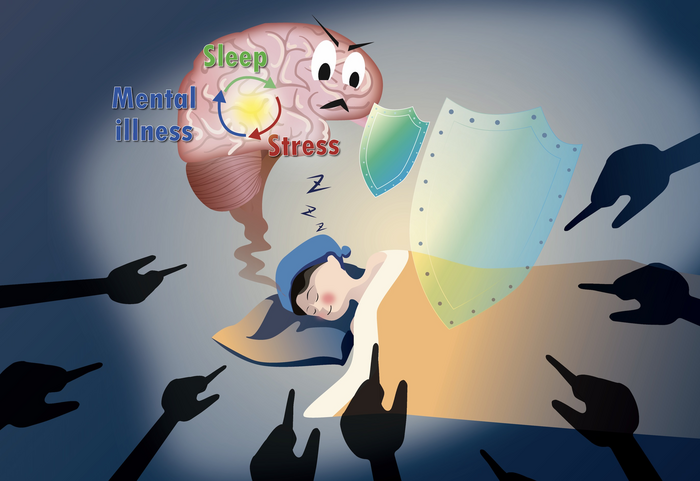 Scientists explored how stress can induce sleep in mice and uncovered the brain cells involved in the process.

From an early age, we hear about the importance of adequate sleep; we are told that we must sleep well to function well. Studies back up this advice, finding that sleeping well helps reduce anxiety and stress. Unfortunately, being stressed can also cause insomnia and start a vicious cycle where sleeplessness leads to increased stress and worsening insomnia.

However, recent experiments on mice have shown that stress can induce a helpful kind of sleep in certain circumstances! Since many features of sleep are similar in mice and humans, this new information could mean that stress might be able to help us get restorative slumber and break the vicious cycle.

Researchers from Imperial College London and institutions in China have discovered a specific set of neurons (a type of brain cell) that can induce sleep in response to stress. These cells can prompt non-rapid eye movement (NREM) and rapid eye movement (REM)—also known as the dreaming phase—types of sleep in response to stress. Inhibiting these neurons reduces stress-induced sleep which results in increased anxiety and increased levels of the stress hormone, corticosterone. These findings could provide valuable new information for treating anxiety and related disorders.

The connection between sleep and stress—the story so far

Scientists know that short-term stress activates specific regions of the brain which quickly increase the levels of stress hormones in the blood. Long-term expression of these hormones and memories of stressful experiences can have detrimental effects on a person’s health. Even though stress can cause sleeplessness (which may itself lead to more stress), stress has been found to activate the REM, or dreaming, phase of sleep. In rodents such as mice, sleep is induced when the mice are exposed to specific forms of stress. This acts as a built-in stress reliever.

Some background on sleep

Sleep has two phases: NREM and REM. NREM has three stages, N1-N3, with each stage contributing to deeper sleep than the previous stage. These phases are defined behaviorally and distinguished using electroencephalography (EEG), which detects brain cell activity using electrodes placed on the scalp. Since brain cell activity varies during these phases, EEG patterns can help scientists learn about them. In the REM phase, rapid and jerky eye movements are interspersed with phases of no movement, hence the name rapid eye movement. This phase is associated with dreaming.

Read more: What do you think about when you sleep?

In their study—published in the academic journal Science—the researchers set out to uncover the mechanism that causes stress to induce sleep. Mice were exposed to bully mice that induced a form of psycho-social stress called social defeat stress (SDS). This stress can induce anxiety and depression-like symptoms in mice and cause social avoidance. It was known previously that SDS could induce sleep, but the exact mechanism was unknown.

Researchers reasoned that a region in the brain called the ventral tegmental area (VTA) could have a role. The VTA has been found to regulate responses to social contact, reward, aversion, and goal-directed behaviors. It also regulates sleep-wake cycles and responses to stress. In mice exposed to SDS, heightened activity was observed in the region of the brain involved in stress response, including the VTA. Scientists were then able to pinpoint the specific neurons in the VTA that got activated by SDS.

To understand the impact of these neurons on SDS-induced sleep, researchers studied the mice’s NREM and REM sleep patterns. For this, they attached electrodes to the mice to detect brain cell activity. They found that NREM and REM sleep were elevated in response to SDS. However, inhibiting the neurons involved in the process reduced stress-induced sleep, and destroying them completely abolished it. These findings indicate that SDS activates specific types of neurons that can induce sleep as a response!

Next, the researchers wanted to study the impact of stress-induced sleep on anxiety-like behavior in mice. They used two different tests: open-field tests and elevated plus-maze tests. These tests record where and how much the mice move in a field or maze. When mice are stressed and anxious, they move about less and prefer closed, dark spaces.  When the neurons activated by SDS were destroyed, increased anxiety-like behaviors were observed in the mice during these tests. Researchers also measured stress hormone levels in these mice and found that they too were increased when the neurons activated by SDS were destroyed. Stress hormone levels were measured using blood-serum-based assays.

This study elegantly demonstrates how social distress stress (SDS) can induce sleep via specific neurons in mice. For the mice, this acts as a stress-reliever by reducing anxiety and stress hormone levels! Since sleep operates in a similar manner in both mice and humans, this study adds to our knowledge of how stress and sleep are related. An important finding from this study is the identification of the specific neurons involved in stress-induced sleep. Targeting the specific neurons involved in this phenomenon could hold a key to combating anxiety and depression disorders.

This research article was published in the peer-reviewed journal Science.