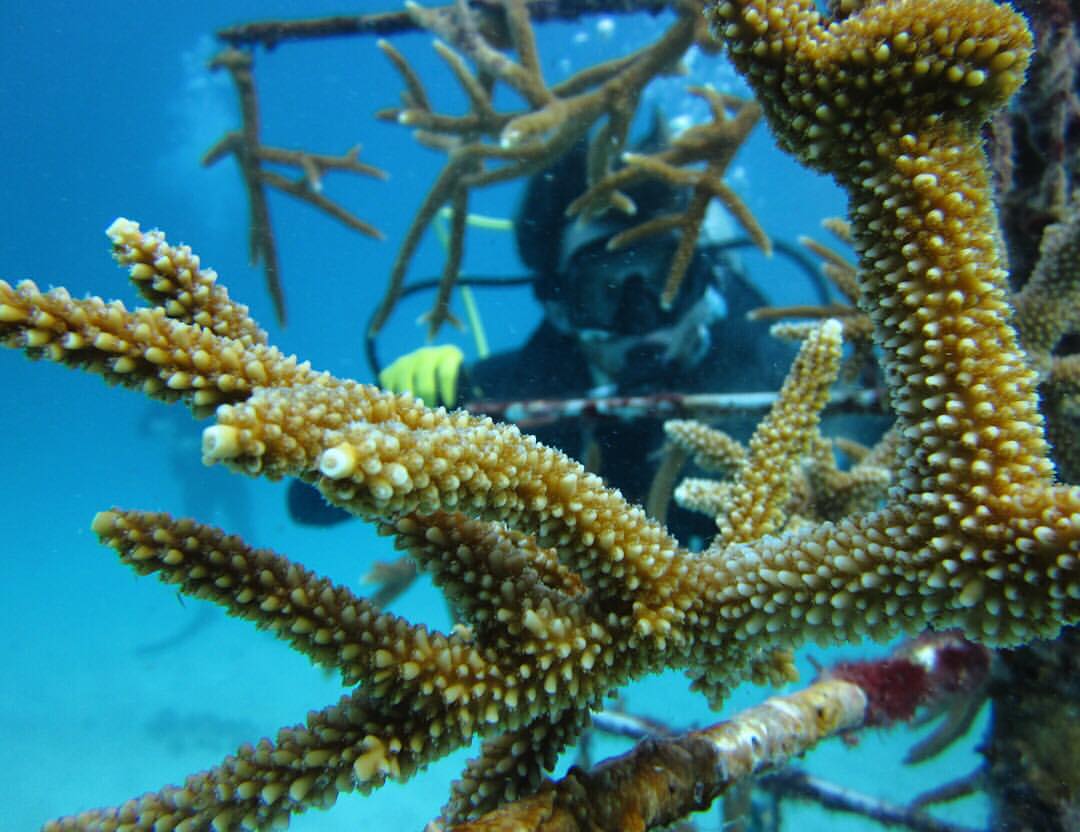 Are you wondering how climate change is impacting coral reefs around the world? This roundup of articles will answer your questions.

A Rosy Future for Pink Sea Fan Coral? – The world’s reefs are in trouble with one possible exception. This coral species appears to be making the best of a bad situation. In many respects, coral reefs and climate change do not go together. The news – both scientific and journalistic – abounds with stories of ocean acidification and coral bleaching as temperatures rise and oxygen becomes more scarce underwater. For some species teetering on the edge of extinction, these tales are more than cautionary.

How Can Caribbean Corals Cope with Climate Change? – The planet is warming. This is a fact we should all be aware of by now. As a result of this warming (and other human-caused stressors such as overfishing and nutrient pollution coupled with disease), coral reefs are in decline globally. Corals are animals that live in a symbiotic relationship with algae from the genus Symbiodinium.

Underwater Gardening: Coral Reefs and Aquaculture – Our oceans are home to most of the world’s biodiversity, and 25 percent of its diversity thrives in coral reefs—that’s about two million species that call the reefs their home. But as reefs suffer the effects of climate change and globalization (several Caribbean reef-building species are now considered endangered), their ecosystems suffer, too. Rescue a Reef is a coral restoration project by UM Rosenstiel School scientists. The project is carefully rescuing coral reefs restores underwater habitats.

Coral Gardening Effectively Restores Staghorn Corals – Staghorn corals (Acropora cervicornis)—a threatened species that resembles deer antlers—are effectively restored by coral gardening, a process that involves cutting coral fragments from healthy, wild donor colonies, rearing the coral fragments in underwater nurseries, and reattaching them onto degraded reefs, finds a study conducted in the Caribbean. The study demonstrates that current restoration methods are very effective, that no excess damage is done to donor colonies, and that once outplanted, the corals behave like wild colonies. Stephanie Schopmeyer, a coral biologist at the University of Miami and lead author of the study says that “findings from this study can be used to develop program-specific benchmarks for coral restoration programs throughout the Caribbean and worldwide.”

Coral Bleaching: Reefs Continue to Suffer – NOAA has announced that the third global coral bleaching event is underway. Find out what you might be able to do to help save the coral reefs. Waters are warming in the Caribbean, threatening coral reefs in Puerto Rico and the U.S. Virgin Islands, scientists report. As record-high ocean temperatures cause widespread coral bleaching across Hawaii, National Oceanic and Atmospheric Administration (NOAA) scientists have confirmed that the same stressful conditions are impacting the Caribbean and may last into 2016, prompting the declaration of the third global coral bleaching event ever on record.

Copying Coral to Contain Heavy Metal Pollution – Coral’s characteristically colorful tentacles, while attracting tourists and SCUBA divers with their unique beauty, are both the animal’s greatest strength and weakness. Although these structures have evolved to efficiently absorb nutrients from the water, they also let in toxic heavy metals like mercury, lead, or cadmium, which industrial manufacturers are pouring into the oceans in increasing quantities.

However, scientists may have found a way to reduce heavy metal concentrations in oceans and prevent coral and other animals (including humans) from absorbing harmful levels of the toxins. Researchers led by Dr. Xianbao Wang at the Anhui Jianzhu University in China have developed a material made of aluminum and oxygen that naturally grows in a shape similar to the complex coral structures. This artificial coral easily absorbs heavy metals in water and its growth process is simple enough to allow for large-scale manufacturing.

Recipe for the Perfect Coral Reef – The latest health check on the world’s reefs wasn’t all doom and gloom; it’s shown us we have a plan for preservation that works. To understand how humans and corals can co-exist in perfect harmony, an honest assessment of our current relationship had to be done. Dr. Aaron McNeil and his team at the Australian Institute of Marine Science, gauged the health of 832 reefs from all over the world using a measure of biomass per hectare. Biomass is the total mass of organisms in a given area although not the sole indicator of reef health, biomass provides an easily obtained, universally comparable estimate that’s perfect for a study of this magnitude.

Featured photo by Rescue a Reef program, via Dalton Hesley.