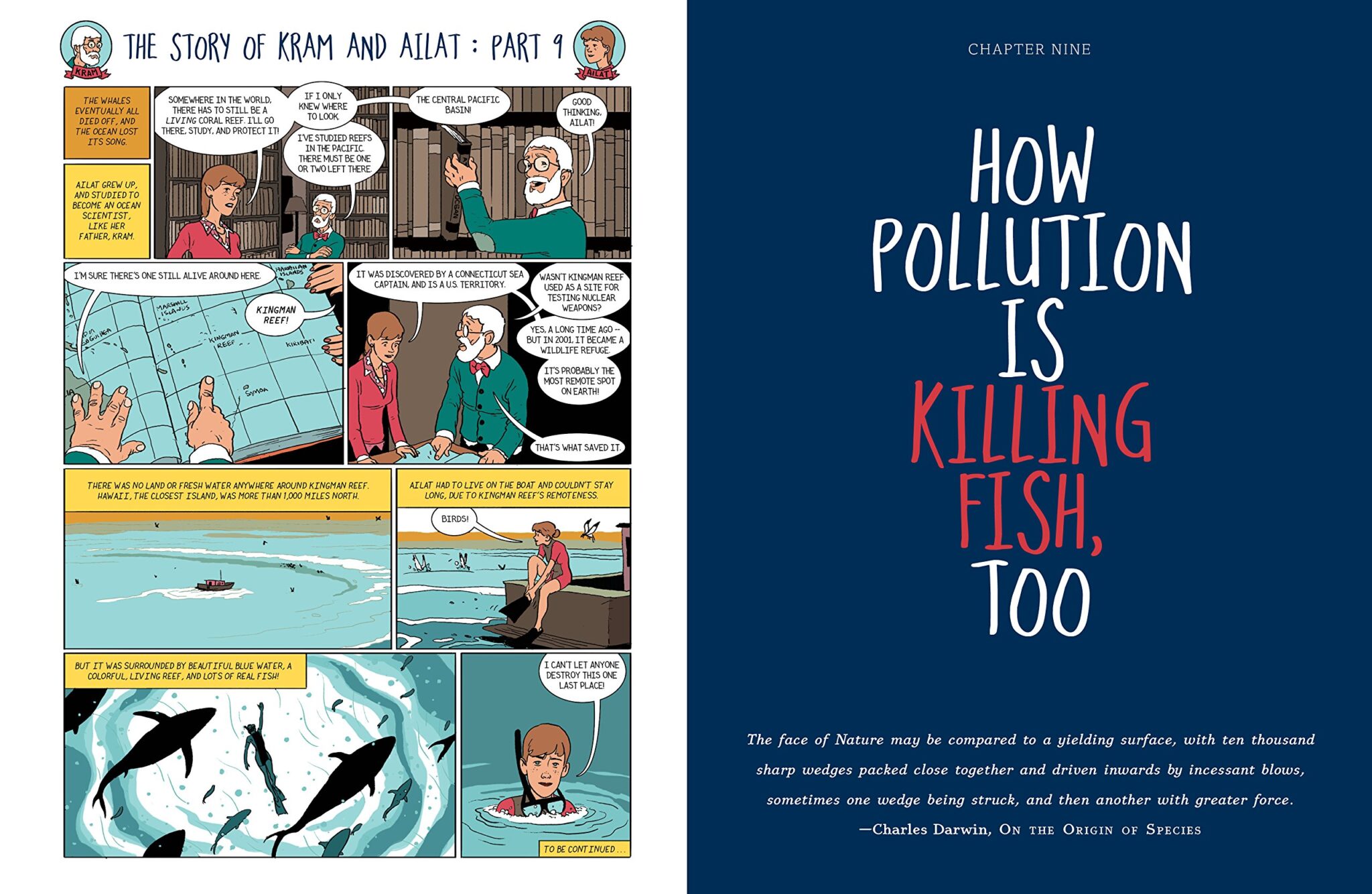 Day-to-day encounters of fish—at the grocery store, visiting an aquarium—passively reinforce a notion of triviality about aquatic life until we are prompted to take a pause and spare a thought for a breathtaking world beyond the shore. This month’s selection in our ongoing book review series, World Without Fish, prompts such reflection; however, as the pages turn, we witness the marine world’s vulnerability alongside its majesty.  Through Mark Kurlansky’s words and Frank Stockton’s art, we are challenged by the crisis of disappearing biodiversity in our oceans.  This graphic novel reveals how inter-dependencies of aquatic systems, both within themselves and between them and the human world, are snowballing into an unwelcome reality.

Given the complexity of aquatic systems and the lives of fish, a number of citizen science projects on this topic have been developed, which are mentioned at the end of this review. World Without Fish provides a compelling account of the many problems fish face and might help readers identify areas where they can help and are most passionate.

Kurlansky and Stockton connect us to the creatures in danger and capture a beauty worthy of protection.  World Without Fish respects the complexity of the problem and encourages the reader to develop a wiser response to marine conservation.

Educators who seek to engage young adults in citizen science will find a wealth of topics for thought-provoking discussion.  The book offers a balanced narrative of the problem, addressing the threads between ecology, economics, and climate change. In turn, it also provides valuable inclusion of perspectives from all the characters who are held accountable for contributing to the problem.  Students will not only be equipped with knowledge to grapple with and argue for the gravity of the issue, but they will also be motivated to do so.

Learning through the medium of a graphic novel lends to an exceptionally immersive experience—the art melts into the writing, with brightly colored drawings harmoniously integrated into the text.  All the while, as the author fosters investment in the looming crisis, readers are confronted by a call to act. Kurlansky, an award-winning writer, explains human failings by citing Charles Darwin’s claim that a species’ main interest is in the survival of its own kin: “Being mammals, we tend to do a better job of protecting fellow mammals than protecting fish.”

In reading, we encounter the buttresses of inaction: denial of what is uncomfortable to acknowledge and apathy spurred from feeling unempowered.  When the book warns, “Most of the fish we commonly eat, most of the fish we know, could be gone in the next fifty years,” we are cued to overcome primal inclinations, to dare to engage and stomach the stakes involved.

A history of fish in eleven chapters

World Without Fish masterfully guides us through how can we make these choices in eleven chapters.  Kurlansky characterizes the problem through describing its origins in the fishing industry, the ecological processes to heed, and other aggravating human practices.  Chapter 1 chronicles the trajectory of marine biodiversity, picturing a future choked with jellyfish and plankton. It is followed by Chapter 2, which is an ode to the history and culture of fishermen.  Helpfully, Chapter 3 is a very accessible primer on the life cycles of fish and the ocean’s food web.

In Chapter 4, we read about conflicts between fishermen and scientists in the nineteenth century, which had long-ranging consequences. Fishermen reported rapidly declining fish populations due to the introduction of powerful fishing technologies, contradicting the scientific consensus that commercial extinction of a fish happens so far before biological extinction that the species will always eventually recover. Overfishing complications further emerge in Chapter 5, which details the global economic and political forces that make denying the problem perhaps too easy.  Chapter 6 invites readers to consider the culture of fishing towns and the people who are anxious to preserve a way of living. Here, we learn about fishermen’s nightmares of their livelihoods being eventually reduced to boats displayed as artifacts at a museum. Kurlansky examines the role of government, the fishing industry, and scientists in a way that is careful but decisive.

Chapter 7 offers critique on the interventions proposed by the fishing industry and regulators thus far, with solutions that range from fish farms and enforced quotas to self-regulation and rotating fishing zones. The book argues for sustainable fishing as the best solution in the following chapter. Near the close of the text, in Chapter 9, other human activities are identified as worsening the environmental damage in the world’s oceans. Pollution poisons fish and induces negative mutations that carry into future generations, and climate change also makes its appearance in Chapter 10, where we read about the rising temperature of the sea and melting ice that dilutes salinity, which has disastrous consequences for fish. Kurlansky concludes the book by pointing to the impact of simple intentionality when buying fish for meals and recommending involvement in different environmental groups for further advocacy.

Each chapter ends with an installment of a comic following the life of scientist Kram and his daughter Ailat as they observe changes in the ocean.  These stories help illustrate our relationship with the aquatic world and how our traditions will be affected by a world without fish. Kurlansky and Stockton have created rich fodder to inspire budding citizen scientists.  If current inaction is caused by a loss in the ocean’s luster in people’s minds, World Without Fish reinstates reader appreciation through providing a compelling narrative of what we would grieve.

World Without Fish and citizen science

After reading this book, you may be galvanized to increase understanding of marine life and conservation efforts. SciStarter’s Project Finder makes it easy to make a difference!  Through participating in citizen science projects located in the field, like Guardians of the Deep and Earthwatch, and in projects based online, such as Global Fishing Watch and Digital Fishers, you can help prevent a world without fish.

This review is part of an ongoing series of book reviews written by members of Dr. Ashley Rose Mehlenbacher’s research team in partnership with SciStarter. If you have a recommendation for a book to review, please contact SciStarter Editor Caroline Nickerson at CarolineN@SciStarter.org. This work has been partially supported by the Ontario Ministry of Research; Innovation and Science’s Early Research Award program; and the Social Science and Humanities Research Council of Canada Insight Grant program. Views expressed are the opinions of the author and not funding agencies.

–Patricia Balbon is a B.Sc. student taking the Society, Technology, and Values Option at the University of Waterloo, in Canada.  Her research interests involve studying open science, collaboration networks, and community values.