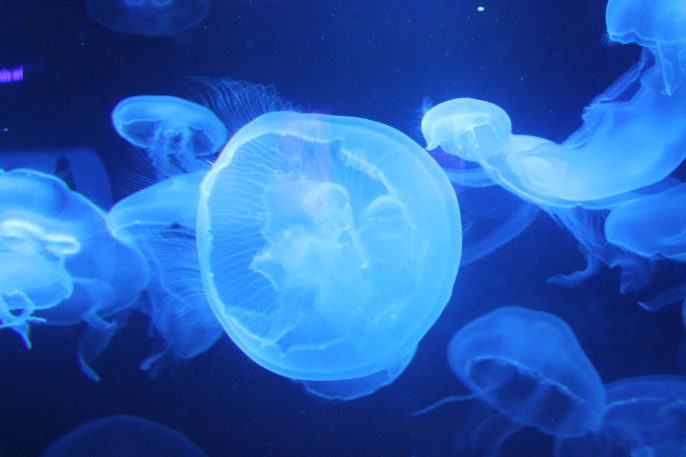 Some years bring massive jellyfish blooms. What causes these increases in jellyfish populations?

Jellyfish populations are a common nuisance to beachgoers in the summertime, but why certain years have massive jellyfish blooms while others do not is often a mystery. In recent years, some areas appear to have larger and more frequent blooms, so it is important to determine the causes of blooms in general, as well as whether jellyfish blooms are increasing.

Human activities such as changing our global climate, fishing, and increasing pollution or nutrients entering waterways influence the oceans in many ways. Some speculate that many of these changes in our oceans that would negatively impact most species actually would result in more jellyfish. We therefore wanted to look at the effects that humans might be having on jellyfish populations.

One major human-induced problem happening in our oceans is hypoxia, or low oxygen. These hypoxic areas have oxygen values that are too low for many marine animals to survive and breathe normally. Recent work has shown that in addition to the stress of low oxygen, these areas are often accompanied by reduced pH, where the water becomes slightly more acidic. Some evidence suggests that jellyfish can handle the stress of low oxygen or low pH alone, but it is important to consider the combined effects of low oxygen and low pH to reproduce the type of conditions that these organisms naturally experience.

What most people think of as a jellyfish is actually just one class of many jelly-like animals that live in the ocean, known as a scyphozoan or “true jellyfish.” Scyphozoans have very unique life cycles that alternate between the adults that we see floating in the water and the microscopic, bottom-dwelling polyps. Polyps reproduce by cloning themselves and producing more polyps, which can provide an easy way to determine how healthy a population is; in more favorable conditions, polyps will reproduce more.

To look at how low oxygen and low pH impact jellyfish, we performed an experiment with moon jellyfish polyps. The polyps were exposed to each factor individually as well as both combined, and we counted the number of new polyps that were produced. We also measured respiration to see if the low oxygen would affect the polyps’ metabolism.

After one month, we saw that the polyps were able to survive and reproduce in the low oxygen conditions, but they were reproducing at a slower rate. Surprisingly, lower pH did not affect polyp reproduction, and respiration wasn’t affected by either of the conditions. Overall, low oxygen had minimal effects on moon jellyfish polyps, which shows that the jellyfish polyps potentially could survive and still reproduce where other animals may not be able to.

One reason that the moon jellyfish polyps might be able to handle low oxygen or low pH is because of their jelly-like bodies. Jellyfish are made up mostly of water, so they don’t need to spend as much energy maintaining basic bodily functions. This allows them to grow quickly without much energy and might help them survive in more stressful conditions. Moon jellyfish are also found along many coasts worldwide, which most likely reflects an ability to live in a wide range of environmental conditions.

Humans are affecting the ocean in a multitude of ways, including by increasing agricultural runoff that lowers oxygen along many coasts. This lower oxygen and resulting lower pH will have various negative impacts, but jellyfish populations might be able to handle these stressful conditions better than other marine animals. While it is not confirmed that these changes in our oceans will cause more jellyfish blooms, human activities might be impacting where and when jellyfish bloom.

This study is published in the journal Marine Ecology Progress Series and was supported by the National Science Foundation (NSF) East Asia and Pacific Summer Institute (EAPSI) fellowship.

Laura Treible is a PhD candidate at UNC-Wilmington. Her current research focuses on early life stages of scyphozoan jellyfish (polyps and ephyrae) and their response to various environmental conditions and anthropogenic stressors. She enjoys teaching, working with students, and communicating science to her students and the public. Follow her on twitter @aqua_belle and read more about her research on her website: lauratreible.weebly.com.