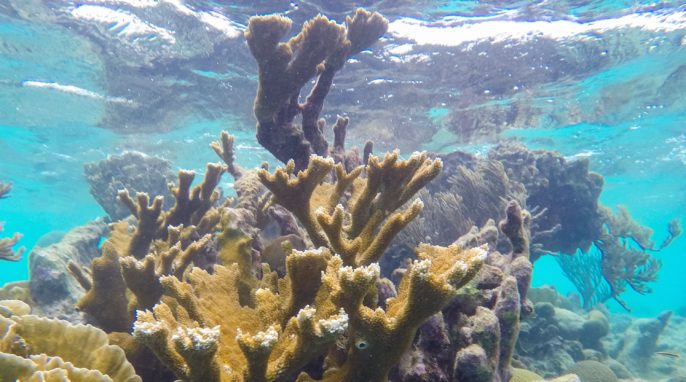 The planet is warming. This is a fact we should all be comfortable with by now. As a result of this warming (and other human-caused stressors such as overfishing and nutrient pollution coupled with disease), coral reefs are in decline globally.

Corals are animals that live in a symbiotic relationship with algae from the genus Symbiodinium. These symbionts are photosynthetic and transfer sugars to the coral host. While corals can also capture prey using their stinging cells and tentacles, most reef-building corals rely heavily on the symbiont for energy.

When temperatures increase too much, the symbiosis breaks down, and the symbiotic algae are expelled, leaving the coral without its major energy source. The coral is then left to use up its energy reserves and try to catch prey on its own. If this occurs for too long, the coral can die. Additionally, when the symbionts are expelled, the coral turns white in a process known as coral bleaching. White is the color of the coral skeleton, which can be seen through the tissue when no symbionts are present to provide pigment.

Since 2015, the Great Barrier Reef in Australia has seen two consecutive mass bleaching events (meaning most of the reef bleached) resulting in up to 33 percent mortality. For Caribbean corals, bleaching hasn’t been quite as bad recently, but coral cover has declined tremendously in the past 30 years, leaving most reefs looking like ghosts of their former selves.

My research is focused on figuring out why some Caribbean corals seem to be doing better than others in worsening conditions. What we have learned so far is that inshore, where it is warmer in the summers and the temperatures are more variable (a difference of 5–7 degrees Celsius over the course of the year) than offshore, we see fewer corals and less coral diversity. This is likely due to temperature, but other factors including nutrient runoff may play a role.

We followed up on this discovery by zooming in on two coral species that are present at all inshore and offshore reefs in Belize. We wanted to know if the Caribbean corals grew faster offshore in “better” conditions than they did inshore in “worse” conditions (higher temperatures and nutrients). We used a large drill to collect over 100 coral cores from various reefs around Belize, and then took them to the UNC Medical Center for CT scans, which allowed us to track the corals’ annual growth (they lay down seasonal growth bands similar to tree rings). We found that corals from inshore actually grew faster than corals from offshore until the last 10 or so years.

What makes these inshore corals grow faster? Could their metabolism be increased due to increased temperature? Would that be enough to offset the added stress of living in warmer water? These Caribbean corals feel temperatures predicted for all reefs by the end of the century. If we can identify what makes them resilient, we can help manage and protect other reefs as the climate continues to warm.

We decided to look at the symbionts first. The genus Symbiodinium contains many different lineages and species, and some of these species are more heat tolerant than others. A heat-tolerant symbiont is less likely to be expelled when subjected to bleaching conditions. We thought the inshore corals may have a higher prevalence of these heat-tolerant symbionts; however, they do not. In fact, it appears that temperature plays a major role in defining which symbiont is present in only one coral of the coral species we studied.

Overall, we found that inshore reefs are less diverse than offshore reefs likely due to the combined negative impacts of warmer and more variable temperatures along with increased nutrients. Yet, inshore corals grow faster than offshore corals even though they do not have more heat-tolerant symbionts. We suspect at this point that there is some kind of local adaptation or acclimation occurring in the inshore corals, meaning we think these corals are somehow adjusting to the environmental conditions present inshore. We are beginning an experiment in December 2017 to test this hypothesis.

—Justin Baumann is a PhD student at UNC Chapel Hill studying the impacts of climate change on Caribbean coral reefs. He is also a founder of and contributor on underthecblog.org, a marine sciences blog run by graduate students. See more of his writing at jbaumann3.wordpress.com.