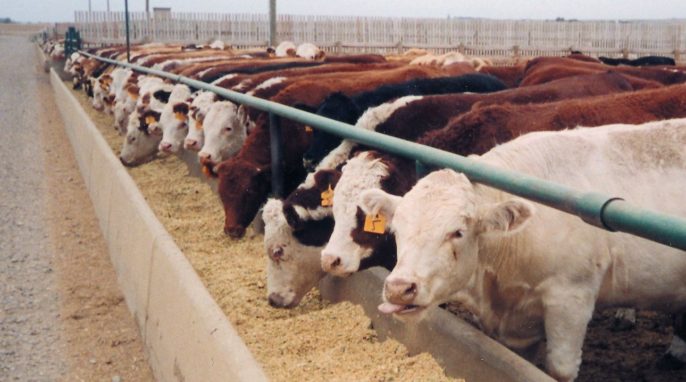 In a new study, researchers in the United States and Europe propose three measures—capping antibiotic use in farm animals, imposing a fee for veterinary use of antibiotics, and limiting meat intake—that, together, can reduce the use of antibiotics in food animals by up to 80 percent by 2030.

Overuse of antibiotics, particularly in animals for food, is the main cause of the spread of resistance whereby antibiotics lose their effectiveness, and infections become untreatable, leading to what many scientists call a post-antibiotic era.

“This scale-up in antibiotics, primarily as a substitute for good nutrition and hygiene in livestock production, is simply unsustainable and will be devastating to efforts to conserve the effectiveness of our current antibiotics,” explained Ramanan Laxminarayan, the study’s senior author and director of the Center for Disease Dynamics, Economics & Policy (CDDEP). “We already face a crisis, but continuing to use medically important antibiotics for growth promotion in animals is like pouring oil on a fire.”

And with growing demand for animal protein, the use of antibiotics is projected to rise by over 50 percent to 200,000 tons globally in 2030, as compared to the amount used in 2013. China uses the highest levels of antibiotics in food production, followed by the United States, and then Russia. Projected increases in antibiotic use by 2030 are highest for India (82 percent), China (59 percent), and Brazil (41 percent).

[tweetthis]Is it possible to reduce using antibiotics in food animals by 80%? Read about how it could happen by 2030.[/tweetthis]

How to reduce resistance to antibiotics

In an effort to curb antibiotic resistance, researchers outline a global strategy consisting of three interventions to reduce antibiotic consumption in food animals by 80 percent annually by 2030. These methods include regulating the use of antibiotics in farm animals by restricting the amount of antibiotics used in livestock, limiting meat intake to about one burger, or 40 grams (1.4 ounces), per person per day, and imposing a 50-percent user fee on the price of veterinary antimicrobials.

By limiting antibiotic use and introducing a fee on veterinary antimicrobials, the quantity of antibiotics used per animal can be reduced. Cutting meat consumption can help lower the number of food animals raised.

Even if the first measure—regulating antibiotics administered to farm animals—is implemented only in China and in the 35 countries from the Organization for Economic Cooperation and Development (which excludes India and Brazil), global consumption can drop by 60 percent by 2030. This would help decrease the impact on vulnerable subsistence livestock farmers in low- and middle-income countries.

But consumption in many low- and middle-income countries is rising dramatically. By 2030, antibiotic use in food animals in Uganda is projected to double, and in Vietnam, consumption is expected to go up three times the amount used in 2013. If low- and middle-income countries reduce their antibiotic use, they will have to make major improvements in farm hygiene to compensate, according to the researchers.

Curbing meat consumption to 40 grams per person per day can reduce the use of antibiotics in animals by 66 percent; however, this may be more difficult, the authors acknowledge, because average consumption in the United States currently is 265 grams (9.3 ounces, or 0.58 pounds) per day, and there is growing demand for animal protein in emerging economies such as India.

A more realistic target would be the EU-projected average consumption by 2030 at 165 grams (5.8 ounces, or 0.36 pounds) per day, which can still achieve global reductions in the use of antimicrobials by 22 percent.

Over a quarter of the world’s meat is consumed by China. In 2016, China’s government recommended its population halve their consumption to 40–70 grams (1.4–2.5 ounces) of meat per day in an effort to improve public health, but officials also pointed out the additional benefits of lowered carbon emissions.

According to the researchers, this measure would be easiest and quickest to implement, as opposed to regulations that are hard to enforce in low- and middle-income countries, and it could also facilitate tracking of the volume of antibiotics sold if imposed at the point of manufacture.

The researchers suggest that trade agreements can include restrictions on the use of antimicrobials. By reducing their antimicrobial use, low- and middle-income countries can also gain an advantage in export markets where consumers prefer meat from animals with low amounts of antimicrobials used.