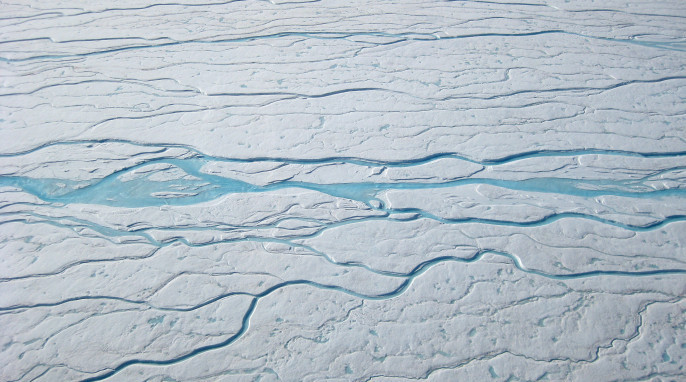 The Greenland ice sheets are losing their ability to retain meltwater, resulting in faster runoff of meltwater into the ocean.

Sea-rise levels caused by a warmer Earth may be higher than predicted, according to a new study. Meltwater from ice sheets at the poles is often blamed for rising sea levels. Now, scientists have discovered some more grim news: Ice sheets in Greenland are losing their ability to retain meltwater, resulting in faster runoff of meltwater into the ocean.

Meltwater from ice sheets does not always run off into the ocean. During summer when melting occurs, some of the water trickles down into the firn—a thick, porous surface layer of snow on the ice sheet that has not yet been compressed into ice—and refreezes, forming what glaciologists refer to as ice lenses.

“The firn layer of the Greenland ice sheet is about 50 to 80 m thick. As this layer is porous and the pores are connected, theoretically all the pore space in this firn layer can be used to store meltwater percolating into the firn whenever melt occurs at the surface. In this sense, the firn acts similar to a sponge,” explains Horst Machguth, the lead researcher of the study, from the Geological Survey of Denmark and Greenland.

Greenland was hit by a series of warm summers from 2010 to 2012, with 2012 being the warmest year with the largest melt ever recorded. In the spring of 2012, Machguth’s team drilled firn cores and were surprised find an ice layer right on the surface, which penetrated several meters deep. The porous firn layer, usually located on the surface, was below this ice layer. Similar ice layers on the surface were previously observed in the Canadian Arctic. But it was the first time the team has seen such a thick ice layer on the surface of the Greenland ice sheet.

The researchers decided to investigate this ice layer by mapping its extent and to see how the firn reacted to exceptional amounts of meltwater during the warm summers. In particular, they wanted to find out “whether the firn was indeed capable of retaining the meltwater, or whether the sponge had been overwhelmed.”

Machguth and his team ventured hundreds of kilometers into the western coast of Greenland and drilled firn cores 20 m long along several locations to analyze the changes occurring in the firn. They compared these findings with data on firn cores from 1997 and 1998 to see how the firn had changed in the past 15 years. Using radar, they also mapped the ice sheets over an area of 110 km.

For higher elevations, the team noted that more ice lenses formed because of water retention and deep percolation of meltwater, but at lower elevations, where the amount of meltwater is large, they noticed a thick layer of ice on top of the firn. The firn cores and radar profiles revealed that the ice lenses seen on the surface aggregated to form a thick ice layer that was continuous throughout the lower elevations of the site.

Prior to 2012, huge amounts of meltwater from a spate of warm summers had percolated in the firn and had refrozen, forming ice lenses. Initially, only a small number of lenses had formed. But after a few warm summers, the firn was overwhelmed with meltwater, which collected at a shallow depth, and many more ice lenses formed on the surface, growing several meters deep.

The large number of ice lenses formed an ice layer that acted like a lid on the spongy firn, hindering the percolation of further meltwater and forcing meltwater to run off the surface. With the surface ice layer blocking access to the spongy firn below, all the pores available in the firn could not be used to store meltwater. Machguth notes that only about 65 percent of the pore spaces were used for meltwater storage, while 35 percent remained vacant. Consequently, the firn is losing its ability to buffer against meltwater runoff.

If warming continues, Machguth expects the near-surface ice layers, which block the storage of meltwater, to spread to higher elevations—this would ultimately lead to more meltwater running off from the ice sheets and entering the ocean.

These findings are published in the journal Nature Climate Change.