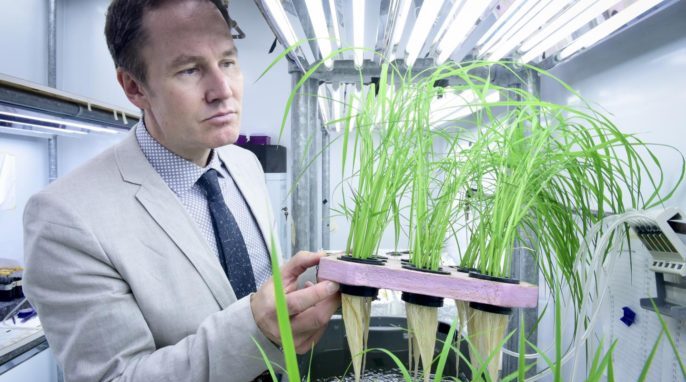 Climate change coupled with our growing population is putting tremendous pressure on world food production, especially in developing countries. We need crops that use resources more efficiently. Scientists from China and Canada have identified “superstar” rice varieties that can reduce pollution and also save money spent by farmers on nitrogen fertilizers.

“Anything we can do to reduce demand for nitrogen, both environmentally and for farmers in the developing world struggling to pay for it, is a significant contribution,” says Herbert Kronzucker,  distinguished professor at the University of Toronto, who carried out the study along with a team of researchers from the Chinese Academy of Sciences.

The Role of Nitrogen

Fertilizers containing nitrogen in the form of ammonia or urea are commonly applied to crops and for rice farmers can account to about 20 percent of the total cost of production. But they are not taken up efficiently by rice crops; up to 70 percent of nitrogen from fertilizers is lost from the soil. Loss of nitrogen occurs through three main routes: surface runoff, leaching into the groundwater, and vaporization as a gas into the atmosphere.

The process of nitrification—the conversion of ammonia to nitrates via nitrites—by nitrifying bacteria in the soil causes the loss of nitrogen, as nitrates are more water soluble and can run off easily, leaching into groundwater and causing water pollution. Excess nitrates in water bodies are responsible for algal blooms and can be toxic to aquatic life. Plant roots can take up nitrogen in the form of ammonium and nitrates dissolved in water. But rice crops have been shown to prefer ammonium over nitrate.

During the conversion to nitrates, some intermediate gases including nitrous oxide, a greenhouse gas, can leak out into the atmosphere. Each molecule of nitrous oxide is 300 times more potent than carbon dioxide in its heat-trapping ability. Kronzucker explains that some scientists believe that the role of nitrous oxide emissions from agriculture such as corn and sugarcane plantations has been underestimated. “We have this bucolic idea of agriculture—animals grazing or vast fields of majestic crops—but the global reality is it’s one of the biggest drivers of environmental pollution and climate change,” says Kronzucker.

Compounds that can inhibit nitrification by bacteria can prolong the retention of fertilizer in the soil and could potentially increase the efficiency of nitrogen use by crops. Synthetic inhibitors of nitrification have been identified, but they are expensive and not readily available. Moreover, some of the inhibitors that are water soluble can also pollute groundwater. So scientists have turned to identifying natural nitrification inhibitors, as some plant roots release substances that can slow down the process, thereby reducing the loss of nitrogen. Kronzucker believes that this “offers a very exciting ‘green’ possibility of reducing the harmful effects of N [nitrogen] loss and environmental impact without the need for genetic modification of organisms (biotechnology) or external chemical input.”

Kronzucker’s team grew 19 varieties of rice (Oryza sativa) consisting of indica, longer grain rice grown mostly in tropical and subtropical parts of South and Southeast Asia as well as in southern China, and japonica, shorter grain rice cultivated mostly in the temperate parts of East Asia. Their goal was to find the potential for producing inhibitors of the bacterium Nitrosomonas europaea, responsible for nitrification, and to find out which varieties are most efficient at nitrogen uptake.

The team found that all rice varieties released some nitrification-inhibiting substances. They identified an alcohol-based compound released by the roots of most varieties that inhibits the enzyme involved in the first step of nitrification. Two varieties in particular had a strong inhibitory effect on nitrifying bacteria.

It turned out the varieties found to have a high inhibitory effect were also more efficient at taking up ammonium, suggesting a close relationship between the two processes. “The most potent nitrification-inhibiting varieties were also the most efficient varieties in terms of acquiring and utilizing soil nitrogen,” explains Kronzucker. And this is why they are referred to as “superstar” varieties by the media.