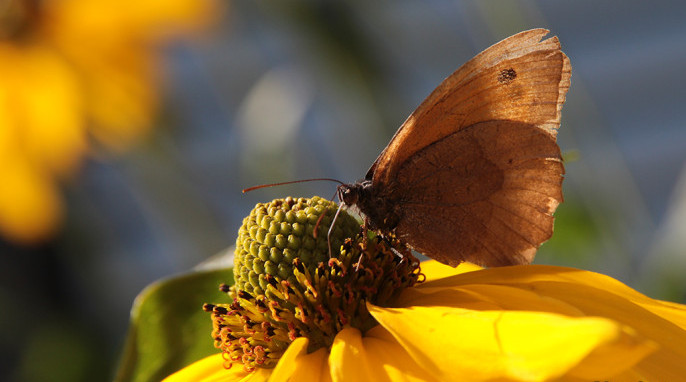 Nature photographer and blogger Steven Spence has good news to share with you about butterflies and biodiversity on the Iberian Peninsula.

returning to the bough, I thought –

But no, a butterfly.

This week we have encouraging data to share with you about butterflies in Europe.

Biodiversity is a major concern in Europe and elsewhere. However, a recently released study of butterflies in Spain and Portugal suggests biodiversity may have been significantly underestimated. The study conducted by the Institut de Biologia Evolutiva (IBE) shows that 28% of butterfly species in the sample may be formerly undiscovered.

A Bright Spot In A Dark Hour

The study used DNA sequencing to document all 228 known butterfly species on the Iberian peninsula. Scientists discovered that 64 butterfly species may be genetically distinct, but so far unidentified due to close resemblance to other species. Having the DNA sequences gives scientists a tool to definitively identify butterflies, even if only parts of the insect are available, such as when they are eaten by a bird, spider or other predator being studied.

A higher genetic diversity is important for several reasons. For scientists it means that they still have significant work to do to understand the butterflies, their habitats, and life cycles. For the butterflies, a more diverse gene pool promises better adaptability to environment, disease, and predation challenges they may face.

Although increased genetic diversity is very positive, butterflies remain under pressure in Europe and elsewhere. As Robert Vila, the leader of the study explains:

“Similarly to bees, there are figures that clearly demonstrate that butterflies are in a critical situation. In the last twenty years, the butterfly population in Europe has been reduced by half. And this taking into account that twenty years ago the butterfly population had already declined compared to previous decades. We are in a race against time to know and protect their diversity.”

Southern Europe, especially the mountainous regions of the Pyrenees, the Alps, and the Balkans, harbor the greatest diversity of butterflies. Many of these butterflies have restricted ranges making them quite vulnerable to loss of habitat. The Iberian peninsula, where the study was conducted, contains over half (53%) of all the butterfly species in Europe, making it especially important in terms of diversity.

Canary In A Coal Mine?

Why are butterflies in decline? Should we be concerned? Butterflies are environmentally sensitive and their lifecycle (as caterpillars and adults) often depends on very specific plants. They are considered excellent indicators of the status of ecosystems. Yes, if butterflies are on the decline there is every reason to be concerned about the ecosystem in question.

Butterflies’ sensitivity to specific plants during their lifecycles means that various changes in the environment affecting those plants will be reflected in butterfly populations.

What Can I Do?

While this article specifically looks at European butterfly populations, the problems described are by no means unique to Europe. Individual efforts can make a difference and certainly reward you with a few more colorful friends dancing on the wind in your neighborhood.

The butterfly is in love with the rose,

Flutters about her a thousand times,

Surrounded by loving rays of sunshine

But who does the rose love?

I would dearly wish to know.

Is it the singing nightingale?

Is it the silent Evening Star?

I know not who the rose loves;

But I love you all:

DNA Sequencing of Butterflies on the Iberian Peninsula