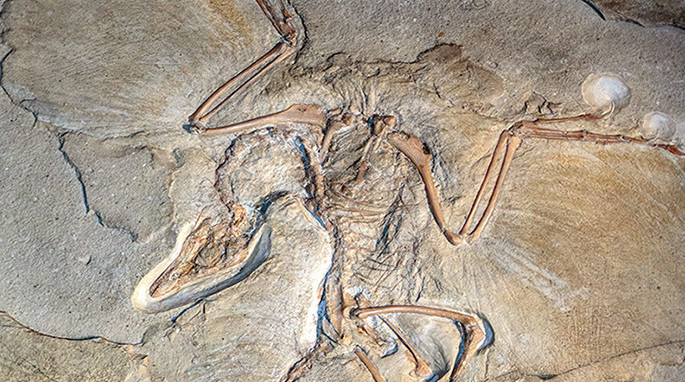 For its sheer beauty, the Berlin specimen of Archaeopteryx has been described as a “paleontological Mona Lisa” by Dr. Luis M. Chiappe of the Natural History Museum in Los Angeles. Without a doubt it is one of the most attractive fossils that I have ever seen. It is striking because it clearly has avian features, yet it is so different from modern birds.

A previous article on the reference specimen of Archaeopteryx (London Natural History Museum) mentioned both the claws and the teeth. The London specimen’s counterslab contains  a piece of the jaw including a few teeth. The Berlin specimen still has the head attached and it is very easy to see the teeth, which are a feature no longer present in modern birds.

Equally impressive are the digits of the hands and especially the claws on the wings. There are a few living birds that have claws on their wings, but these are not the same anatomically or functionally. The most common comparison made is to the hoatzin, which has two claws while it is a fledgling.

The claws on the hoatzin are used as part of a survival mechanism. Hoatzin nest sites are built in trees above water in the Amazon and Orinoco River basins. If the fledgling needs to flee the nest to escape a predator or if it should fall out, it will land safely in water and be able to climb back up the tree. The claws on the wings are helpful in latching onto twigs and branches, so it can get out of the water. As an adult the claws are lost.

The Archaeopteryx had claws on its wings as a fledgling and an adult. The hands and fingers that form the wing structures are very similar to those of maniraptor dinosaurs—a group of bipedal theropods that are closer to birds than other dinosaurs. In fact, the anatomy of Archaeopteryx is so similar to maniraptors that several Archaeopteryx fossils were initially classified as a dinosaur named Compsognathus. Only after a closer examination of the feather impressions were the mistakes rectified.

The feathers that make the Berlin and other specimens so valuable as fossil records are also are a curse. They prevent the extraction of the complete fossil from the matrix it is embedded in because there is no way to physically remove the fossilized bones without destroying the evidence of the feathers. Compare the 1880 photograph of the Berlin specimen with how it looks currently: It is obvious that feathers on the legs were chipped away during preparation of the specimen. Fortunately, modern technology and multiple specimens have given us a very good idea of the dinosaur’s anatomy so that reconstructions are possible.

London, Berlin: How Many More?

We’ve been very lucky with Archaeopteryx. Sometimes scientists only have one specimen of a species to work with because not everything gets fossilized and we don’t find everything that has been fossilized. There are twelve specimens in total. One is missing, thought to be in a private collection, and two others are recent finds still to be formally described. All the specimens, except the Thermopolis, Wyoming example, are in Europe.

While some people are determined to climb all fourteen 8,000-meter mountains, my personal ambition is to view all 12 Archaeopteryx examples! I may need to engage Indiana Jones to find the missing example, but it’s my hope that a collector will place it on the market and a museum will be able to purchase it for scientists to study and the public to view.