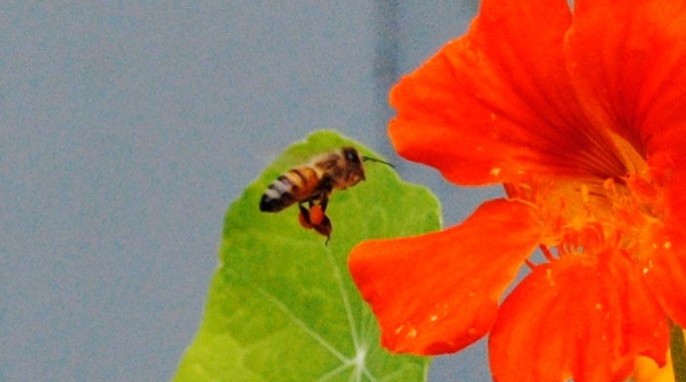 Honey bees are threatened by the parasitic Varroa mite, insecticides, and a host of other factors. Scientists have a possible solution.

Honey bee populations are currently threatened by the parasitic Varroa mite, insecticides, and a host of other factors. But how did the bees get into such a weakened state in the first place? According to a new study, a complex interplay of stresses has affected the insect’s immune system and health, leaving them too weak to fight off parasites and disease. Now, to better protect these crucial insects, researchers are proposing better honey bee nutrition and a reduction of environmental stress factors.

Honey bees live together in close quarters in complex societies and have evolved mechanisms for interacting with pathogens, explained Francesco Nazzi of the University of Udine, and Francesco Pennacchio of the University of Napoli. Some pathogens, such as the deformed wing virus, can cause asymptomatic infections that a healthy bee immune system would keep under control.

“These covert infections are very common all over the world and represent a kind of Damocles’s [sic] sword for honey bee colonies,” Nazzi explains. “When bees are exposed to stress agents, which may adversely affect the immune competence, a sudden health decay can occur due to uncontrolled pathogen proliferation.”

The first records of mysterious deaths of honey bee colonies were reported in the United States in 2006, followed shortly after by similar reports in other countries. Systematic monitoring in Europe and the United States has shown that losses in the range of 20 to 30 percent of all beehives are common. In some places, the losses have been even worse.

The Varroa mite certainly doesn’t help matters. The mite sucks hemolymph (the bee equivalent of blood) from the insects’ bodies, debilitating the bees and facilitating viral transmission. Neurotoxic insecticides, like neonicotinoids, at sublethal doses may also impair the bees’ immune systems, resulting in the decline and death of entire honeybee colonies.

The health of honey bees might be fortified by better management of their obvious stresses– keeping parasites in check, for example–but also by paying more attention to their diet and exposure to chemicals in the environment.

“Beekeepers should pay extreme attention to parasite control, not only by acting directly on them, but also by enhancing the bee competence to face the challenge of environmental stress that may negatively influence immunity and health conditions,” the researchers say.

These research findings are published in the Cell Press journal Trends in Parasitology.