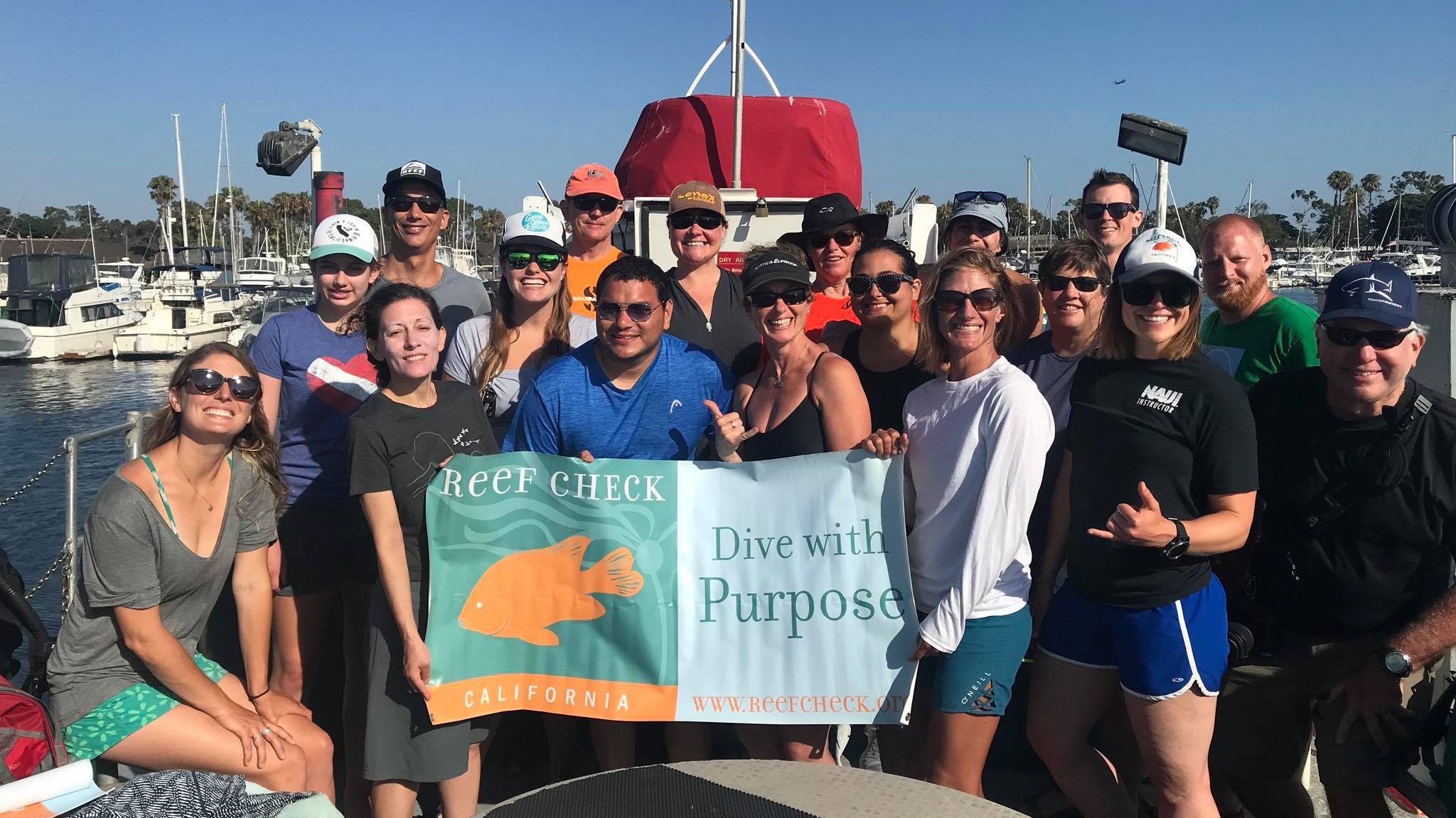 Each year, the Long Beach Scuba Show brings together divers from around the world for seminars and exhibits on all things scuba, with topics ranging from dive gear to scuba vacations. Though the show mostly showcases the business side of diving, visitors can also learn about nonprofits that use diving to fight cancer, promote ocean conservation, and collect citizen science data.

Two of the nonprofits that attended this year’s show in May developed and currently run citizen science projects I wrote about in 2017: Reef Check and Ocean Sanctuaries. Both offer citizen science certification programs and enlist the help of scuba divers in collecting data on marine life.

Reef Check has attended the Scuba Show for many years, but this was the first year Ocean Sanctuaries hosted a booth. Two years ago, Ocean Sanctuaries received the Show’s Eco Laureate Award from Scott Cassell’s Undersea Voyager Project, which is given to individuals and organizations who have made outstanding contributions to ocean conservation.

At this year’s show, the two groups recruited new participants for their programs, spoke to dozens of divers about the importance of citizen science, and also connected with one another over their shared history. It was the Reef Check (RC) training he took a decade ago that inspired Ocean Sanctuaries founder Mike Bear to start his own marine citizen science nonprofit.

“Their booth was right next to ours, and it was nice meeting new faces there and reminiscing about my time with them as an RC student,” Bear said.

Hearing Mike’s story was the highlight of the scuba show for Reef Check Tropical Program Director Dania Trespalacious. It reminded her of the impact that regular people from the community can make when working together.

“The Scuba Show reminds us of the tight-knit connections in the scuba community, even across oceans and continents, and demonstrates the enormous power and potential of the diving community for protecting ocean life,” she said.

I enjoyed the opportunity to reconnect with both groups through interviews this spring to get an update on each of their projects. Some of the news I learned was exciting, some of it was quite sobering, but all of it was possible because of their dedicated citizen science volunteers.

Divers involved with the program submit photos they take of the sharks they encounter while diving, which Ocean Sanctuaries analyzes using a computer program (originally designed to ID star patterns in the sky for NASA) to identify sharks by their freckles and other markings. Advanced divers also help the group collect data at an underwater wreck site in southern California called the Yukon.

Reef Check was founded in 1996. It enlists the help of scuba diving citizen scientists who collect data on coral reefs around the globe, as well as on the rocky reefs and kelp forests off the coast of California, using a rigorous protocol employing transects and underwater slates.

The coral reef project is supported through donations, and Reef Check California receives funding from the State of California to monitor areas inside and outside the state’s Marine Protected Areas (MPAs), which are offshore preserves similar in size and function to state parks.

Each project has produced interesting findings that are being used by both scientists and resources managers.

Volunteers with Ocean Sanctuaries documented a number of shark sightings off the coast of Southern California in 2014 and 2015, but for the past few years, they haven’t documented any.

“We are at a loss to explain this kind of thing,” said co-founder Mike Bear. “There is no shortage of divers in the water on the lookout for this species of shark, but lately we’ve seen nothing.”

Bear is now looking for opportunities to share these findings with professional scientists in the San Diego region.

He has also connected with scientists from the University of Miami. The research of these scientists, off the coast of South Africa, seems to indicate that sevengill shark population numbers in that region are increasing as great white sharks disappear from the bay.

“Citizen science is getting more and more widely accepted by the scientific community,” Bear said.

Recent Reef Check data show that several species are being found outside their normal ranges, suggesting that certain species are expanding their historically southerly ranges northward. These species include the crowned sea urchin, finescale triggerfish, and largemouth blenny.

Reef Check data also show that long stretches of kelp forests, especially in Northern California, have disappeared in the last few years due to warming waters and the die-off of sea stars from sea star wasting disease, Freiwald said.

“Without their sea star predators, purple sea urchin populations in the region have exploded over one hundred-fold and are decimating the kelp forests they feed on,” Freiwald said.

This has so impacted abalone populations (which eat kelp) that the state, using data from Reef Check, decided to close abalone fishing in 2017 along the Mendocino coast.

Reef Check volunteers continue to monitor the area in the hope that these ecosystems might rally, and the organization is even training abalone fishermen to monitor the underwater sites they used to fish.

In more positive news, Reef Check published a study in March in the journal Nature Communications that used 20 years of Reef Check citizen science data from over 80 countries. It concludes the world’s coral reefs are more resistant to hot water now than they were a decade ago.

“That is good news, because it suggests coral are better equipped to deal with global climate change than we might have thought, and that might give us some time to save them,” Freiwald said.

In addition to providing valuable data, both of these nonprofits maintain communities of volunteers who care about conservation.

“Volunteering with Ocean Sanctuaries made me realize how dynamic everything is and how connected it all is,” said volunteer Stefanie Flax. In particular, she has become more aware of the impact of single-use items, especially plastic. “I’m super aware of what I’m buying now because I’ve seen where it ends up,” Flax said.

Rick Allen, who collects data for Reef Check, said the experience has shown him what a difference that ocean conservation oases like California’s MPAs can make for species under threat.

“Right off the bat I could see the difference between the ecosystems inside and outside the protected areas, and suddenly I got it,” he said.

Flax said that in addition to feeling like citizen science gave her a chance to give back to the ocean that gives her so much joy, it has also deepened her dive experience. “Now if I don’t post (data about) what I saw, it almost feels like I am missing out on part of my dive experience,” she said about her work with ocean conservation.

For Allen, the biggest personal benefits (besides contributing to conservation science) are the friendships he has made through Reef Check. “I came for the data, and I stayed for the relationships,” he said.

Kristin is a freelance journalist and Outreach and Communications Director for the San Francisco Bay Bird Observatory. She holds a B.A. degree in Political Science from Whitman College and an M.S. in Mass Communications from San Jose State University. Kristin has worked as an environmental reporter for The Argus newspaper and was a monthly contributor to Bay Area BusinessWoman News. She’s also directed communications and fundraising initiatives for a number of environmental and youth serving organizations, including Earthjustice and Girls Inc. She dedicates her Scuba Series in remembrance of her beloved mother, Marilyn Butler, who passed along to Kristin a deep love for science and nature along with a pair of pink scuba diving fins.