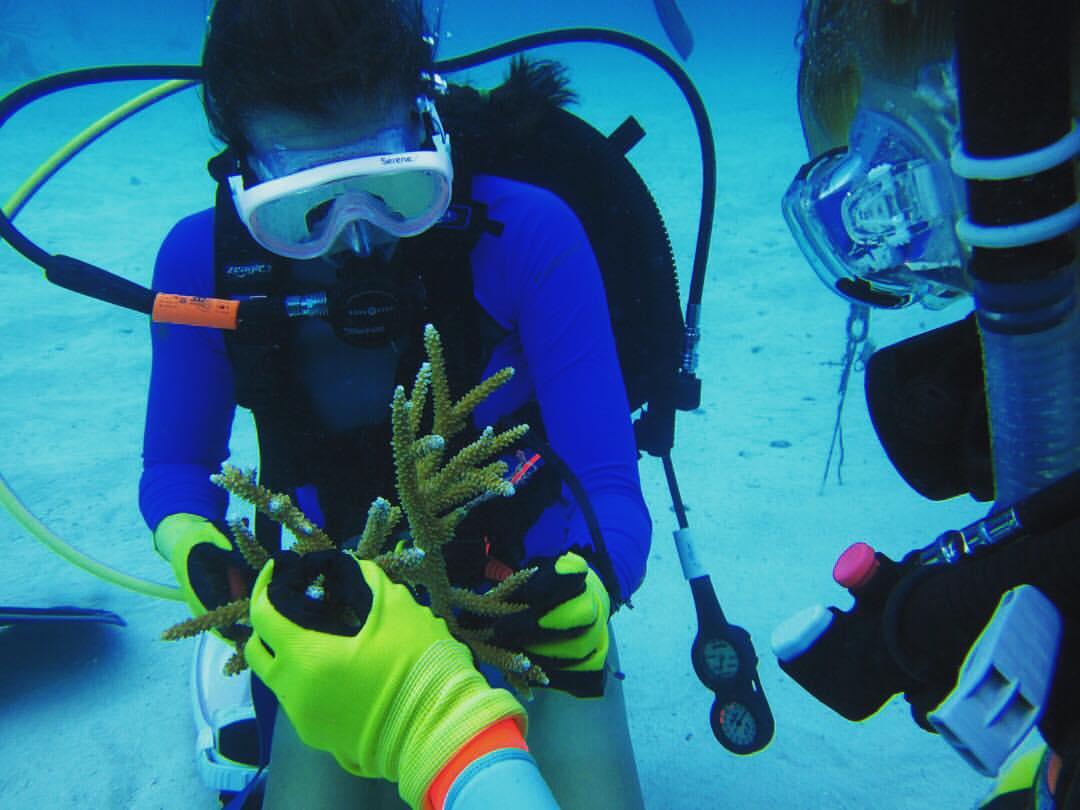 Our oceans are home to most of the world’s biodiversity, and 25 percent of its diversity thrives in coral reefs—that’s about two million species that call the reefs their home. But as reefs suffer the effects of climate change and globalization (several Caribbean reef-building species are now considered endangered), their ecosystems suffer, too. Fish colonies that provide food for coastal communities dry up, and the natural barriers that the reefs create become less effective, leading to more destruction in the wake of tropical storms. And the numerous health benefits that coral can provide to humans, such as secosteroids for cancer and inflammatory disorder treatments, also diminish.

To protect the thriving marine ecosystems that call the reefs their home, not to mention the coastal communities whose economies and safety often depend on the reefs, we have to protect and restore the reefs themselves. Once considered a longshot, researchers and citizen scientists have embraced the challenge of restoring these ocean gardens. Today, organizations around the globe are using aquaculture, or coral farming, to rebuild degraded reefs. But it’s an ongoing challenge.

Marine reefs around the world are being degraded, and coral bleaching is one of the biggest reasons. Bleaching is an event in which environmental stressors, such as extreme temperature changes or rough water, cause coral to dispel algae called zooxanthellae that live in their tissue. Zooxanthellae and coral have a symbiotic relationship: Corals, which are animals, house the zooxanthellae, which undergo photosynthesis while living in the coral tissue. Corals thrive on the oxygen that the algae produce, and they also benefit from photosynthesis byproducts, including glucose and amino acids.

When you see a colorful coral reef, you’re really seeing a coral skeleton housing colorful zooxanthellae. But when a coral is bleached, it expels the zooxanthellae, leaving behind a white skeleton of calcium carbonate, also known as limestone. (Coral polyps are actually soft-bodied organisms that resemble anemones, but if you ever go snorkeling in a reef, you’ll be exploring the limestone skeletons, or calicles, that they created.) Without the zooxanthellae, corals have no source of food, and if they are unable to reabsorb the algae, they will die.

Of course, bleaching isn’t the only threat to our reef ecosystems. Overfishing, boating, tourism, and pollution, along with increasingly common (and often incredibly powerful) coastal storms and new biological factors, have also led to reef decline. But scientists have found a way for endangered reefs to bounce back.

You know how forest service employees use silviculture to ensure that a forest can regenerate, even in the face of logging? Or how a skilled botanist can graft a branch from one tree to another and promote growth—even if the branches are all from different species? Starting in the 1970s, scientists decided to apply similar methods to coral species. Now, one of the most popular methods of repopulating devastated coral colonies is coral aquaculture, a method that involves growing coral nurseries and transplanting either polyps or branches onto existing reefs in the hope that they’ll stick.

Coral farmers often focus on fast-growing branching corals like Acropora cervicornis and Acropora palmata, also known as the staghorn coral and elkhorn coral, respectively. Not only do these coral calcify at a rapid rate, but they have also suffered some of the most intense degradation over the past 20 years, with population declines of up to 95 percent in some areas. However, coral farming has been able to help reefs regenerate more quickly than they would on their own.

Rescue a Reef is a coral restoration project headed by the University of Miami Rosenstiel School. The Florida Keys has the only barrier reef in the United States, and it’s just a short distance away from the university. Consisting of over 50 species of coral and over 100 species of fish, the Florida Keys reef ecosystem is an essential component of Florida’s economy and ecological landscape.

The university opened its first coral nursery in 2007 and established a second in 2009, one near Elliot Key and the other near Biscayne National Park. Two types of nursery structures were built throughout the acquaculture coral gardens: cinder block platforms and PVC-pipe coral trees. To populate the nurseries, staghorn coral fragments no longer than 11 inches long are collected from healthy, wild colonies. (Harvesting fragments doesn’t hurt the parent coral; the branches that are removed can regrow within six months.) Then, the fragments get transported to the nursery and are attached to the platforms or the “trees” with an adhesive and cable ties.

The aquaculture colonies can grow up to 3 meters a year, and healthy colonies might be cut into smaller chunks to create new colonies in different locations. While the corals are growing, researchers collect data on growth rates, branching patterns, and genetic differences between species. They also observe how the coral responds to environmental stimuli.

Once the corals are large enough for outplanting, colonies are collected from the nurseries and transported by boat to the transplant site. Nails are hammered into the reefs and, just like back at the nursery, the colonies are attached with an adhesive and cable ties. The corals should then attach themselves to the reef by growing over the nail and onto the reef substrate; all of this takes about three months. Researchers monitor the restoration site to drive out any coral predators, such as fireworms and corallivorous snails.

Dalton Hesley is a research associate at the Lirman/Benthic Ecology Lab at the UM Rosenstiel School and is involved in the Rescue a Reef program. “This kind of coral reef restoration can have large-scale, positive impacts on our coastlines,” he said, explaining the importance of the lab’s work. “The field of active reef restoration has expanded exponentially to help recover degraded coral populations and the ecological services associated with healthy and complex reefs.”

One of the reasons Rescue a Reef has been successful is the strong community involvement in the acquaculture project. The program trains local volunteer divers in coral gardening, then each volunteer, along with UM Rosenstiel School scientists, goes on expeditions to replenish the degraded reefs. Two dives are made on each expedition: one at the nursery, then one at the plant site.

Hesley and his colleagues conducted a study on the efficacy of the Rescue a Reef outplanting project; they also wanted to compare the success of the grafted corals planted by the scientists and citizen scientists—how many outplants actually attached to the reefs, how fast the outplants were growing, whether they were healthy, and so on. For the study, they conducted surveys of 50 colonies at each of the three different staghorn coral restoration sites that had been planted by both scientists and citizen scientists.

“We already knew there was educational value associated with our restoration efforts. We wanted to show that there was significant ecological value as well,” said Hesley. “Our results highlighted that citizen scientists can be trained to our practitioner-level standards from our short, 30-minute orientation before each expedition, combined with in-water demonstrations.”

For communities like those off the coast of Florida, reefs play a crucial part in regulating the environment. Engaging community members in reef restoration efforts not only makes it easier to teach about the importance of these reefs but also allows the community to take an active role in preserving their own ecosystems. As Hesley noted, citizen scientists are just as capable of this type of restoration as experts are. His research shows that involving the community in restoration efforts can be sustainable and effective.

“The greatest benefit citizen science provides is a stronger relationship between scientists and society through research, education, and engagement,” Hesley told us. “There is growing evidence that projects like Rescue a Reef can achieve participant gains in scientific literacy, improve attitudes toward science and the environment, and increase public awareness and activity in both local and state policy and decision making.”

Citizen scientists concerned about their environments can learn from the Rescue a Reef program. Partnering with an ecologically based citizen science project is a great way to learn about the local ecosystem, contribute to ongoing research, and most importantly, make a substantial difference.

RELATED: Map the World’s Coral Reefs for NASA with NeMO-Net

All images are courtesy of the Rescue a Reef aquaculture program, provided by Dalton Hesley.

Dalton Hesley, University of Miami Rosenstiel School, in conversation with the author, May 2017.