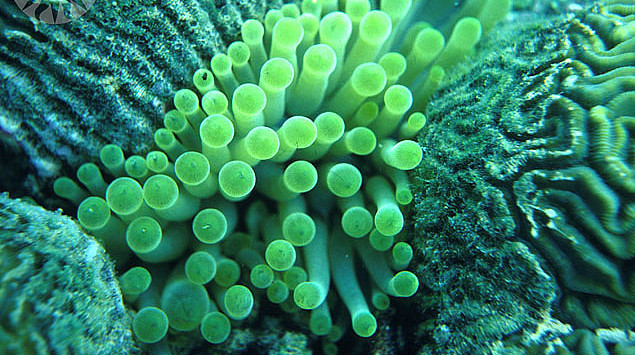 These scientists are building artificial coral that can absorb heavy metal pollution. Find out how it could work to protect the environment.

Coral’s characteristically colorful tentacles, while attracting tourists and SCUBA divers with their unique beauty, are both the animal’s greatest strength and weakness. Although these structures have evolved to efficiently absorb nutrients from the water, they also let in toxic heavy metals like mercury, lead, or cadmium, which industrial manufacturers are pouring into the oceans in increasing quantities.

However, scientists may have found a way to reduce heavy metal concentrations in oceans and prevent coral and other animals (including humans) from absorbing harmful levels of the toxins. Researchers led by Dr. Xianbao Wang at the Anhui Jianzhu University in China have developed a material made of aluminum and oxygen that naturally grows in a shape similar to the complex coral structures. This artificial coral easily absorbs heavy metals in water and its growth process is simple enough to allow for large-scale manufacturing.

Many sea animals absorb heavy metal waste that comes from the treatment of wood and the manufacturing of circuit boards, pigments, and petroleum.  These toxins can be potentially dangerous to most species when concentrations are too high, but corals have a structure that makes them especially susceptible. Though their tentacles may appear to be simple strands waving in the water, zooming in to the microscopic level reveals a complex, two-tiered structure. Larger patterns, microns in diameter (about the width of a human hair), are broken up into folds and wrinkles that are only nanometers wide (the width of a single DNA molecule). Evolution’s endless refinement has created this hierarchical structure that maximizes the coral’s surface area, increasing the number of possible sites to trap nutrients flowing along the ocean currents.

Unfortunately, such an effective mechanism for trapping nutrients also has a habit of catching unwanted elements. Heavy metals are particularly attracted to the chemical groups that occur on a coral’s surface.  Thus, as industries dump more and more heavy metals into the ocean, coral reefs are one of the first ecosystems to suffer, with downstream effects that lead to high concentrations of metals in fish and our food supply.

Since corals absorb toxins so well, Wang and colleagues thought reefs would make an excellent model for an anti-pollution device. But how does one grow inorganic material in a similar structure as coral, which has had millions of years to evolve the perfect multitude of curves to maximize surface area?

Previous attempts to construct artificial coral have used aluminum oxide (Al2O3) or boehmite (AlOOH) particles because they are non-toxic, chemically stable, and absorb heavy metals well.  But both materials have the tendency to clump together once they begin absorbing metals, which reduces their ability to absorb any further amounts of metal. In addition, boehmite naturally occurs in a series of flat, layered structures that do not show the curling behavior of corals necessary to increase surface area.

The question was whether there was a way to prevent these aluminum-based compounds  from aggregating and allow them grow like coral.  Wang and his colleagues have found an answer. By heating boehmite in a solution mixed with an organic molecule called ethylene glycol (EG), the researchers discovered that the mixture transformed into a structure mimicking the two-level micro-structure of coral. As seen in the figure below, the material consists of bunches of folded segments that resemble the flowing curves of flower petals (similar structures that maximize surface area are seen throughout nature – think of all the folds and valleys in the brain). At the atomic level, each of these fold is made of periodic, crystalline aluminum oxide, but the higher-order structure is much more chaotic.

How can the researchers be certain that it is ethylene-glycol that drives such a unique growth process? How might it help reduce heavy metal pollution? To answer this question, the study’s authors grew two samples – one with much lower concentrations of EG than the other to compare the resulting structures. Panel (a) above shows the final material using high EG concentrations, and as expected there are many folds in the structure. However, panels (c) and (d) show the same aluminum oxide material heated to high temperatures without including EG. The difference is quite significant: instead of wrinkles, the structure creates many smooth, hollow tubes, greatly decreasing their surface area.

So why does the simple inclusion of ethylene-glycol lead to this structure? The researchers are not completely certain, but it is likely that EG bonds to the surface of the aluminum oxide through its hydrogen atoms (known as hydrogen bonds). This interaction changes the surface tension of boehmite so that it prefers to curl instead of reside in a smooth, planar structure.

Regardless of the reason, newly made artificial coral absorbed more than twice as much mercury (a common toxin) as the aluminum oxide grown without EG molecules. The growth method is also scalable and could easily be applied in large-scale manufacturing settings.   Since heavy metal waste is becoming a bigger problem as demand from consumer culture grows, such an innovation gives hope that we can reduce ocean toxicity  and better protect Earth’s diverse underwater ecosystems and our food supply.

Photo of living coral courtesy of Public.Resource.Org via Flickr