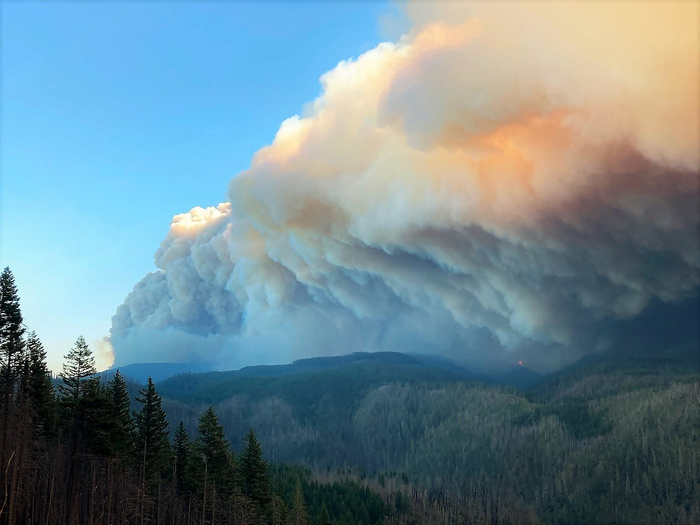 Although the Labor Day wildfires of the Cascade Mountains in 2020 were devastating, they actually fit into the ecosystem’s long-term patterns.

Forests of the westside—the western face of the Cascade Mountains, stretching from Washington’s Olympic Peninsula south through Oregon—are temperate rainforests, wet much of the year and home to old-growth trees. But in late summer of 2020, the forest had been drier than usual up in Washington. Windy, too, with speeds of up to 55 miles per hour on the mountains’ peaks and ridges. Then a wake-up call struck policy makers and the westside’s residents when a large wildfire took hold on September 7.

Within just two weeks, the Labor Day fires ravaged an area almost the size of what had burned over the last five decades combined. Half a million residents were under evacuation warnings, nearly 90,000 were actually evacuated, more than $6 billion in property was lost, and communities were left reeling in the haze of one big question: How did a rainforest receiving up to 137 inches of precipitation per year burn so quickly and so severely?

Westside wildfires are the old normal

Though several theories—mostly based on how wildfires behave in typical dry forests—circulated following the Labor Day fires, USDA Forest Service researchers set out to find a scientific explanation for what caused such a catastrophe, and how to prevent similar losses in the future. To answer these questions, lead author Matthew Reilly and other scientists with the Forest Service examined historical records, existing literature about wildfires, and new data after the blaze.

Their study states that in the northern, coastal, or high-elevation areas of the westside, severe fires occur roughly every 125 years. In the southern areas, where elevation is lower, the climate is drier, and lightning ignition is more likely, mixed-severity fires occur every 35 to 125 years.

Through further analysis, the researchers found that the extreme circumstances of the 2020 Labor Day fires are actually nothing new. In terms of weather conditions and timing, they align closely with wildfires that burned after logging operations in the 1800s. But historical data shows that catastrophic burns in the westside go back even further. Tree ring analysis shows large, drought-driven fires have occurred in southwest Washington since the 1200s. Farther north, in the Olympic Peninsula, wildfires burning more than a million hectares each have cropped up throughout history in the 1100s, 1300s, 1500s, and 1700s.

There are, of course, no first-hand accounts of fires that took place a thousand years ago. But we do have retellings of 20th-century burns, and there is enough evidence to form a pattern: low humidity and strong east winds, which tend to take place in late August through September.

“This watershed event for human communities was entirely consistent with historical behavior for the regional landscape in which many communities are embedded,” the study states. “Like tsunamis and earthquakes, it was inevitable that events like those of 2020 would eventually occur. And like other rare natural disturbances, these kinds of wildfire will occur again, as they are an inherent characteristic of these ecosystems.”

How could we prevent another wildfire?

Protecting the westside is important, not only for the people who live there but for the ecosystem itself. Like many rainforests, it’s a biologically diverse area with old-growth trees that store a lot of carbon, keeping it out of the atmosphere. (That is, until a major fire comes through.) But with such a scientific focus on preventing wildfires in drier areas, there’s little research to help form solid tactics for this region.

Given the rainforest’s ability to churn out a lot of biomass in less time than it would take a typical dry forest, traditional methods of avoiding catastrophic fires, like prescribed burns and fuel removal, are not helpful options and would require too much upkeep. Thinning forests on a large scale is not only impractical and costly, it would also diminish the region’s natural biodiversity and allow invasive species to move in—some of which, like gorse and Scotch broom, might actually invite future wildfires.

“Our study indicates we need very different approaches and adaptation strategies in westside forests compared to those we use in dry forests,” Reilly says.

Given their rarity, these severe fires are hard to forecast and result in significant destruction. So what can residents do? Get ready for a range of events—including the worst-case scenario. While large-scale fuel removal isn’t a viable solution for the westside as a whole, homeowners and business owners can still manage vegetation around their property and bolster structures against fire, especially when conditions become risky.

On a community level, the study suggests planning strategies could be gleaned from municipalities’ approach to “the Big One,” a catastrophic earthquake that’s predicted for the Pacific Coast. Tsunami warnings could also inform public awareness campaigns for catastrophic fires, since these events are inevitable, hard to predict, and potentially devastating.

Managing ignition risk will play a large role, too. The researchers cited a study from 2017 showing that people have sparked many of the westside fires. Since severe fires on the westside are rare, the region may not have the same resources that other areas do once a fire takes hold, making community fortitude and individual responsibility all the more crucial to protecting its future.

This study was published in the peer-reviewed journal Ecosphere.

More about forest management and wildfires

—Mackenzie Myers Fowler is a science writer, avid knitter, and former field station ragamuffin. She holds an MFA in nonfiction writing but would be a soil scientist if she could do it all over again. She lives in Michigan with her husband, her cat, and a plethora of houseplants.