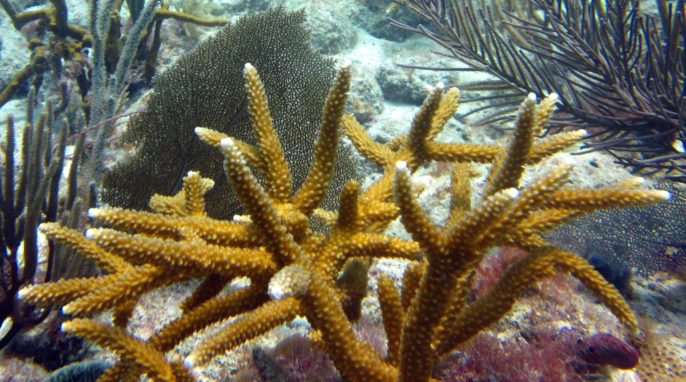 Since the 1980s, Staghorn corals have suffered massive declines (up to 98 percent). How can we restore them? With coral gardening restoration programs.

The study demonstrates that current restoration methods are very effective, that no excess damage is done to donor colonies, and that once outplanted, the corals behave like wild colonies. Stephanie Schopmeyer, a coral biologist at the University of Miami and lead author of the study says that “findings from this study can be used to develop program-specific benchmarks for coral restoration programs throughout the Caribbean and worldwide.”

The decline of Staghorn corals

These fast-growing corals have suffered massive declines of up to 98 percent since the 1980s, due to disease, predation, bleaching, hurricanes, and algae overgrowth, among other factors. First conceptualized in 1982, coral gardening is used to revive staghorn corals in over 70 restoration programs in the Caribbean.

Because these corals support reef growth, fish habitat, and provide coastal protection from rising sea levels, thousands of Acropora corals have been raised in nurseries each year and outplanted to revive degraded reefs. “Healthy coral reefs are essential to our everyday life, and successful coral restoration has been proven as a recovery tool for lost coastal resources,” says Schopmeyer.

Schopmeyer’s team was the first to assess the restoration success of thousands of nursery-reared staghorn corals belonging to more than 120 distinct genotypes in six geographical regions within the first two years of outplanting in reefs in Florida and Puerto Rico. They also analyzed the impact of fragment collection on donor colonies. Apart from measuring restoration success, the team developed benchmarks that can be used by program managers to evaluate the success of their recovery and restoration efforts.

They found that the sites where fragments were collected from donor colonies showed no signs of mortality and average live tissue cover was high (85 percent) on the donor colonies in all regions after one year of tissue collection. Moreover, donor colonies had similar mortality and growth rates when compared with non-donor colonies. Based on these findings, the team suggests that up to 10 percent of the biomass of healthy, large A. cervicornis colonies can be harvested for nursery propagation without negatively impacting donor colonies.

What is coral gardening?

Nursery-reared coral fragments showed high survivorship, indicating that the current methods used to collect and transport the fragments are efficient. Growth rates of fragments in the nurseries were similar to the rates observed in wild colonies. The most encouraging findings were that survivorship and growth of outplanted nursery-grown colonies was similar to that of wild colonies and outplanted corals were observed to spawn at the same time as wild coral colonies.

Using these results, the researchers propose that for the first year of restoration, donor colonies should have over 75 percent of live tissue cover and survivorship of nursery corals and outplanted corals should be higher than 80 and 70 percent, respectively. Productivity (growth in terms of initial colony size) of nursery corals was 4.4 cm per year and 4.8 cm per year for the outplanted corals. These rates can serve as a “baseline measurement for comparison within and between restoration programs.”

If a project falls short of these coral gardening benchmarks, program managers can identify areas where corrective action is needed. For example, the researchers suggest that high mortality among outplanted corals may indicate poor water quality or poor attachment methods. “Expanded benchmarks should be developed for other crucial steps in the restoration process, such as the contribution of outplanted corals to reef structure and coral cover, the number of corals developing and releasing gametes, and the diversity and structure of the fish and invertebrate community supported by restored sites,” adds Schopmeyer.

You can get involved in restoring coral reefs by outplanting nursery-grown corals in depleted reefs. For more information, please visit the UM Rescue-a-Reef program.

Neha is a freelance science writer based in Hong Kong who has a passion for sharing science with everyone. She writes about biology, conservation, and sustainable living. She has worked in a cancer research lab and facilitated science learning among elementary school children through fun, hands-on experiments. Visit her blog Life Science Exploration to read more of her intriguing posts on unusual creatures and our shared habitat. Follow Neha on Twitter @lifesciexplore.