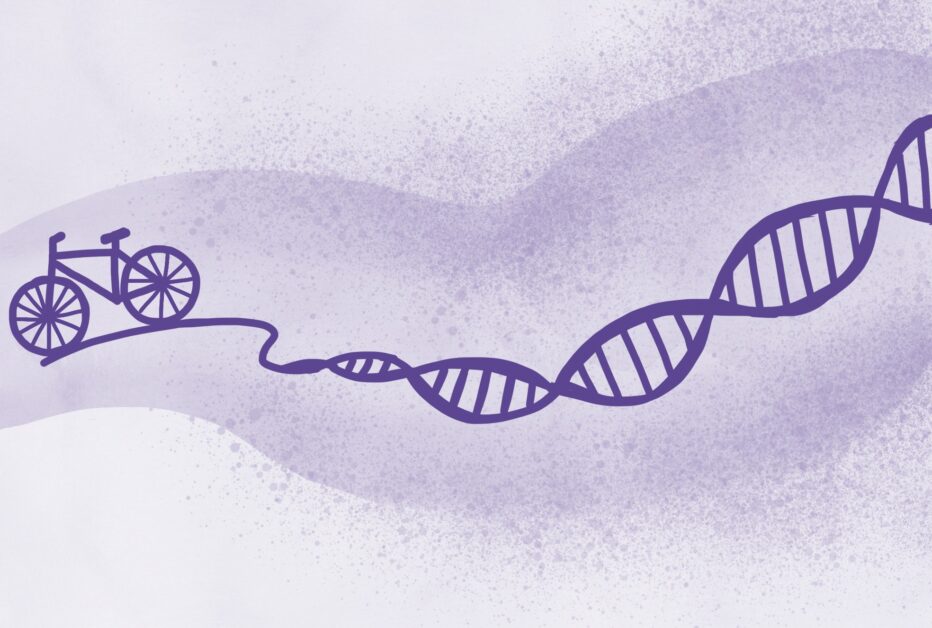 Genes can be expressed in different ways, and new research suggests that exercise has a positive impact on gene expression and your health.

By Risha Banerjee and Angie Lo

It’s a well-known fact that regular exercise improves your health and prevents the onset of complications such as cardiovascular disease and neurological conditions. Now, researchers have discovered that your genes may play an interlinking role in this process. They found that exercise modifies gene expression by enhancing the activity of health-related genes.

How your genes make you

Genes contain instructions for the production of proteins, which are large, complex molecules that perform many different functions in our bodies. In a process known as transcription, DNA is used as a template to create RNA. This process is run by special proteins that comprise the body’s transcription machinery. RNA is then used by other enzymes to produce proteins. The hierarchical conversion of DNA to RNA and then to proteins is called the “central dogma,” and the corresponding process is known as gene expression. The proteins created are responsible for all of the characteristics we display, and they contribute to our state of health.

Although one might think that genes—and the proteins that result from them—are fully determined before birth, this is actually not the case. While the DNA sequences in our genes will always stay the same, the way that they are processed by transcription machinery, and thus their expression, can change. These changes are influenced by our environment.

The study of these changes is called epigenetics. Many factors can be responsible for epigenetic changes, including how old we are, what we eat—and how much physical activity we undertake. These changes alter transcription by adding a methyl group, acetyl group, or a phosphate group to a specific DNA location, changing how it interacts with the transcription machinery. Additionally, these chemical groups can also be added to proteins called histones. Some of your DNA is wrapped around histones for more efficient storage. When histones are modified, this can affect whether a specific DNA portion is wrapped around them or not. The portions of the gene that are exposed are the portions that get expressed. Meanwhile, those that are wrapped can’t be accessed by the proteins that transcribe the sequences. Consequently, these genes are turned “off,” or silenced. Histone modifications can also affect how other components besides transcription machinery interact with DNA.

Epigenetic changes are usually reversible. Researchers have used different enzymes to add and remove methyl groups from DNA sequences of silenced genes, causing the genes to turn off and on, much like an electric switch.

Although it is known that exercise has epigenetic effects, researchers at the University of Copenhagen wanted to determine exactly how these changes take place, and how they might relate to health and disease. In their study, they exposed participants to a six-week endurance training program, where they underwent five hours of intensive exercise per week. Before and after the program, researchers took a small sample of muscle tissue from each participant, which they used to study their gene expression.

The researchers then used special software to determine which sections of the DNA had changes in their surrounding histone proteins. They found that compared to pre-exercise, participants’ muscle DNA post-exercise had histone changes in specific DNA regions called enhancers.

When an enhancer is able to do this work, it is termed as “active.” Several factors contribute to what makes an enhancer active, including epigenetic modifications to surrounding histones. When acetyl or methyl groups are added to the histone proteins in a certain way, they are associated with active enhancers. Notably, these were the types of changes found by the researchers of Copenhagen University.

In participants’ muscle post-exercise, the new active enhancers were associated with genes related to cardiovascular processes, renal function, and cognitive performance. It is thought that these genes cause the muscle to release certain compounds into the bloodstream, which in turn help send signals to other organs in the body. The researchers proposed that these epigenetic changes are a mechanism through which exercise improves brain and kidney function, as well as decreases the risk of cardiovascular disease.

More about your genes: Friends at First Sight? Genetics May Decide

More about your muscles: Using a protein to reverse skeletal muscle aging

This study has allowed for better understanding—and appreciation—of the ways through which exercising can improve numerous areas of health. Additionally, it has shone light on how muscle plays a role in regulating other organs, further emphasizing the muscle’s importance and the connectedness of our bodily systems. This study was very much a preliminary one—it was done on a small sample size of eight young males. Additional research would need to be done in order to determine whether these epigenetic mechanisms apply to the wider population, as well as to different groups of people—and, if the mechanisms differ, how exactly they do. This initial study has opened the door to a new area of research in exercise and epigenetics. Hopefully, further studies in this field will help us achieve a greater, broader understanding of how the two work together to promote our health.

This article was published in the peer-reviewed journal Molecular Metabolism.

—Risha Banerjee is an undergraduate student at the University of British Columbia in Vancouver, majoring in biochemistry. She owns two ukuleles and a guitar and can often be found staring at walls, journal in hand. An avid procrastinator, she could probably be the president of the “I’ll do it tomorrow” club. Find her on Instagram @risha_banerjee.

—Angie Lo is an undergraduate student at the University of Toronto, currently majoring in Physiology and English. When not writing or studying, she can be found drawing cartoons, reading poetry, or cracking her tenth corny science pun of the day.