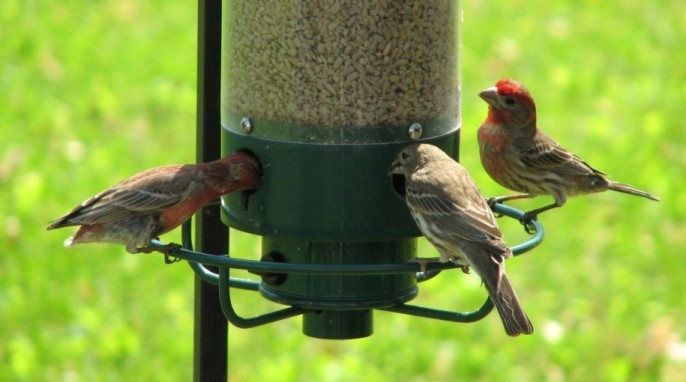 If you enjoy turkey this Thanksgiving, take a moment to think not about the bird on your plate but rather the birds outside your home. With increasing urbanization taking away more natural habitat, local wildlife is having difficulty finding food. Bird feeders have become a popular way for homeowners to help local wildlife and contribute to conservation efforts. But are these feeders, borne of good intentions, actually helping or hurting wild birds? A recent study has enlisted the help of Canadian citizens to find out.

Feeding the Birds, Helping or Hurting?

Conventional environmental wisdom says that feeders in suburban or urban yards help wild birds find food and improve their reproductive success. Recent research has even recommended expanding bird feeder use from just the winter months, when finding food is especially tough, to year-round to help sustain these wild populations.

Feeders may seem helpful, but their benefits have never been scientifically tested against their list of potential dangers. Bird feeders attract predators, create a concentrated wildlife population that enhances the spread of disease, and bring birds dangerously close to collisions with our glass windows. With almost 50% of US households feeding birds, understanding this balance of benefits and dangers is necessary to protect ecosystems that are increasingly integrated with our neighborhoods.

Window Collisions and You

Understanding how all these potential dangers affect bird populations is a complex task, so researchers in Alberta, Canada focused on just one: how do bird feeders impact the frequency of bird-window collisions? The experience is common in suburbia–you are sitting peacefully in your living room when you hear a loud bang. A dazed bird lies unconscious in the grass below. Such bird-window collisions are an unfortunate consequence of our encroachment into wild bird habitats, only inconvenient for us but potentially life-threatening for the birds.

Scientists like to control all of the factors in their experiments to understand cause and effect. However, bird feeders in widely varying backyards prevent such tight experimental control. To study bird feeders, the study authors called on Canadian citizens to track the number of bird collisions occurring at one window in their home during one year. Observations were taken in 43 homes in Edmonton, Alberta. In the first month, the bird feeder was either present or absent and then removed or added in the second month to provide some amount of experimental control for each house. These two-month trials were repeated several times for each house over the course of the year.

Homeowners recorded signs of bird collisions each day and reported the overall number to the researchers after each trial. Known as citizen science, this productive collaboration between scientists and interested citizens has taken off across many disciplines, including neuroscience, ecology, and animal behavior, and provides a unique way for researchers to explore data that they otherwise could not access. At the end of all the trials, researchers could compare the frequency of collisions when a bird feeder was present or absent to determine their role in causing these dangerous events.

The study found that bird feeders do influence the rate of collisions, but are probably not the only factor. The presence of feeders increased collision frequencies 1.84 times compared to windows without feeders (94 collisions with feeders, 51 collisions without). This difference between experimental conditions was not statistically significant when considering all bird species, but became significant when only species using the feeder were considered (mostly chickadees, sparrows, and woodpeckers). This means feeders have the greatest chance of harming those birds who enjoy the nutritional benefits of the feeder.

Other environmental factors are equally important. Besides the presence or absence of a feeder, the time of year was the most important variable affecting collision rates. Collisions increased dramatically during spring and fall when birds migrated through Alberta. In contrast, collision rates declined in winter when most birds had gone, and in summer when the birds were breeding. Fewer collisions also occurred when the feeder was positioned closer to the window, likely because birds were flying more slowly to prepare for landing.

Based on these results, bird feeders can have detrimental effects but likely interact with many other environmental factors, such as the migratory season.

If you want to enjoy the sight of birds in your backyard, you may want to remove feeders during migratory months and bring feeders closer to windows to reduce the chance of bird injuries or fatalities.

This study is a great example of how citizens can help scientists understand more about our impact on the natural world. In general, citizen science is a great way for non-scientists to help environmental or other causes they care about. So, this Thanksgiving, perhaps take a moment to be grateful for the biodiversity around your home. Then consider translating that gratitude into action by getting involved with a citizen project in your area. Below are a few highlighted projects for you to consider joining.

Kummer, J.A. and Bayne, E.M. “Bird feeders and their effects on bird-window collisions at residential houses.” Avian Conservation and Ecology, 10(2):6, 2015.

Robb, G.N. et al. “Food for though: supplementary feeding as a driver of ecological change in avian populations.” Frontiers in Ecology and the Environment, 6, 476-484, 2008.