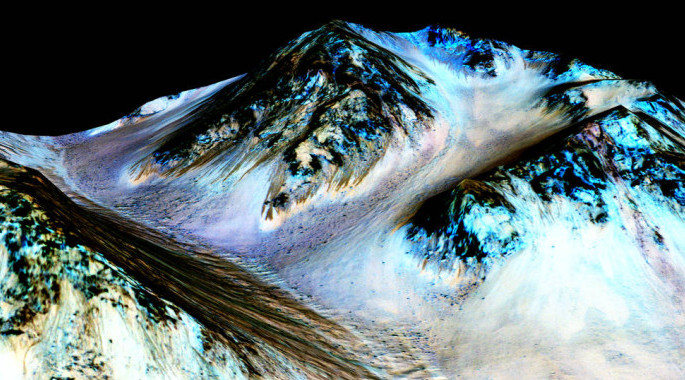 Our partners at ResearchGate recently spoke with Alfonso Davila from SETI, the Search for Extraterrestrial Intelligence Institute, about what draws us to explore the red planet and beyond. Interested in Mars? Don’t miss this other article about the Martian atmosphere.

ResearchGate: What motivates you to explore living conditions – and possible life – on Mars?

Davila: The motivation is twofold. On the one hand there is this nagging drive to understand life at the most fundamental levels (the “what is life?” question), and on the other hand there is this obsessive curiosity about the possibility of life elsewhere (the “are we alone?” question). Now, I think that the best way, and perhaps the only way, to truly understand the intricacies of this phenomenon we call life is by finding another example of it; one that we can compare to ourselves and that can help us separate those aspects of life that are idiosyncratic, and pertain only to the conditions on our planet, from those that are more universal, and therefore fundamental.

Mars plays a central role in this scheme because it is the closest place…where we know life could have started and evolved. Some think there might still be living organisms there, perhaps deep in the subsurface. In any case, the search for evidence of life on Mars is a necessary preamble towards a deeper understanding of life as a universal phenomenon. And as we strive to find the best possible way to search for evidence of life on Mars, we force ourselves to understand life on Earth better.

RG: Why does NASA “follow the water” in its search for extraterrestrial life?

Davila: As far as we know water is the quintessential requirement for life. No water, no life. This is not only based on empirical evidence, but there are some good physical and chemical arguments why water and life make such a good marriage. So we can knock down a couple of places based on this principle alone, and focus our attention (and money) on more likely candidates. No one is to say that there aren’t forms of life out there independent of water. But searching for them armed only with the laws of probability is not very efficient.

RG: Can you tell us about perchlorates and why they seem to be key for life and living on Mars?

Davila: Few people in the planetary science community knew what perchlorate was 10 years ago; certainly very few within the Mars community. Then, the Phoenix lander dropped that scientific bombshell that soils in Mars have up to 1% perchlorate. This was probably the first true alien thing about Mars. Until then, Mars was an ambiguous planet, different and yet familiar. Colder and dryer than any place on Earth, but with mountains, and volcanoes, and fluvial channels. It’s so familiar that places on Earth are considered analogous to Mars, like Antarctica. But 1% perchlorate is very unlike the Earth. On our planet, perchlorate is a natural compound that forms in the stratosphere and rains down on us continuously, albeit in very tiny amounts. It is so soluble that most of it gets washed out into the ocean, or lakes, or water in the ground. It only accumulates to relatively larger amounts in very dry deserts, and even there, typical concentrations of perchlorate are 100 time less than on Mars. So why is there so much perchlorate on Mars? Whatever the reason, it will probably tell us something quite fundamental about Mars, its climate, its hydrological cycle, its atmosphere… I am not sure perchlorate on Mars is directly linked to habitability or life. Certainly perchlorate plays a role in biology on Earth (some microbes use it as an electron acceptor), but it is a relatively minor player in the greater game. Water, nutrients and energy sources are the holy trinity in habitability equations, and perchlorate is a supplement to those. So I don’t think we should react to Martian perchlorate in any excessive way, but add it to the large number of Martian X files, and keep investigating.

RG: Perchlorates also served as an indicator for water on Mars in a recent study in Nature Geoscience that made the news worldwide. Can you explain how so, and how these results relate to your earlier findings?

Davila: Perchlorate salts usually appear in a hydrated form. This means that each salt molecule carries one or more water molecules with it. Those water molecules are encased in the crystalline structure of the salt, and referred to as water of hydration. This is not free water or liquid water, or icy water. The discovery that some features on Mars, called RSL (short for “Recurrent Slope Lineae”) contain certain amounts of perchlorate, suggests that water might be somehow involved in their formation. This is as far as the Nature Geoscience paper went. The original story somehow ballooned into running water on Mars, something that happens often in this business, but this is far from being an actual observation or an established fact.

RG: In your trending paper on ResearchGate you describe that perchlorates could be both a chemical hazard and an important resource for humans on Mars, how so?

Davila: Perchlorate could be significant when it comes to human exploration because it has known effects on human health when ingested in large amounts. Recommended levels of perchlorate in drinking water are millions of times lower than the 1% we find in Martian soil. Perchlorate is a health concern because it can impair proper functioning of the thyroid gland, and affect hormonal output. So it is a problem staring at future astronauts that cannot be ignored. However it is not a showstopper. We know how it is there, and we know how to handle it. And in fact, we know how to turn that problem into an opportunity, because perchlorate can be used to generate oxygen. So this is one of those rare occasions when nature throws a curveball, but also the instructions on how to hit it.

Have perchlorates been found on other planets? And if so, are they as important there as on Mars?

Davila: We recently published a paper showing that tiny amounts of perchlorate (and chlorate) can be found in lunar regolith collected during the Apollo missions, and in pieces of two meteorites. The amounts we found are nowhere near the amounts found on Mars, but their presence is telling us that perchlorate is fairly widespread in the solar system. It can form through pathways that do not operate on Earth and multiple natural sources of perchlorate exist. Understanding those sources is important if we want to understand the origin of perchlorate on Mars, which cannot be fully explained based on what we know about perchlorate on Earth. We don’t have much information on the surface composition of the other planets, so we do not know if perchlorates form or accumulate there, but the presence of perchlorate in meteorites suggests that it might be delivered in tiny amounts all the time.

RG: What questions do we have to answer before we send humans to Mars?

Davila: Scientifically speaking, only one: are there forms of life at or near the landing site that could interact with humans on the planet? By interacting I don’t mean having a conversation during tea, but being hazardous to one another. If that is the case, if we found that forms of life are present at the landing site, or conspicuous near the surface of the planet, for example as part of the atmospheric dust, this could be a showstopper. Once native forms of life can be ruled out (to the extent that they can be ruled out), then other questions need to be addressed, such as how much, how long, and why?

RG: What do you feel when you think of sending humans to Mars in your lifetime?

Davila: To me this would be an indication that humanity is on a greater path to somewhere. A symptom of social evolution. A statement that we are not only looking inward, but we are also not afraid of looking upward and far. That we begin to see ourselves not only as creatures of the Earth, with earthly problems and Earth-bound aspirations, but also as something bigger, grander, and more lofty. I think of billions of years of evolution paving the way for a form of life that can finally break the shackles that bind us to this rock. That we choose to continue climbing mount improbable, but this time we are taking the reins, and we are looking ahead and beyond in a way that defines who we want to be as a species, and what we choose to leave behind as legacy… you know, nothing too epic.