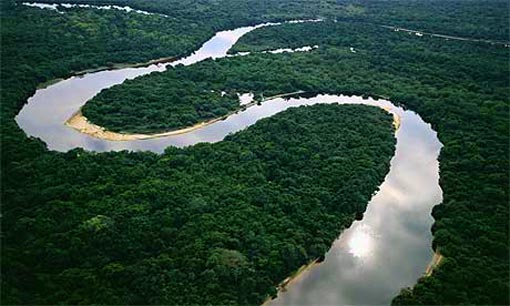 Scientists may not be known as the most courageous folk. They deserve such recognition, given their history of challenging established doctrine, venturing into the Arctic to spy glacial melting, and even sticking a needle in their eyes to better understand optics (thanks Mr. Newton!). Now, a team of researchers, construction workers, and engineers join this cadre of brave scientific brethren, navigating the malaria-carrying mosquitoes, blood-sucking leeches, and poisonous frogs deep within the Amazon rainforest to gain a clearer picture of how climate change and deforestation are affecting the largest forest on the planet.

This isn’t just a one-time expedition, either. Since 2009, a collaboration between Brazil and the Max Planck Institute in Germany has culminated in the construction of a 325-meter monolith – about a meter taller than the Eiffel Tower – that will provide measurements of carbon dioxide, methane, and other climatic variables high in the atmosphere.1 Painted a bright orange that breaks the monotony of the green sea of trees below its peak, the tower will provide a bevy of data about how the rainforest interacts with the atmosphere and how climate change and deforestation affects this relationship.

The Powerful, Yet Vulnerable Forest

The Amazon plays a crucial role in guiding global climate patterns due to its size; it affects the trade winds, the carbon and water cycles, and weather patterns in southern South America.2 The pure size of the Amazon, covering 7 million square kilometers and nine countries, also makes it an important carbon sink to mitigate the effects of fossil fuel emissions. Beyond this type of climate control, the Amazon rainforest also accounts for 20 percent of all oxygen produced on the planet and houses the greatest biodiversity on the planet.

But climate change and deforestation could drastically change the nature of the Amazon and how it affects weather patterns. Rampant deforestation to support the soybean industry, illegal land grabs, and the construction of underlying infrastructure has already depleted 20 percent of the rainforest in four decades, with an additional 20 percent expected over the next 20 years.3 The rainforest produces most of its own rainfall from evapotranspiration, so scientists believe continued destruction may push it past an unknown tipping point which would prevent the forest from producing enough moisture to sustain itself. Combined with global warming, this could transform the Amazon from a lush, verdant rainforest to something resembling a crusty savannah susceptible to droughts. The hint of such a future already arose in 2005 when droughts reduced river levels by 12 meters.3 And each year, as more trees fall to lumbering, the world’s greatest carbon sink can do less and less to soak up our carbon dioxide emissions and may eventually become a net source of carbon, if it hasn’t already.

All of these future predictions are dire, and scientists need more data to understand how close we are to these scenarios, as well as how we can prevent them. For example, the scientific community doesn’t know precisely how much carbon the Amazon absorbs from the atmosphere or if it is close to becoming a net carbon emitter as trees disappear. Also, as researchers better understand the details of the Amazonian ecosystem, they can improve climate models to predict how changes to the forest will affect global weather patterns.

Tower of Knowledge in the Amazon

Enter the massive orange tower, known as the Amazon Tall Tower Observatory (ATTO). The ATTO site is 150 km northeast of the city of Manaus in a pristine region of forest far from any of the destructive lumbering or farming. Reaching the site involves a drive dirt roads deep into the rainforest followed by a 61 km motor boat ride to reach the only dock accessing the tower.4 The tower’s incredible height is necessary to measure atmospheric variables consistently above the turbulent, churning winds that are typical closer to the ground.

Aiming to begin data collection in July of this year, the beacon is armed with measurement tools to assess a host of meteorological and climatic variables: aerosol concentrations (small particulates that can affect light scattering and pollution), trace greenhouse gases (carbon dioxide and methane), radiation levels, rainfall, humidity, atmospheric pressure, wind speed and direction, and even ground level variables like soil moisture or temperature. The sheer number of measurements indicates the potential for unprecedented understanding of the Amazon’s interaction with the atmosphere and its evolution with climate change.

The main research goals for ATTO are to track how these variables change over time so we can include more fine-tuned relationships in climate models and understand whether the Amazon is a net carbon absorber. In the meantime, scientists have already found a few surprises in the initial baseline data they’ve gathered. In particular, tower measurements have suggested that there are sources of methane located in the forest, a possible indication that the Amazon emits more greenhouse gases than previously thought.4

Only more time and investigation will reveal other hidden traits of the Amazon that have not been within scientific reach before ATTO. Such towers do have precedent: the Zotino Tall Tower Observatory (ZOTTO)5 in Siberia has already indicated that the boreal forests of Russia do not absorb as much carbon as we thought, and another 450-meter tower in northern Wisconsin monitors carbon fluxes in the atmosphere.6 But never before have we had such close access to one of the most dominant, far-influencing ecosystems on the planet. The project is both another reminder of the wonders of cross-country collaborations in science , as well as a tremendous opportunity for collecting quantitative evidence to determine whether our collective actions – consumer demand and unregulated economic expansion – are degrading the most important ecosystem on the planet. Such evidence will undoubtedly bolster support for environmental policies that can more adequately protect this unique habitat.

This article was originally published by Nature Education. Photo of the Amazon rainforest courtesy of Lou Gold via Flikr.