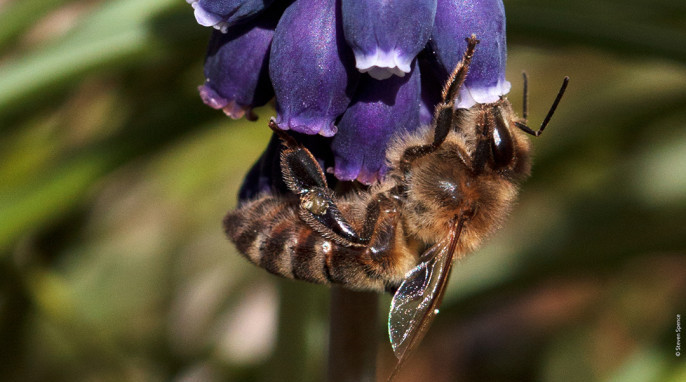 Are we headed toward a future with no bees? Declining Bee Populations Revisited covers what we know about bee hive collapse and recovery.

Given mounting evidence of rapidly declining bee populations, what would be the impact if there were no more bees? As we have seen, there are many other pollinators, including bats and birds. Would these other pollinators be able to take over the job that bees do so well?

Imagine A World Without Bees

To a limited extent wind pollination (inefficient in most flowers) and other pollinators can compensate for a lack of bees. In other cases, bees are essential. For example, the commercial growth of almonds is almost entirely dependent upon honey bees for pollination. Other crops such as blueberries and cherries are are thought to rely on honey bees for up to 90% of their pollination. Certainly, pollination by bees of all kinds contributes to both the quantity and quality of many fruits and berries and would be difficult, if not impossible, to replace.

Beyond the impact on growing food for human consumption, a world without bees would also have a profound impact on other animals’ diets. Clover is one example of a plant primarily pollinated by bees that would be a major loss for livestock. It is estimated that bees pollinate one sixth of all flowering plants and contribute to the pollination of 400 agricultural plants.

Why Are Bee Populations in Decline?

There are multiple factors causing the declining bee populations, both domestic and wild.

Varroa mites have had a significant impact on declining bee populations. These mites are parasites of oriental honey bees (Apis cerana). While the oriental honeybees have developed some resistance to the mites, the European honeybee (Apis mellifera) and many wild bees have no such defense. In the past decades the varroa mite has spread globally and is considered a major factor in stress on bee hives. Research has demonstrated it to be the main factor in bee colony collapse in Ontario, Canada, and in Hawaii, USA.

While honey bees are excellent pollinators, studies have shown that many crops benefit from additional wild bees and other pollinators. The almond groves of California are a massive monoculture crop and, according to the California Almond Board, 1.6 million colonies of honeybees are required to pollinate the trees — that’s 60% of the U.S. transportable honeybee population.  In February of each year, beehives are trucked in for the pollination season and temporarily placed in the orchards. However, during the rest of the year, there is nothing for wild bees to eat.

The Nosema ceranae parasite primarily affects the oriental honeybee, but has been implicated in colony collapse of European honeybees. It also affects bumblebees. When bees eat pollen that is contaminated with fungicides, they may be three times more likely to be infected by Nosema ceranae than bees that consume uncontaminated pollen.

Neonicotioid pesticides may endanger bees most of all, according to two studies of declining bee populations.

One study in Sweden demonstrated that bumblebees and wild bees foraging in crops treated with these pesticides were less likely to reproduce than bees that visit untreated crops. Additionally, there were fewer bees in areas where the crops were treated with pesticides.

In a second study, UK and Irish researchers demonstrated that honey bees and bumblebees prefer sugar solutions containing neonicotinoid pesticides over plain sugar solutions even though the bees ate less and were more likely to die. Scientists suggest the chemicals affect the bees’ reward centers in much the same way that nicotine affects humans. The feeling of reward from the sugar solution containing neonicotinoids causes the bees to prefer the pesticide-laced solution that harms them.

Regulations are being put in place to stop the use of pesticides. The European Union has a moratorium in place on the use of neonicotinoids on certain crops. In Ontario, Canada regulations have been proposed to reduce the acreage planted with neonicotinoid treated seeds by 80% by 2017, and the U.S. Environmental Protection Agency (EPA) has indicated it will not approve new neonicotinoid pesticide uses.

Crop diversity could also help restore wild bee colonies and improve crop yields. Planting other types of flowers in hedgerows where there are large areas of monoculture, such as almond groves, could provide bees with food year round. Farmlands with smaller fields and various crops blossoming at different times would also help wild bees find a healthy meal. Let’s hope  it’s not too late to #savethebees!