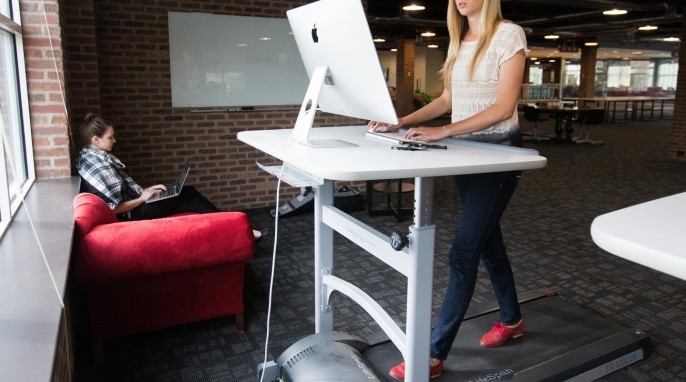 The adverse effects of sedentary office work have given adjustable desks, standing desks, and treadmill desks new attention, but treadmill desks are not everyone’s cup of tea. Now, the latest research from Brigham Young University reveals the impact that treadmill desks can have on job performance.

So You Want a Treadmill Desk

If you are interested in using a treadmill desk at the office, your greatest challenge may be convincing your boss that it will not have a negative impact on your job performance. Some employers worry that standing or walking while working will distract employees and reduce productivity. Now, two BYU researchers have addressed those fears. It turns out that people on treadmill desks perform cognitive tasks about as well as those at sitting desks, despite the fact that they’re walking while trying to concentrate on work.

Exercise science professor James LeCheminant and neuroscientist Michael Larson decided to put treadmill desks to the test and measure the results. The duo compared the cognitive performance of healthy adults sitting at a desk to those using treadmill desks while carrying out the same tasks.

While they found the walkers showed slight decreases in processing speed, attention, and typing words per minute–tasks that require fine-motor skills or heavy concentration–the overall drop was not enough to noticeably harm employee performance.

“Though statistically significant, we are not talking about major differences between the treadmill walking and sitting conditions,” LeCheminant explains. “Rather, these are very modest differences.”

In other words, the health benefits of a walking desk shown by previous research appear to outweigh the slight drop in productivity that comes with such a setup.

LeCheminant and Larson strongly support the use of treadmill desks, sit-stand desks, and any other efforts to safely bring physical activity into the workplace.

How to Justify Your Request for a Treadmill Desk

With that in mind, here’s a quick list of research-based things treadmill desk hopefuls can tell the boss, according to LeCheminant and Larson:

“For health alone it’s great, but if the cognitive decline is small, then you bet it’s worth it,” Larson says. “The health benefits likely outweigh any slight performance dips you may get from implementing the treadmill desk.”

Studying Treadmill Desk Impact: How the Research Was Done

For the study, the duo and their BYU student team assessed 75 healthy adults (half using treadmill desks, half using regular desks) for a 45-minute period. The 37 people on treadmill desks walked at a speed of 1.5 mph. Walkers saw a 9 percent drop in cognitive processing speed, attention, and working memory and a 13-word-per-minute drop in typing speed.

The findings of this study suggest that using treadmill desks may be most appropriate during tasks that are less cognitively demanding (such as checking email) or do not require a great deal of fine-motor skills (non-typing tasks).

Larson suggests that if you want to use a treadmill desk, simply step off when you have a task that requires high concentration, such as intense reading, composing, or editing. That said, the research duo was surprised to find that treadmill desk walkers retained new information just as well as sitters, even if it took them longer to process it in the first place.

“They’re not going to get it as fast, but they’re going to get it,” Larson says. “While walkers don’t learn as fast as the sitters, they were able to retain the information as well later on.”

The researchers say there is room for much more exploration on the subject of standing desks and treadmill desks. In the meantime, Larson is planning on getting a treadmill desk himself as a result of his research. This study is published in the journal PLOS One.