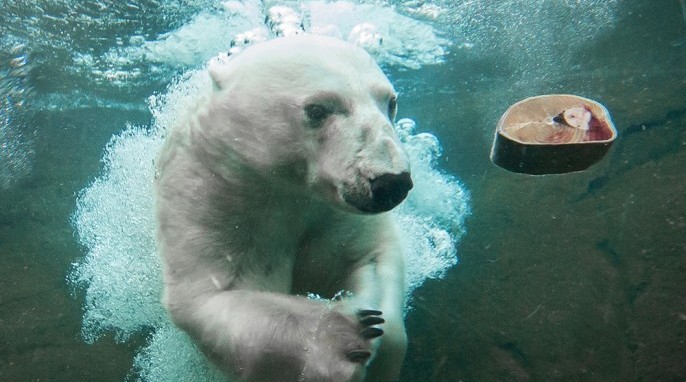 Something is happening to the polar bears. As the arctic ice melts, these bears must look for food on land, and there isn’t enough to go around.

The polar bear is a fearsome hunter and, when it’s time to eat, there’s nothing it finds more satisfying than a hearty meal of ringed seal. But as the arctic sea ice melts, polar bears have fewer opportunities to hunt their traditional, lipid-rich prey.

Among other animals, climate change has been impacting our shellfish supply, California’s pika population, and the lemurs of Madagascar. Now, a team of scientists led by the U.S. Geological Survey (USGS) found that polar bears, forced onto land by the loss of sea ice, are adding berries, birds, and eggs to their diets.

Climate change has been tough on the bears. “In the regions where terrestrial feeding by polar bears has been documented, polar bear body condition and survival rates have declined,” explains Karyn Rode, a scientist with the USGS.

However, there isn’t a lot of land-based food to be found in the Arctic. The scientists found that as the polar bears are forced off of the melting sea ice and onto land, they have to compete with the local grizzly bears for the available food.

RELATED: LEMURS: WHERE WILL THEY GO?

“The smaller size and low population density of grizzly bears in the Arctic provides a clear indication of the nutritional limitations of onshore habitats for supporting large bodied polar bears in meaningful numbers,” says Rode. “Grizzly bears and polar bears are likely to increasingly interact and potentially compete for terrestrial resources.”

Few foods are as rich in energy as marine mammals, such as seals, and studies suggest that polar bears consume the highest lipid diet of any species. Foods found on land, however, are dominated by high-protein, low-fat animals and vegetation. Polar bears are not physiologically suited to the digestion of plants, and it would be difficult for them to consume the volumes required to support their large body size.

More About the Polar Bear Diet

The polar bear’s main food is the ringed seal. Seal blubber is a rich food source, and an adult polar bear can eat 100 pounds of it in one sitting. The seals use their sharp claws to cut holes in the ice through which they can breathe, and the bears wait nearby in the hope of catching a meal. These bears also stalk ringed seals that are napping on the ice.

Watching Over the Bears

The USGS is leading numerous investigations into the polar bear response to sea ice loss through its Changing Arctic Ecosystems Initiative. One current study includes the examination of what polar bears are eating, how they are behaving, and the rate at which their health and numbers are declining.

This research was conducted by scientists at the USGS, Washington State University, and Polar Bears International. Their findings are published in the journal Frontiers in Ecology and the Environment.

Featured Image: Photo of Tasul the polar bear, courtesy of the Oregon Zoo