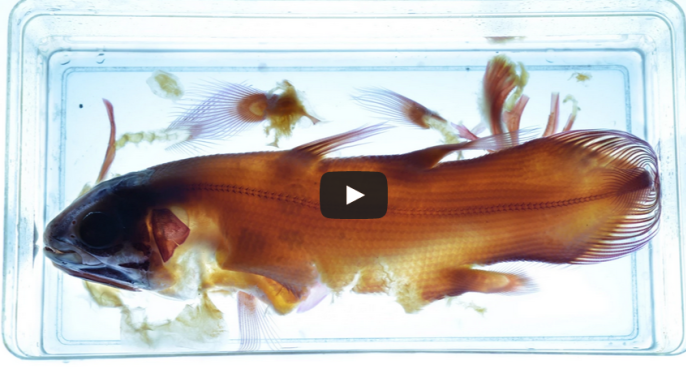 Find out how coelacanth bodies are preserved so you can view them in natural history museums. Video, Shelf Life Episode Three.

Coelacanths (see-la-kanths) are large, ancient fish with arm-like fins and armor-like scales. They can be found in the fossil record through the time of the dinosaurs, but disappear about 70 million years ago. Everyone thought the creature was extinct.

Then, in 1938, the coelacanth splashed into the modern world when one was caught in a fishing net off the coast of South Africa. The prehistoric specimen pulled from the fishing net was discovered by Marjorie Courtenay-Latimer, the curator of the East London Museum, located in South Africa. The scales, head plates, and fin formation of this strange fish reminded her of  ancient fossils, so she contacted J. L. B. Smith, an ichthyologist at Rhodes University.

Courtenay-Latimer fought the South African summer heat to preserve the fish until Smith could examine it. Smith later wrote: “Although I had come prepared, that first sight hit me like a white-hot blast and made me feel shaky and queer…. Yes, there was not a shadow of a doubt, scale by scale, bone by bone, fin by fin, it was a true Coelacanth.”

Needless to say, Courtenay-Latimer’s exciting discovery rocked the scientific community. “It would be like someone calls up with a picture of a Tyrannosaurus saying, ‘This was running around the vegetable patch. Is it interesting?’ Yeah, it was,” explains Melanie L. J. Stianssny, a curator in charge of vertebrate biology at the American Museum of Natural History.

Don’t have time to visit the American Museum of Natural History? We’ve got your back! You are invited to take a virtual trip behind the scenes of New York’s famous museum.

Shelf Life is a collection for curious minds—opening doors, pulling out drawers, and taking the lids off some of the incredible, rarely seen items in the American Museum of Natural History. If you missed the first two episodes, catch them here: Shelf Life, Episode 1: 33 Million Things and Shelf Life, Episode 2: Turtles and Taxonomy.

You can even watch Shelf Life while eating ice cream and wearing bunny slippers, unless you are lactose intolerant and/or leporiphobic.