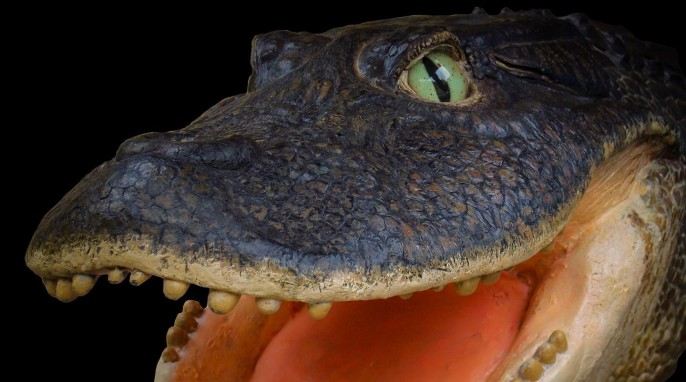 Today, the Amazon River basin is well known for its biodiversity, but the area also has a long history of abundant life. Thanks to an international team of researchers, we now know that thirteen million years ago at least seven different species of prehistoric crocodile hunted in the swampy waters of what is now northeastern Peru.

Evidence of this hyperdiverse group of crocs was found in Amazon bone beds, and it shows the largest number of prehistoric crocodile species co-existing in one place at any time in Earth’s history. This cohabitation was likely made possible by an abundant food source that forms only a small part of the modern crocodile diet: mollusks such as clams and snails.

“The modern Amazon River basin contains the world’s richest biota, but the origins of this extraordinary diversity are really poorly understood,” says John Flynn, from the American Museum of Natural History. “Because it’s a vast rain forest today, our exposure to rocks–and therefore, also to the fossils those rocks may preserve–is extremely limited. So anytime you get a special window like these fossilized “mega-wetland” deposits, with so many new and peculiar species, it can provide novel insights into ancient ecosystems. And what we’ve found isn’t necessarily what you would expect.”

The Amazon River formed about 10.5 million years ago. Before that, the area was a massive wetland system, filled with lakes, swamps, and rivers that drained northward toward the Caribbean.

Since 2002, Flynn has been leading expeditions to fossil deposits in the Pebas Formation in northeastern Peru. These deposits have preserved fossils from the Miocene era, including the seven species of prehistoric crocodile. Three of these species are entirely new to science, the most unusual of which is Gnatusuchus pebasensis, a short-faced caiman with small, rounded teeth. The animal could have used its snout to “shovel” mud bottoms, digging for clams and other mollusks. The new work suggests that the rise of Gnatusuchus and other “durophagous,” or shell-crunching, prehistoric crocodiles happened at the same time as a boom in mollusk diversity and numbers.

“When we analyzed Gnatusuchus bones and realized that it was probably a head-burrowing and shoveling caiman preying on mollusks living in muddy river and swamp bottoms, we knew it was a milestone for understanding proto-Amazonian wetland feeding,” says Rodolfo Salas-Gismondi, from the University of Montpellier in France, and the National University of San Marcos’ Museum of Natural History in Lima, Peru.

Besides the round-nosed prehistoric crocodile Gnatusuchus, the researchers also recovered the first unambiguous fossil much like the modern caiman Paleosuchus, which has a longer and higher snout shape for catching a wider variety of prey, including fish.

“We uncovered this special moment in time when the ancient mega-wetland ecosystem reached its peak in size and complexity, just before its demise and the start of the modern Amazon River system,” Salas-Gismondi explains. “At this moment, most known caiman groups co-existed: ancient lineages bearing unusual blunt snouts and teeth along with those more generalized feeders representing the beginning of what was to come.”

The research suggests that when the modern Amazon River System developed, mollusk populations dwindled and the specialized mollusk-eating crocodile species went extinct. Caimans with a broader palate evolved into the generalist feeders that now dominate the Amazon. Today, only six species of caimans live in the entire Amazon basin and, in contrast to their ancient relatives, they rarely share the same habitat.

This study of prehistoric crocodile species is published in the journal Proceedings of the Royal Society B. The study was partially funded by NASA, The Field Museum, the AMNH Frick Fund, the ECLIPSE program of France, the National Center for Scientific Research (CNRS), the Institute of Research for Development (IRD), and the Escuela Doctoral Franco-Peruana de Ciencias de la Vida.

Top Image: Life reconstruction of the head of Gnatusuchus pebasensis, a 13-million-year-old, short-faced crocodile with rounded teeth that was thought to use its snout to dig for clams and other mollusks. Model by Kevin Montalbán-Rivera. (© Aldo Benites-Palomino)

How HPV Tricks Your Immune System