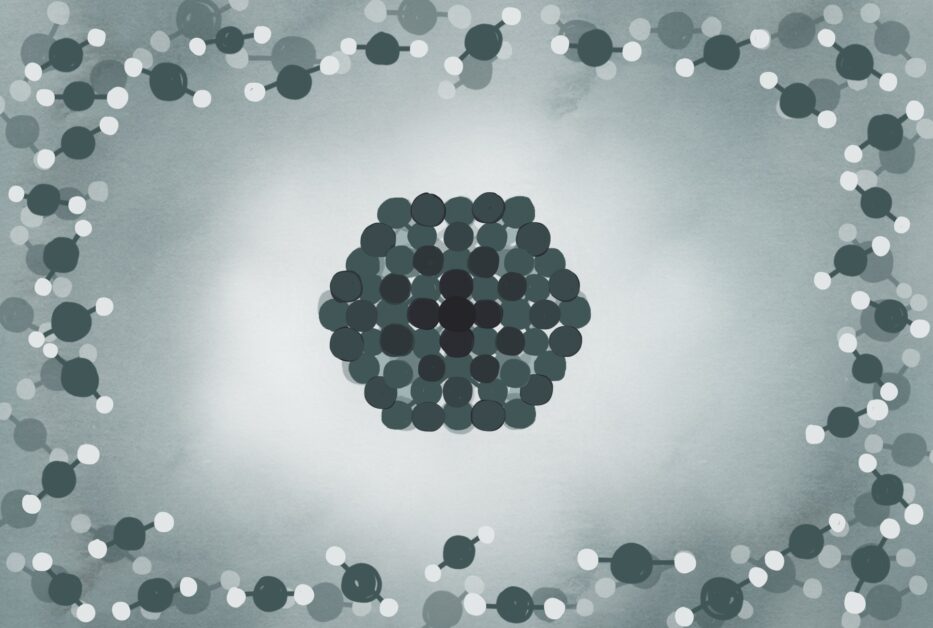 Carbon dioxide is a common greenhouse gas that can be reduced through exposure to green light. Carbon-imbued silver has many possible applications.

Exploring the possibilities of carbon-imbued silver

Recently, there has been considerable global research focused on developing technologies able to transform the common greenhouse gas carbon dioxide using energy from visible light. Researchers at the University of Ottawa, led by Dr. Jaspreet Walia (post-doctoral fellow in the School of Electrical Engineering and Computer Science) and Dr. Pierre Berini (professor and research chair in surface plasmon photonics), discovered how to use visible light to reduce carbon dioxide gas into solid carbon. Their discovery may lead to new scientific innovations including artificial photosynthesis, light manipulation at the nanoscale, and pollutant sensing carbon platforms (Berini et al., 2001).

Carbon-imbued silver: The Details Behind The Reaction

The researchers studied a two-step catalytic reduction of high-purity gaseous carbon dioxide to yellow light-emitting solid carbon that occurs via a fixed low energy pathway. This reaction was conducted on a silver grating surface illuminated with visible green light at a wavelength of 532 nm. The green light excites electrons found in surface plasmons on the silver grating. These electrons are transferred to the carbon dioxide molecules, which are reduced to carbon monoxide. Carbon monoxide is further reduced, leading to dissociation of carbon and oxygen. The carbon-imbued silver acts as a catalyst for this reaction. The resulting solid carbon emits an intense yellow light through a process called photoluminescence. The carbon deposits that result from this reaction are very small, existing on the nano-scale. The researchers used a light emission recording technique called Raman Scattering and photoluminescence imaging to monitor carbon deposit formation throughout the experiment (Berini et al., 2001).

Plasmonics is a fairly new physics topic that is part of the study of nanophotonics and nano-optics. It involves the investigation of electron oscillations in metallic nanostructures and nanoparticles. Surface plasmons have unique optical properties such as the capacity to confine light at the nanoscale. They are also very sensitive to the surrounding medium and the properties of the materials on which they propagate (Barbillon, 2019).

It was important that this experiment was carried out on an appropriately designed metallic grating. The silver grating used needed to be able to support a well-defined distribution of excited electrons over the entire illuminated area. Surface plasmon excitation and decay had to occur efficiently on the surface and thermal effects needed to be minimized. This way, heat generated by the visible light would not affect experimental results. It was important that clean and unoxidized silver grating surfaces were used as well (Berini et al., 2001).

To maximize efficiency of experimental processes, the carbon-imbued silver grating surfaces were designed using commercial laboratory software called COMSOL. This software implemented advanced mathematics in order to optimize geometry of the incoming visible light and the surface plasmons on the silver. The COMSOL software determined that rectangular grating was best suited for the experiment and provided experimenters with the specific ridge height and spacing that would result in optimized results (Berini et al., 2001).

Electron Transfer Between Metal and Adsorbate

The results obtained from this research reveals that light can be harvested to drive new chemical transformation pathways on metal surfaces (Berini et al., 2001). Visible light excites charge carriers such as electrons with the energy necessary for these reaction pathways to occur. When a metal atom absorbs energy from visible light, electrons are excited from lower energy states to higher states. The energy is released when electrons fall to lower energy states once more. When material is adsorbed to a metal surface, excited electrons fall from the Fermi energy level (the energy level located between the conduction and valence bands in transition metals) to unoccupied molecular orbitals in the adsorbate (Kahn, 2015). In the case of the research conducted at University of Ottawa, carbon dioxide was the material adsorbed to the silver metal surface. Excited electrons fell from the Fermi energy level of the silver metal atoms to empty molecular orbitals in the carbon dioxide, releasing energy necessary to facilitate the carbon dioxide reduction reaction (Berini et al., 2001).

The carbon deposits resulting from the catalyzed reduction of carbon dioxide were composed of carbon nanoparticles. Nanoparticles are nanometer (10−9 m)-scale assemblies of multiple atoms. Despite being made up of many atoms, they are not necessarily visible to the naked eye. Their dimensions are between that of subatomic ions (10−10 m) and macroscopic materials. Nanoparticle surfaces themselves may have distinct properties separate from the surrounding surfaces in which they are found (Banfield & Zhang, 2001). Due to this, scientists can create silver grating imbued with light emitting properties from carbon nanoparticles that also retains the properties of regular silver (Berini et al., 2001).

Further experimentation supports the fact that the carbon nanoparticles are responsible for the observed luminescence. The researchers were able to remove the carbon deposits from the grating surfaces upon exposure to air. The silver grating surface no longer had light emitting properties as a result, even though the grating was still exposed to visible green light (Berini et al., 2001).

The silver grating surface was examined after 30 minutes of exposure to carbon dioxide gas and green visible light at 532 nm using an advanced imaging technique called high-resolution helium ion microscope (HIM) imaging (Berini et al., 2001), the instrument of choice for patterning, imaging, and analytics on the nanoscale (Audinot et al., 2019). The deposits formed from the reaction included highly luminescent carbon nanodots and larger carbon nanostructures. These larger structures appeared in areas where localized fields generated by plasmons were the strongest (Berini et al., 2001).

The electric field on the surface of the silver grating is enhanced over the area illuminated by visible green light. This area has a constant supply of excited electrons due to continuous irradiation by the light source.The magnitude of the electric field near the surface of the silver grating increases up to a factor of 15 upon absorption of the green light. The strongest electric fields and highest electron densities were found to occur near the corners of the grating ridges. Therefore, the reduction of adsorbed carbon dioxide occurs most readily in these areas (Berini et al., 2001).

Furthermore, it was discovered that through repeating the carbon dioxide reduction process, it is possible to selectively integrate the luminescent carbon deposits with the silver grating surface. This leads to the possibility of “reconfigurable light-emitting metasurfaces”. In other words, it is possible for scientists to manipulate the spatial distribution of carbon in the silver grating (Berini et al., 2001).

The reduction of carbon dioxide via excitation of surface plasmons using green light on rectangular silver grating is a reaction that has many potential uses (Berini et al., 2001). Plasmonic systems have many practical applications, including use in biosensors, optical devices, and photovoltaic devices (Barbillon, 2019). Therefore, it is possible that the manipulation of the distribution of carbon nanodots within the silver metal and the reversibility of the carbon dioxide reduction reaction may be useful in the production of these devices. Further research in the field of nanophysics is needed to reveal more on the practical uses of carbon-imbued silver (Berini et al., 2001).

This study was published in the peer-reviewed journal Optica.

All illustrations are the work of Angie Lo.

Crystal Wang teaches chemistry online. She earned her bachelor’s degree in biochemistry from Binghamton University and enjoys blogging about science. Her latest project is The Buzz, a blog about insects and entomology. Connect with Crystal on Facebook.