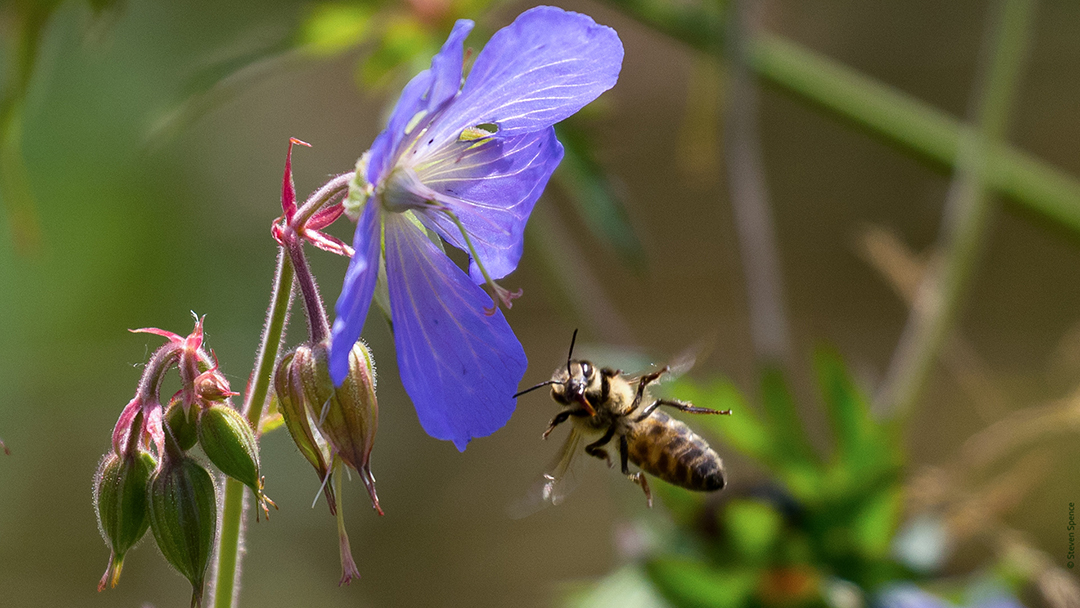 Meet the pollinators! These are the birds, bees, and more that handle pollination so that we can enjoy the fruits of their labors.

Currently there is significant concern about the decline in honeybee populations. There are various factors behind the decimation of the hives, but first some fundamental questions:

Pollination is the transfer of pollen to a stigma, ovule, flower, or plant to allow fertilization of seeds and growing new plants.

Pollinators Smell Sex and Candy in the Air

Spring is a time many of us look forward to after the snows of winter, and the fragrance of the first flowers and blossoms that delight us also promise a sweet reward for pollinators.

Pollen is a plant’s near-equivalent to male animals’ participation in sex. Pollen is not exactly plant sperm, but a precursor called a microgametophyte. If a grain of pollen lands in the right place on a receptive flower, it produces a tube which carries the plant sperm into the female ovary.

Origins of Pollen and Pollination

The use of pollinators is a comparatively recent development in land plants. The first plants to emerge on land were probably liverworts or moss. Scientists have fossil evidence that the ancestors of modern moss began spreading on land approximately 450 million years ago in the Ordovician Period. Mosses and similar types of plants reproduce using spores.

A second major group of plants, the ferns, emerged roughly 360 million years ago in the Devonian Period. A principle difference to the mosses is that ferns are vascular plants, which have a system of vessels to transport water to different parts of the plant. Reproductively, however, ferns are similar to mosses, because they too use spores to reproduce.

By 320 million years ago, during the Carboniferous Period, the first fossil evidence of seed bearing plants emerged. These earliest seed bearing plants were gymnosperms, which produce pollen. Well-known examples of the gymnosperms include conifers such as pine or spruce trees. These types of plants do not require pollinators. They just produce copious amounts of pollen and rely on the wind to disperse it.

The Rise of the Flowers

There was a time on earth when there were green plants, but no flowers. In fact, the origin of flowering plants continues to be in question. Multiple potential links have been traced back to about 160 million years ago. A flower fossilized while it was actively reproducing has been recently discovered in 100 million year old amber. That’s about the same age as the oldest known fossilized bees.

What advantages did flowering plants develop over other varieties of plants? By relying on animals to spread their pollen, instead of the wind, flowering plants were better able to ensure that their pollen reached a receptive plant. Additionally, the animal pollinators increased the distances at which plants could successfully reproduce while also increasing the genetic diversity. Genetically diverse species tend to be healthier and better able to resist diseases.

While we generally think of bees as pollinators, especially honeybees and bumblebees, there are other insects and even vertebrates that perform this function.

What kind of plants are pollinated by which types of animals is often a result of specialization. Bees are common pollinators and visit a wide variety of plants. They are responsible for pollinating many fruits and nuts, such as apples, blueberries, almonds, peaches, oranges, and so forth.

Bees’ choice of flowers are influenced in part by their vision. Bees can see in the ultraviolet spectrum, but not in the red range; therefore, they have a strong preference for flowers with yellow or blue markings. A bee has peak sensitivity in ultraviolet, blue and green frequencies.

Butterflies, on the other hand, can see the color red and have a preference for yellow, orange and red flowers.

Do wasps pollinate? Yes! Wasps, which are closely related to bees, have a similar spectral sensitivity. For example, foraging wasps of Vespula squamosa show a preference for yellow. Fig-wasps use their sense of smell to find suitable flowers.

Flies have similar vision to bees. Hoverflies are especially important pollinators, often attracted to flowers with yellow or white coloring.

Moths and bats, being nocturnal, are attracted to flowers by smell and often prefer pale colored flowers, which may be easier to see in low light-levels.

Beetles are important pollinators, especially in Australia, but there is contradictory evidence regarding color preferences and smell preferences. Some theories suggest that a beetle will target pale flowers and strong scents. However, some beetles have shown a preference for red flowers without a strong fragrance.

Birds have the ability to see red. Many red flowers are thought to be adapted for bird pollination.

Whether you have a large garden space in the suburbs or just a small window box or rooftop garden in the city, you can grow plants that feed your friendly neighborhood pollinators!

FLOWER POWER: THE PHYSICS OF POLLINATION

URBAN GARDENS A HAVEN FOR POLLINATORS

Arnold, “Flowers through insect eyes: The contribution of pollinator vision to the evolution of flower colour.”

Sarah Elizabeth Joan Arnold, “Flowers through insect eyes: The contribution of pollinator vision to the evolution of flower colour.” Thesis submitted for the degree of Doctor of Philosophy, Queen Mary, University of London 2010.

University of Zurich. “New fossils push the origin of flowering plants back by 100 million years to the early Triassic.” ScienceDaily. ScienceDaily, 1 October 2013.