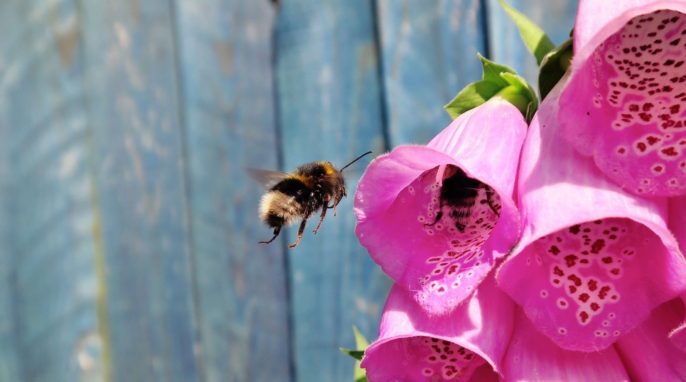 Are cities the ideal home for bees? European scientists found that urban bees can have surprisingly good pollination rates.

Few people would consider cities the ideal home for bees, but what if these dense population centers could provide the means for healthy cohabitation? Scientists from Europe recently examined how bumblebees visit and pollinate flowers across urban and agricultural regions and found that urban areas can have a surprisingly beneficial effect on pollination rates. The reasons behind these results not only provide insight into how cities could be designed to better care for bees but also signal yet another danger of farming monocultures.

The paved roads, sterile buildings, and suffocating pollution of urban areas have long been seen as major threats to bee health. Urban construction typically fragments natural biodiversity and destroys available habitat for ground nests, the homes of the familiar bumblebee. Pollinators such as bumblebees are critical for the long-term sustainability of floral diversity, so many scientists imagine this urban sprawl will slowly kill off local plant ecosystems.

Humans are taking over natural landscapes not only through urban development but also through farming. As monocultures spread to increase production to feed an ever-expanding human population, it is unclear how this homogeneity will affect bee health. However, there are signs that the negative view of urban effects on bee health may be too simple. Some urbanization can create varied environments that enhance pollination by creating diverse habitats such as small gardens full of flowers on rooftops or in backyards. Some studies suggest that this type of environment actually promotes bumblebee colonies even more than farmland does.

Beautiful gardens tended by suburbanites don’t come without their dangers. Parasites found in trees and plants can also spread to these areas and, once they infiltrate a bee colony, can change how bees forage, endangering the health of the entire pollinating group. Two of bees’ primary enemies are Crithidia bombi, a gut parasite that affects reproduction and foraging behavior, and Nosema bombi, which reduces worker bee survival.

To clarify what type of anthropogenic land use and which parasites are dangerous to bumblebees, scientists in Germany sought to determine whether there are improved foraging opportunities in suburbs and urban locations and, if there are, whether they outweigh the potential dangers of parasites overrunning bee colonies. To explore this question, researchers set up experimental plant communities in both farming and urban environments to understand how each type of land use affects both parasite density and bee foraging frequency.

Nine sites in Germany spanned the spectrum from agricultural to urban land use, based on satellite data. Each site contained a square plot of 25 meters per side and included the same set of four plants to systematically measure pollination success across them. Over the course of 32 days, researchers released bees and observed their behavior at each site only on days that were dry, warm, and not windy to ensure that changes in weather didn’t affect counts of urban bees differently at each site.

From this meticulous data collection, the researchers calculated visitation rates of bumblebees as well as each of the two parasites, Crithidia and Nosema. To estimate the prevalence of the parasites, scientists extracted DNA samples from a total of 314 bees across all sites and matched the sequences with those of the parasites.

After the month of bee watching, the scientists piled all their data into several statistical models to understand what type of bee behavior correlated with land use and parasites. Surprisingly, bees in urban settings pollinated three of the four flowers significantly more than they did in farmlands. This somewhat counterintuitively suggests that agricultural expansion is more detrimental to pollinators than dense urban environments. This unexpected relationship may indicate that urban and suburban cities can contain more biodiversity through gardens and lawns than monocultures that replace a multitude of naturally occurring flowers and plants with a single crop.

Urban environments were not solely a paradise for bumblebees, however, as these regions also had a higher prevalence of the Crithidia parasite than did agricultural areas. Male bees especially exhibited extraordinarily high levels of infection, possibly due to their poorer immune systems. Seasonal effects could also play a role, as males become more abundant in summer, when the parasite thrives.

This onslaught of parasites is not enough to hinder the pollination success of urban bees and visitation of plants in urban settings. Overall, the benefit that bee colonies derived from the increased diversity of habitat in cities and suburbs outweighed the danger of these parasites. These results suggest that suburban sprawl may not necessarily be costing the lives of bumblebees, and homeowners can continue to help sustain colonies by cultivating locally suited habitats. Instead, it is the monocultures of mass agriculture that may be a greater danger to the long-term viability of bumblebees. Although parasites have more difficulty surviving in farming regions, the lack of any biodiversity severely hinders the survival of bee colonies.

It is important to mention that this study examined relative effects between agricultural and urban land use and their effects on bee colonies. Although urban regions may be better suited than farmland for long-term bee health, both may be decreasing the size and number of bee colonies in absolute terms. It will be important for future studies to compare these regions to a variety of control regions of naturally occurring, wild biodiversity. Nevertheless, this study provides hopeful results that well-cultivated suburban and urban gardens can provide resilience for a rapidly declining global bee population.

Dr. Jonathan Trinastic earned his PhD in physics at the University of Florida. He is interested in renewable energy technology and sustainable energy policies, as well as living by Ernst Schumacher’s mantra that “small is beautiful.” Read more of Jonathan’s work at his personal blog, Good Night Earth, and follow him on Twitter @jptrinastic. All views expressed are solely his own and do not reflect those of his employer.