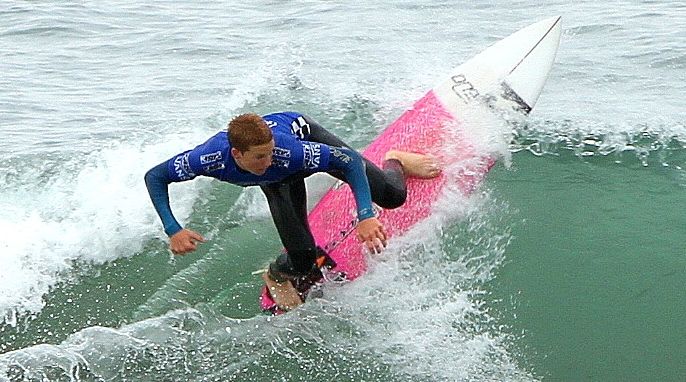 Surfers seem to be dancing on ocean waves, but what keeps them afloat or moving? Let’s explore the physics at play in surfing.

Surfers catching the perfect wave rely on years of experience and learned intuition to navigate through a cresting tunnel of water. But surfing can also be seen as a surfer’s constant minuet with dozens of changing forces that threaten to tumble even the most expert into the crashing waves. Let’s explore the most important forces at play to understand this unique dance with water that so many love.

The Physics of Surfing

Science Connected: When surfers wait for the right wave, they can let other waves pass underneath them. What forces are at play?

Dr. Jonathan Trinastic: Surfing encompasses many physical principles—gravity, buoyancy, torque, and waves. We’ll get into wave physics a little bit later, but thinking about someone standing on a surfboard is a great opportunity to introduce the first three concepts and how they affect a surfer’s ability to control the board.

Imagine a surfer standing at the direct center of the surfboard. Two major forces are at play: gravity, which pulls the surfer and the board down, and the buoyant force, which actually pushes the floating surfboard up in the opposite direction. We are all familiar with the force of gravity keeping us on the ground. The most important idea about gravity, in this case, is that it is stronger when acting on something with more mass.

Buoyancy, on the other hand, isn’t as intuitive. Think about the rubber ducky you might have played with as a kid, floating in the bathtub. When we place the duck in the water, it partially submerges but doesn’t sink all the way to the bottom. Why is that? As the duck begins to sink, it feels more upward pressure from the deeper water in the tub. Since the duck is made of lightweight, low-density material, this upward pressure eventually overpowers gravity and keeps the duck from sinking. Denser objects like a medicine ball or weights would sink to the bottom because the force of gravity on it is much stronger than the upward buoyant force from the water.

RELATED: SURFERS PICK UP THE SLACK TO MONITOR WATER

This same logic applies to surfboards. The lightweight surfboard is designed in a very specific way, such that the upward buoyant force acting on it is greater than the force of gravity acting down, allowing it to float. Now, add the surfer on top of the center of the board. If the surfer is stationary, the force of gravity acting on her to pull her down will likely overcome the buoyant force on the board, and the surfer and the board will sink. However, as a surfer is waiting for the right wave, she is probably moving through the water, and waves are continuously rising and falling under her. The water moving across the bottom of the board creates many additional upward forces (called hydrodynamic forces) that keep the surfer afloat rather than tumbling into the water. There are a lot of other interesting physical principles at work here, like conservation of momentum, that also help to prevent surfers from sinking into the ocean.

Science Connected: In physics terms, how can surfers maintain balance when they stand up on top of their boards?

Trinastic: Torque is the key to understanding how surfers maintain control. As I mentioned earlier, water is constantly undulating underneath the surfboard, which creates additional varying and unpredictable hydrodynamic forces acting on all parts of the board. If the surfer is in the center of the board, then gravity pulls her down from her center of mass. Similarly, if the surfboard is directly horizontal, the buoyant force acts upward at the center of the board. In other words, gravity and buoyancy act in opposite directions at the same location. Now, let’s say a rush of water suddenly pushes up the back of the board, far from the center. This force from the water causes the board to want to rotate, threatening to throw the surfer into the water. Any force that creates a tendency to rotate like this is known as a torque.

A surfer is constantly battling attacking and fleeting torques because of the chaotic motion of waves pushing the surfboard from all sides. To counter these, the surfer must learn to apply her weight in particular directions and locations to create torque in the opposite direction as that of the waves, to (generally) cancel out the rotational forces and avoid getting a face full of water.

Science Connected: What happens when a surfer stands near the front or back of the board?

Trinastic: So far, I have only described a surfer standing at the center of the board, in which case her center of mass points directly downward, in opposition to the upward buoyant force acting on a horizontal board. Things become more complicated when the person moves away from the center, but this is critical for braking and adjusting speed. As soon as the surfer moves to the back, for example, her gravitational force now shifts away from the center and points downward from the back edge. This shift in the location of the force creates a torque and rotates the back of the board into the water. As this happens, more of the back of the board is now submerged, which completely changes the strength of the buoyancy force and shifts it back to the newly submerged part of the board. This readjustment continues until the gravitational force and buoyant force generally balance out, removing the torque but now leaving a new form of equilibrium—with the back end of the board submerged and the front part out of the water. This setup is helpful for braking, since the board is now dipping vertically into the water, which increases resistance to water flow. Think about dipping your hand in a river perpendicular to the flow of water. You probably felt the water deflected to the sides of your hand. The same effect happens with the back end of the surfboard and helps to slow the surfer down.

The same idea can be applied if the surfer moves to the front of the board. In this case, the force of buoyancy will shift forward to balance the gravitational force at the front edge. Similar principles would allow for turning by shifting weight to the left or right side of the board.

Science Connected: What is a wave? What forces create waves in water? And what influences the speed of these waves?

Trinastic: A wave can be a very difficult phenomenon to define because it describes a motion through a material, not the material itself. Think of a string attached to a wall. The string is not a wave, but a wave is created if I swing the other end of the rope up and down in a consistent pattern. The energy I use to swing my arm is transferred to the rope and transmits a wave from my hand to the wall and back to me. Therefore, the wave contains energy that is transmitted through a material, in this case, the rope.

The same is true of waves in the ocean. High-speed wind essentially rubs against the surface of the water. This friction transfers energy from the fast-moving air molecules to the water molecules. The size of the wave is determined by many factors, including the wind speed and the “fetch,” or the area over which the wind is blowing. As this area increases, more energy can be transferred from the wind to the water, creating a much larger wave crest.

The major point here is that a wave is a form of energy transmission. The ocean is the transmitting medium in this case, and water waves are created as a result of energy being transferred from wind blowing across the surface.

Science Connected: How does a surfer catch a wave?

Trinastic: Let’s start with a wave coming in toward a surfer lying on her board. The surfer begins paddling toward the wave to pick up speed. This is just Newton’s Third Law, which says that the surfer’s force pushing the water back will create an equal and opposite reaction to push the surfer toward the wave.

Just as the surfer hits the bottom of the wave, she should start to feel the water push forward and upward. This hydrodynamic force will push her forward, giving her speed as she jumps up to a low crouch to follow the wave. In addition to the main hydrodynamic force now pushing her up and forward, many smaller forces from minute shifts in water flow will require the surfer to constantly readjust her weight to keep her balance.

She’s riding the wave! But now the crest of the wave will continue to rise higher and higher as it moves closer to shore, creating more hydrodynamic forces that want to push the surfer sideways. If the surfer rides too high up on the wave, these horizontal forces from the crest can push her over. On the other hand, if she’s too conservative and stays too low, she’ll lose the speed conferred to her by all the energy that has accumulated in the wave. So the skill in surfing is to ride that perfect line between balance and speed. Despite this threat, it is possible to ride higher up in a wave for a short amount of time by leveraging the centripetal force, in a way very similar to a skateboarder on a halfpipe as I discussed in this previous post.

Also, if the wave begins to turn, the surfer will also need to apply her weight to the left or right side of the board to apply a torque and gently turn the board to maintain its path along the wave as well.

It’s incredible to think about this whole process in the context of gravity and buoyancy I talked about earlier! Buoyancy is acting up on the board through this process, as gravity is constantly trying to pull the surfer into the water. It’s really the hydrodynamic forces from the wave that work with the buoyant force, along with conservation of momentum, to help keep the surfer up.

RELATED: SCIENCE OF SLOSHING: WHY FOAM IS IMPORTANT

Science Connected: In physics terms, how do short boards differ from long boards in the context of surfing?

Trinastic: Short boards will be much easier to turn in the water compared to long boards. This difference is due to a physical concept known as moment of inertia. Inertia describes how difficult it is to change something’s motions once it has started moving. Long boards have a lot more mass far from the axis of rotation of the board, and this creates much more inertia to resist a change in direction that a surfer is trying to make.

Although long boards may not be as nimble, they reach higher speeds than short boards, mainly because their larger surface provides more area for water to push the surfer along.

Featured image: US Open of Surfing at Huntington Beach by Verse Photography.

Dr. Jonathan Trinastic earned his PhD in physics at the University of Florida. He is interested in renewable energy technology and sustainable energy policies, as well as living by Ernst Schumacher’s mantra that “small is beautiful.” Read more of Jonathan’s work at his personal blog, Good Night Earth, and follow him on Twitter @jptrinastic. All views expressed are solely his own and do not reflect those of his employer.