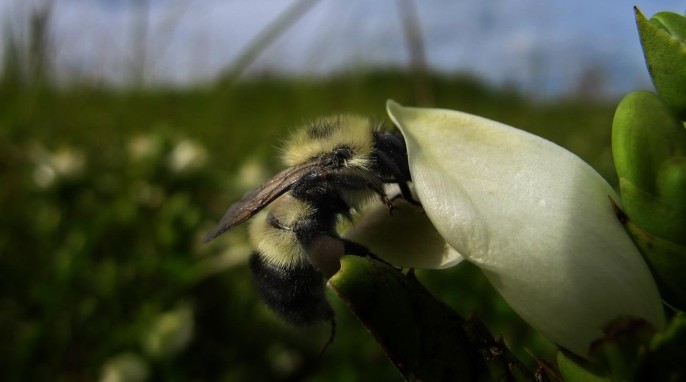 Around the world, honey bees are in decline and under constant threat from parasites. This ongoing problem threatens fruits, vegetables and other crops that make up much of the food supply for people. However, naturally occurring chemicals found in flowers of certain plants could be just the right prescription for sick bees, according to new research from Dartmouth College.

The chemicals that occur naturally in floral nectar “may play a vital role in reducing bee-parasite interactions,” according to researcher Rebecca Irwin. The study found that chemicals in some types of floral nectar, including the nicotine found in tobacco plant nectar, can significantly reduce parasite infection in bees. The research team suggests that growing plants with high levels of these chemical compounds in the vicinity of farm fields could create a natural “medicine cabinet” that improves survival of diseased bees and pollination of crops.

Plants produce chemicals called secondary metabolites to defend their leaves against plant-eating animals. These chemicals also appear in the nectar gathered by bees and other pollinators, but remarkably little is known about the impacts of nectar chemistry on pollinators, such as bees.

The results showed that consumption of these chemicals correlated with a decline of parasite infections in bees by up to 81 percent. If this result can be replicated, it could significantly reduce the spread of parasites within and between bee colonies.

The chemicals identified by the study as beneficial to the health of bees include the alkaloids anabasine and nicotine, the iridoid glycoside catalpol and the terpenoid thymol.

This study about healing sick bees is published in the journal Proceedings of the Royal Society B. The team included researchers from Dartmouth, the University of Massachusetts-Amherst, and the University of Vermont.