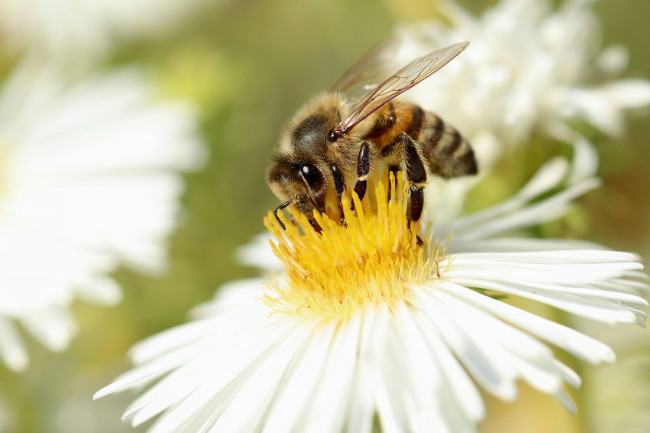 To better attract pollinators, plants change the chemical and physical properties of their petals to produce alluring colors.

Whether it’s the scarlet warning to would-be consumers of a poisonous mushroom, or the alluring blush of cherry blossoms in spring, nature’s colors aren’t just for show—they’re crucial to communication between plants and animals.

But when it comes to flowers, some species present a whole spectrum of shifting colors undetectable by the human eye. A team of researchers at the University of Cambridge in England have found that some plants are able to chemically regulate the appearance of their petals to make them more attractive to pollinators—a tactic that may prove crucial to survival in a world where pollination is increasingly competitive.

Among botanists, there is already extensive research about plant pigmentation—how and why plants use colors in their foliage and flowers. But this new study looks at how flowers use microscopic forms to produce a shifting, iridescent effect that involves both physical structure and chemical engineering.

Plants have a waxy, protective layer called a cuticle on their parts above ground, such as stems, leaves, and petals. On these cuticles, some plants can form three-dimensional structures that are often parallel and create iridescent glints invisible to human vision. For example, some flowers can create iridescence on the blue-UV spectrum of light—which bumblebees can see—by bending their cuticles and creating tiny ridges that reflect light differently depending on the angle from which it is viewed.

According to this study’s lead author, Dr. Edwige Moyroud of Cambridge’s Department of Plant Sciences, plants are “formidable chemists,” using these microscopic patterns for several reasons, from attracting pollinators to warding off animal predators and preventing disease.

“They are striking examples of evolutionary diversification and by combining experiments and computational modeling we are starting to understand a little bit better how plants can fabricate them,” Moyroud says.

What remained a mystery was why only some species of flowers could produce these effects, and why such effects only occurred in certain areas of the petals.

Moyroud, along with a team of eleven researchers from Cambridge and the Royal Botanic Gardens, analyzed the cuticle of the Venice mallow, a hibiscus native to Australia, to determine how its petal patterns changed and whether they could regulate the conditions under which they changed.

The team originally hypothesized that patterns of color were created by the way the cuticle cells grew and how quickly they formed. Initially, after observing the petals’ growth, the researchers saw patterns appear in the cuticles when the cells grew longer. This suggested the growth of cells was important to the equation, but the researchers later found that there was more to the picture when they attempted to regulate the growth of the cuticle cells. Other physical properties like the thickness of the cuticle layer and cell expansion didn’t affect the patterns.

Ultimately, the team found that this color-changing phenomenon is driven more by chemical forces than by physical forces; this conclusion was reached after determining that the chemical structures of smooth areas on the petals were different from areas with iridescent ridges.

“The next question we want to explore is how different chemistries can change the mechanical properties of the cuticle, as a nanostructure-building material,” Moyroud says. “It may be that different chemical compositions result in a cuticle with differing architecture or with different stiffness and hence different ways of reacting to the forces experienced by cells as the petal grows.”

Paving the way for pollinators

According to Cambridge professor Beverly Glover, this research is useful because it demonstrates not only how pollinators are attracted to plants, but also how plants interact with their environments as a whole. “For example,” explains Glover, “species that are closely related but that grow in different geographic regions can have very different petal patterns.”

The study also has the potential to influence policies and practices that impact the plant-pollinator relationship. Pollination is a crucial process for 35 percent of the world’s crops, which means any knowledge gained about pollination can have a major impact on protecting the world’s food supply and biodiversity. There is more than meets the eye to knowing how plants attract bees, butterflies, birds, and other pollinators—this information can help inform agricultural policies and make us better conservationists for generations to come, whether we see it or not.

This study was published in the peer-reviewed journal Current Biology.