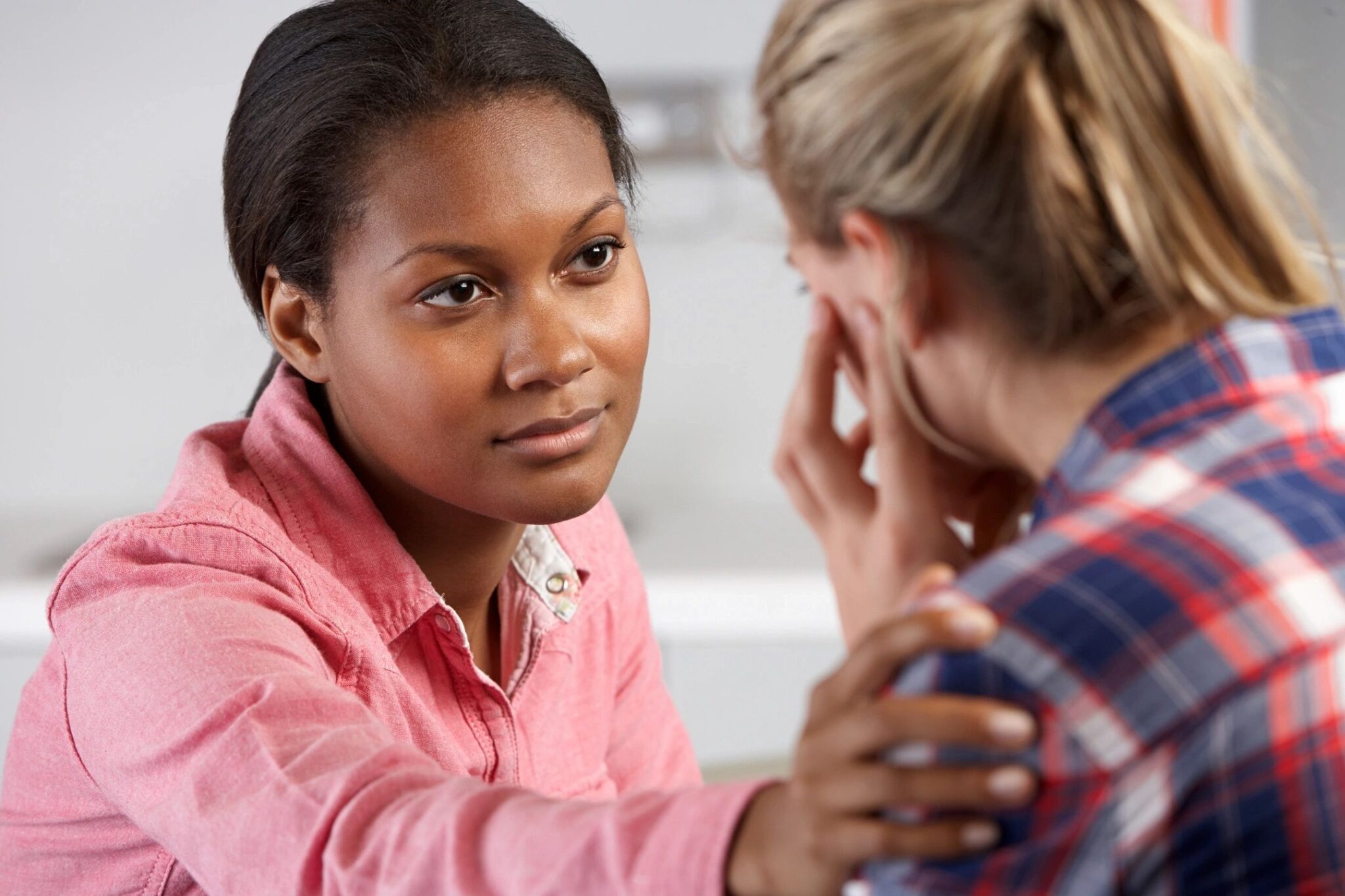 Scientists suspect there may be a biological basis for depression–it may even be coded for in our DNA. Is depression in our genes?

World Health Organization estimated that more than 300 million people around the world are currently affected by depression. That’s just over 4 percent of the world’s population. Despite how serious this disorder is and the huge numbers of people that suffer from it, there is still a lot of stigma associated with having depression, and people often misunderstand what causes it (Jorm, 2000). You may have heard people say that depression is all in someone’s head and that they should just get over it. However, scientists believe that there is a biological basis for depression—it may even be coded for in our DNA. So is depression in our genes, or is it just all in our heads?

It’s completely normal for everyone to feel sad from time to time. But depression is a lot more than just having the blues. It’s a serious medical condition that affects not just mental health, but physical health as well. People with depression can feel sad or worthless, may lose interest in activities that they once enjoyed, have changes in appetite and sleeping patterns, have trouble concentrating and making decisions, and have thoughts about self-harm. Usually these kinds of symptoms will continue for long periods of time (weeks, months, or even years) and without any apparent reason (American Psychiatric Association, 2013).

Is depression in our genes?

It’s been known for quite a while that depression seems to run in families. Having a parent or sibling with depression increases the likelihood that you might also develop depression. For example, an analysis by Sullivan, Neal, and Kendler (2006) estimated that children who have depressed parents are about three times more likely than other children to develop depression at some time in their lives. Usually, when we see certain diseases or disorders occurring in family groups, it suggests that there might be a genetic basis to those disorders, as related people share a lot of genetic material. However, we also have to keep in mind that families tend to share the same environment, so it can be tricky to work out if a particular disorder is due to shared genes or a shared environment.

Depression is partially a result of environmental effects but our genes also play a significant role.

To answer this question in relation to depression, researchers have turned to twin studies. Twins allow us to get a better idea of the relative contribution of genes and environment to different disorders. Monozygotic, or identical twins, share almost 100 percent of their genetic information, while dizygotic, or fraternal, twins share only about 50 percent. If our genes determine a particular trait or disorder, we would expect pairs of identical twins to share that trait, while pairs of fraternal twins are less likely to share it because they are less genetically similar.

A number of studies have examined depression in twins and found a link between genes and depression. The largest of these is a Swedish study, which looked at over 42,000 twins (Kendler Gatz, Gardner, & Pedersen, 2006). This study has estimated the heritability of depression at 38 percent, a figure that agrees with previous studies. This means that depression is partially a result of environmental effects but that our genes also play a significant role.

Does this mean there is a “depression gene”?

Although we have determined that there is some genetic basis to depression, it doesn’t look like there is just one gene that is responsible. Instead, there are likely many different genes that all work together to influence whether or not we develop depression, by making us more or less susceptible. Right now, we don’t know all of the genes that may play a role, but we do have a couple of usual suspects.

RELATED: HOW THE PLACEBO EFFECT “TRICKS” THE BRAIN

One of the genes that is often looked at in studies of depression is a gene called SLC6A4. This gene codes for a serotonin transporter. Serotonin is a neurotransmitter, acting as a chemical messenger in the brain. It helps to regulate our mood and our behaviour. Variations in the SLC6A4 gene can change how much of the serotonin receptor is produced and influence serotonin signaling. Two major variants have been found in the promoter region of this gene, known as the long and short variants. The short variant of the promotor results in less of the transporter protein being made, and thus, less serotonin signal can be sent and received in the brain. Some individual studies have found that there is a link between these SLC6A4 variants and how likely people are to get depression (for example Caspi et al., 2003). However, other studies have found no relationship between the different forms of the gene and depression. A meta-analysis by Risch et al. (2009) drew data from 14 different studies and concluded overall that variation in SLC6A4 was not associated with an increased risk of developing depression. This kind of conflicting evidence means that more research is needed to figure out if this specific gene does play a role in depression, and what that role might be.

For people who do develop depression, it might be possible to use this sort of genetic information to determine the most effective treatment.

Another commonly studied gene is BDNF. This gene codes for a protein called brain-derived neurotrophic factor, and it is pretty important for making sure that our neurons grow and mature correctly within our brains. There is some variation in what form of this gene different people have. One tiny change in the gene, called a single nucleotide polymorphism (or SNP), has been suggested to be linked to depression, but once again there has been conflicting evidence. Some studies have found that having one version of the gene makes you more likely to develop depression, while other studies have shown that the chance of developing depression is the same regardless of which version you have (Kishi, Yoshimura, Ikuta, & Iwata, 2018).

The SLC6A4 and BDNF genes are just a couple of examples of genes that have been studied in relation to depression. Other researchers are still trying to identify other genes that might be involved. One of the approaches that can be used is to look at the whole genome, instead of just individual genes. Genome-wide association studies (GWAS) take all of the genetic information from individuals and use it to look for differences between people who are healthy and people who have depression. A new study using this method was published in Nature Genetics earlier this year. Researchers compared the genomes of more than 135,000 people with depression to the genomes of more than 344,000 healthy people, and they found 44 different places where the two groups were different (Wray et al., 2018). Now that these regions of DNA have been found, the next job is to work out which genes are in those areas and how they might be linked to depression. Some of the targets that have been identified so far are genes that help control cell signaling in the brain, genes involved in the production or transport of neurotransmitters, and genes that have a role in neuron development. These genes are now good targets for further research.

What does the future hold?

As we learn more about which genes are involved in depression, it will open up opportunities for us to improve diagnosis and treatment. One day we might be able to routinely test to see which genetic variants people have, and use this as an early warning of their risk of depression. Preventative steps could then be taken to stop depression from happening in the first place. For people who do develop depression, it might be possible to use this sort of genetic information to determine the most effective treatment. The more genetic information that researchers have access to, the greater the chance that they can identify useful genes to use in these types of diagnostic tests. Fortunately, genome sequencing is now becoming cheaper and more common, and more and more data is being made available for this kind of research.

More about Depression and Mental Health

DEPRESSION MAY SPEED UP BRAIN AGING – Psychologists at the University of Sussex have found a strong correlation between depression and the speed at which the brain ages.

POOR MENTAL HEALTH LINKED TO HOTTER DAYS – In the midst of a global warming crisis, a new study finds that hot days above 80 degrees are taking a toll on people’s psychological well-being.

REVISITING USE OF PSYCHEDELICS IN PSYCHIATRY – A resurgence of testing of psychedelics, which fell from grace in the mid-twentieth century, sheds new light on their therapeutic benefits.

Mary McMillan is a lecturer in biomedical science at the University of New England, Australia. Her research focuses on genetic and biological markers for depression, and she teaches genetics and human development. She is also a keen science communicator and advocate for women and girls in STEM. You can follow her on Twitter, Instagram, or LinkedIn.