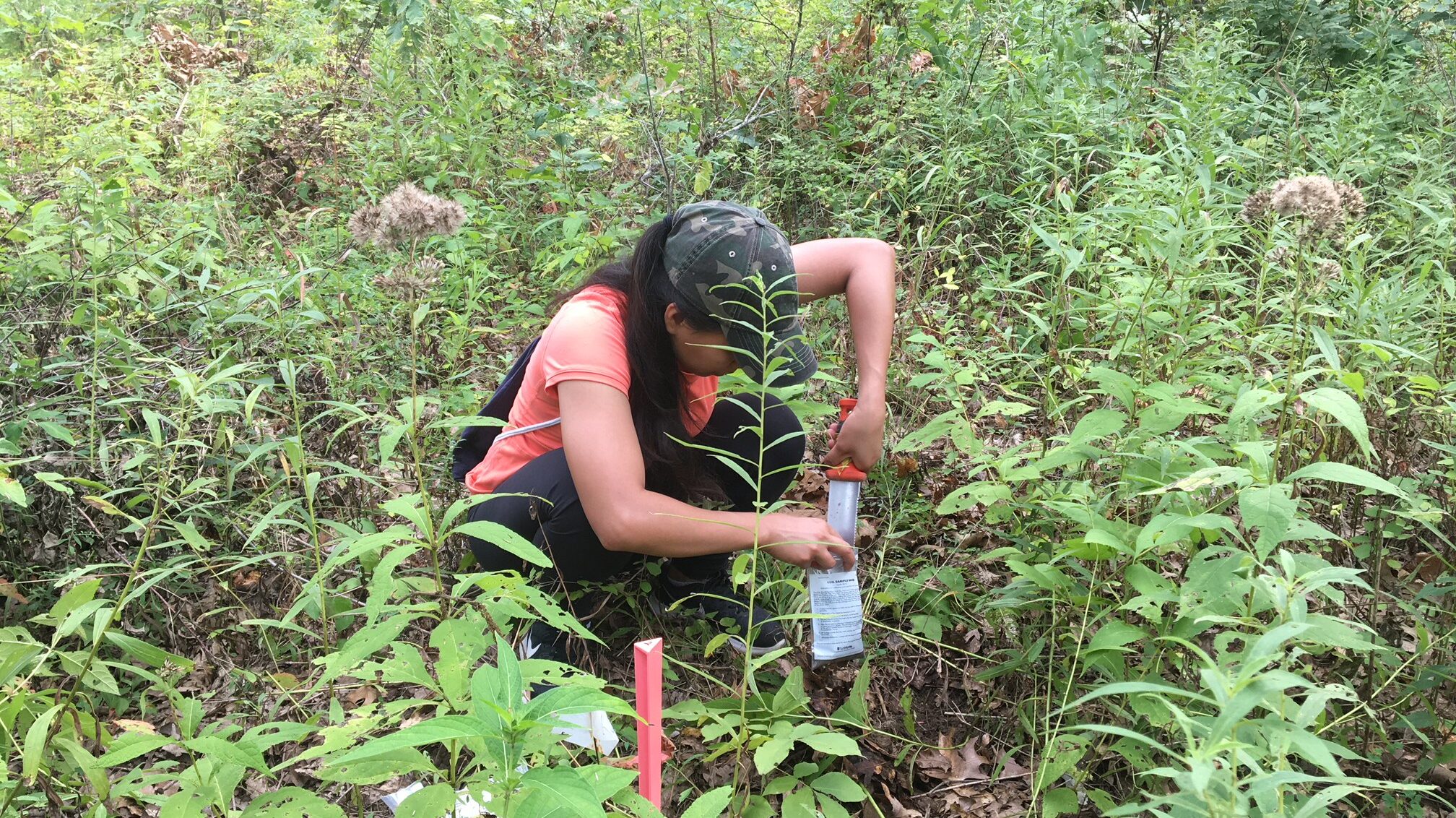 MO DIRT, Missourians Doing Impact Research Together, is a program that educates individuals on soil science and engages them as citizen scientists. These volunteers contribute baseline information that helps our understanding of the current health status of Missouri soils. Soil health is the ability of the soil to function as a vital ecosystem that sustains living organisms, their processes, and environmental quality. Human existence is determined in part by soil health because of its critical role in food security and climate security.

Citizen science offers a great opportunity to volunteers who want to learn new skills and contribute data for scientific purposes. Their contribution to science can be significant because of their ability to collect many data points in different study sites during similar time frames, using standardized procedures, over extended periods of time.

Why care about soil?

Soil is alive. Do you know that there are more microbes in a teaspoon of soil than there are humans on Earth? These microbes, along with other soil organisms, water, air, and soil particles, play important roles in maintaining a good quality of life for humans. We depend on the soil to produce most of our food, as well as fiber for clothes, medicines, building materials, and more. Soil contains the largest storage of carbon on the terrestrial portion of the planet and is therefore important in climate dynamics.

When soil organisms breathe, carbon dioxide is emitted into the atmosphere. If the soil is disturbed due to agricultural management, burns, construction, flooding, or other actions, greater amounts of carbon are released into the atmosphere. Consequently, greenhouse gases in the atmosphere increase, contributing to rising global temperatures and affecting weather and climate patterns. Thus it is critical to maintain healthy soils and reduce soil disturbance in order to meet food production demands and reduce the impacts of climate change—especially since soil is considered a nonrenewable resource, as it takes hundreds to thousands of years to build up.

When you go to the doctor, your health is assessed by measuring different health parameters, such as blood pressure or body temperature. A similar approach is used for determining the soil health of a site by measuring physical, chemical, and biological soil parameters (soil health surveys).

Since 2015, MO DIRT has been offering training to volunteers, who receive a soil kit and a manual to measure soil health indicators for at least 10 months (February through November). Participants select monitoring sites in natural habitats (forest, woodland, or prairie), anthropogenic habitats (cropland, pastureland, or grassland), or both. The data collected is archived through an online open-access data portal. It is available to the public for different purposes including land management decisions, design of classroom teaching lessons, and scientific research.

The interpretation of soil health measurements is based on grouping the indicators in three major categories: physical, chemical, and biological. These indicators, however, do not determine the health of the soil on their own—their interaction is what makes the soil a sustainable, viable ecosystem.

Soil aggregate stability measures the ability of soil aggregates to withstand outside forces such as wind and water erosion and maintain their structure. A soil aggregate consists of groups of soil particles that bind to each other more strongly than to adjacent particles, through secretions and “glues” produced by fungi, microbes, and plant exudates.

Soil aggregation was found to be very stable in most habitat types except croplands. Root biomass and abundance of microbes contribute to soil aggregate stability. Some croplands are subject to mechanical disturbance through compaction and tillage, a method of preparing agricultural soil by mechanical agitation such as digging, stirring, and overturning; this destroys aggregates and soil organisms.

Soil water content is critical for plant survival. This indicator is greatly influenced by temperature varying seasonally with higher levels during the colder months and lower levels during the warm months, as expected. Forest and woodlands hold more water than the other habitats since the canopy lessens water evaporation. On the other hand, croplands had the lowest levels of soil water content, but only early in the growing season. As the plants grow, the vegetation generated helps reduce water evaporation from the soil. It is important to take into consideration, that some croplands received water through irrigation, influencing the natural levels of soil water content.

Soil fertility is determined in part by the presence of nitrogen, phosphorus, and potassium, nutrients that plants need in large amounts (macronutrients). On average, low levels of these elements were found in all habitat types. This is expected for natural habitats but not for croplands that receive chemical inputs. If croplands are not covered by vegetation all year, soil nutrients can be lost through water and wind erosion, which can dramatically affect soil health. For soil nutrients to be accessible to plants, the soil has to be at the right pH (an indicator of how acidic or basic a substance is). The soils from the study sites had pH values ranging from 6 to 7.5; therefore, nutrients were available for vegetative growth.

Soil respiration, the gaseous flux of carbon dioxide from soils to the atmosphere, is of particular interest to MO DIRT and may significantly influence climate dynamics. This flux is generated by plant roots, soil microbes, and animals, and is indicative of the biological activity in the soil. Soil respiration rates increase as temperature rises and with availability of organic matter, peak under optimal soil moisture conditions, and decrease when soils are too hot, too wet, or too dry.

Soil respiration was found to change seasonally, with higher rates during the warmer months and lower rates during the colder months. Forests, prairies, and grasslands showed the highest rates of soil respiration. These habitats hold significant amounts of organic matter generated by soil organisms and by plant biomass above and below the soil. The vegetation buffers extreme weather conditions such as high precipitation and drought. Croplands, on the other hand, show the lowest soil respiration rates due to low levels of organic matter and soil organisms, resulting from soil manipulation and disturbance.

Checking in with citizen scientists

Citizen science experience. The most frequent motivators to join MO DIRT were education and enhancement of environmental stewardship. A majority of participants (80 percent) agreed that the time and effort invested in MO DIRT was what they expected. They also felt that they were making a valuable contribution to science and being part of the greater good, and recommended the MO DIRT citizen science experience to others.

Data collection and program commitment. In general, participants were satisfied with the program training, equipment, manuals, methodology, and data portals. This was reflected in the high level of commitment volunteers showed. Among 99 sites, 76 percent have been monitored for 10 months or more, with many participants completing two years of data collection and some starting their fourth year of sampling. They conducted thorough soil surveys, measuring multiple variables in both the field and the lab, over relatively long periods of time. Some participants monitored more than one site, while others drove for three hours to a study site every month, or even crossed state borders to be in the Missouri program. Some citizen scientists went further and became trainees, hosted training sessions, and helped in collecting and distributing soil kits.

Knowledge acquisition. Ninety percent of participants reported acquiring knowledge of soil science and soil health, gaining a better appreciation of soil health and the importance of soil in the carbon cycle, and becoming more aware of the need for scientific rigor and high-quality data.

Changes in attitude. Most of the participants wanted to continue learning about soil science and soil conservation. They reported thinking more seriously about how soil health is an important part of resilience and adaptation to climate change. Volunteers were more motivated to act as stewards of Missouri lands after participation.

The success of the MO DIRT program is reflected in the valuable collection of crowdsourced soil health data, the increases in public literacy on soil science, and the positive changes in attitudes toward citizen science and environmental issues among hundreds of citizens across Missouri. The high level of commitment demonstrated by these citizen scientists has been crucial to the success of the program. This human power is priceless and has resulted in major scientific contributions to our understanding of the status of soil health in the state.

Awareness of the importance of soil quality, good land management, and topsoil conservation are essential to state agriculture and Missouri’s economic stability. MO DIRT is making a difference through promoting soil science education. Hundreds of soil kits are now in use by educators, and our soil health trainings and crowdsourced data collection continue. What about organizing similar initiatives in your neighborhood or at your school or university? We will be happy to provide advice even if you are not in Missouri. You can contact us at modirt@danforthcenter.org.

—Dr. Sandra Arango-Caro is an Education Programs Facilitator at the Donald Danforth Plant Science Center. She studied Biology at Pontificia Universidad Javeriana. Her graduate studies were in the Ecology, Evolution, and Systematics program at the University of Missouri, St. Louis. Her research includes studies on bird ecology, ethnobotany, forest regeneration, and conservation biology. Sandra has taught at universities in the United States and overseas, and has implemented informal education programs in schools and youth organizations. She currently coordinates a soil health citizen science program (MO DIRT) across the state of Missouri and a new plant science education program using virtual and augmented reality.

—Dr. Terry Woodford-Thomas studied botany at Eastern Illinois University, plant physiology and plant pathology at Purdue University, and developmental biology at Virginia Tech. Her graduate work was at Harvard Medical School, where she was an American Cancer Society Research Fellow. She conducted additional research in molecular biology and physiology at Vanderbilt University School of Medicine and in biochemistry at Purdue University. Terry was a faculty member in the Department of Immunology and Pathology at Washington University School of Medicine from 1991 to 2001, after which she came full circle back to plant science as the Director of Science Education and Outreach at the Danforth Plant Science Center from 2001 to 2019. Her lab was a home for wayward plants and a place where precollegiate students got their first authentic experiences in laboratory research.