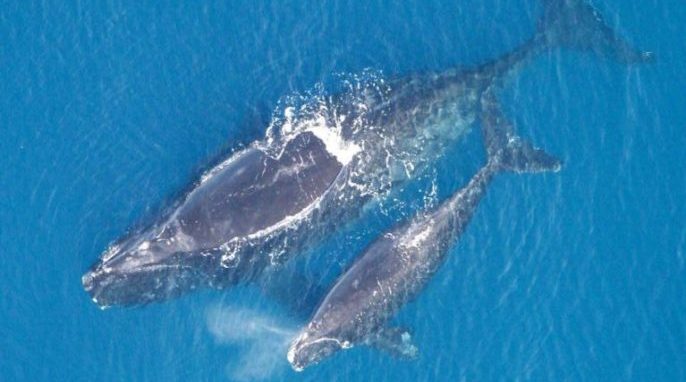 After decades of recovery from the brink of extinction, the North Atlantic right whale is once again under serious threat from human activity. But this time the decline is not due to overhunting the animals (once prized for being the “right” whales because of their slow speed and tendency to float on the surface when killed). After a long struggle to recover, injury or death from entanglement in fishing gear and a dramatic decrease in whale births have turned this once hopeful success story into a sobering cautionary tale.

The right whale population first began its slow but steady recovery after a whaling ban went into effect in 1935. The number of known individuals eventually climbed from 295 in 1992 to about 500 in 2015. But recent studies show that human behavior is still threatening the recovery of the endangered whales.

According to researchers from the New England Aquarium, the University of Rhode Island, Provincetown Center for Coastal Studies, University of North Carolina, Woods Hole Oceanographic Institution, and Duke University, deaths caused by fishing gear have jumped from 35 percent to 85 percent of all human-caused right whale deaths. The remaining whales that were studied had been killed by collisions with ships or by unknown natural causes. The researchers estimate that humans caused an average of 4.3 deaths per year between 2009 and 2013.

In a move aimed to help reduce whale deaths from ship collisions, the United States and Canada recently took action to make ships slow down and to move shipping lanes out of migratory paths. The National Oceanic and Atmospheric Administration (NOAA) also set aside critical habitat for the whales in 1994. In a 2016 statement announcing that it was expanding the protected habitat area, the NOAA said, “We’re making significant progress in reversing the population decline of the species, and are seeing signs of recovery.”

While laws protecting habitat have been successful, laws meant to decrease deaths from fishing gear have not worked. In fact, after nearly 20 years of enforcement, there is no evidence that current fishing regulations have been effective at reducing whale deaths. Sadly, 83 percent of North Atlantic right whales studied show scars or are still wrapped in rope from getting tangled in fishing gear. And even if the whales do not die from being entangled, their injuries can cause reproductive failure or ongoing health problems. “Right whales need immediate and significant management intervention to reduce mortalities and injuries from fishing gear,” the authors conclude in the study. If this does not happen quickly, the population will most certainly see a further decline and could once again face extinction.

In addition to deaths directly caused by human activity, the right whale population has decreased because of low birth rates. Since 2010, the number of calves born has dropped by a shocking 40 percent. Scientists still aren’t sure of the exact causes of this huge decrease. “We have a couple of strong suspicions, but nothing confirmed,” says Dr. Scott D. Kraus, vice president and senior adviser of the Anderson Cabot Center for Ocean Life at the New England Aquarium. Along with the reproductive and health damages caused by entanglement, lack of access to food due to climate change and the lingering effects of a widespread disease could be causing the low birth numbers. More research is needed to determine the reasons for the decline.

Researchers are not only working hard to get answers as to why North Atlantic right whales are dying, but they are also busy finding solutions to the known problems. Aquarium scientists Amy Knowlton and Tim Werner are inventing new types of fishing ropes that break more easily when whales become entangled in them. This promising new research is being done in partnership with rope makers and the fishing industry.

As for what the future holds, Dr. Krauss and his colleagues believe that acting quickly on this new information could mean the difference between the species coming back from the brink of extinction for the second time in history—or vanishing forever.

July 6, 2020July 10, 2020 Science Connectedanti-social, brain mapping, loneliness, neuroscience, social isolation, zebrafish
Are you a loner or a lonely fish? Social isolation in zebrafish led to anxiety when reintroduced to society, mirroring how...