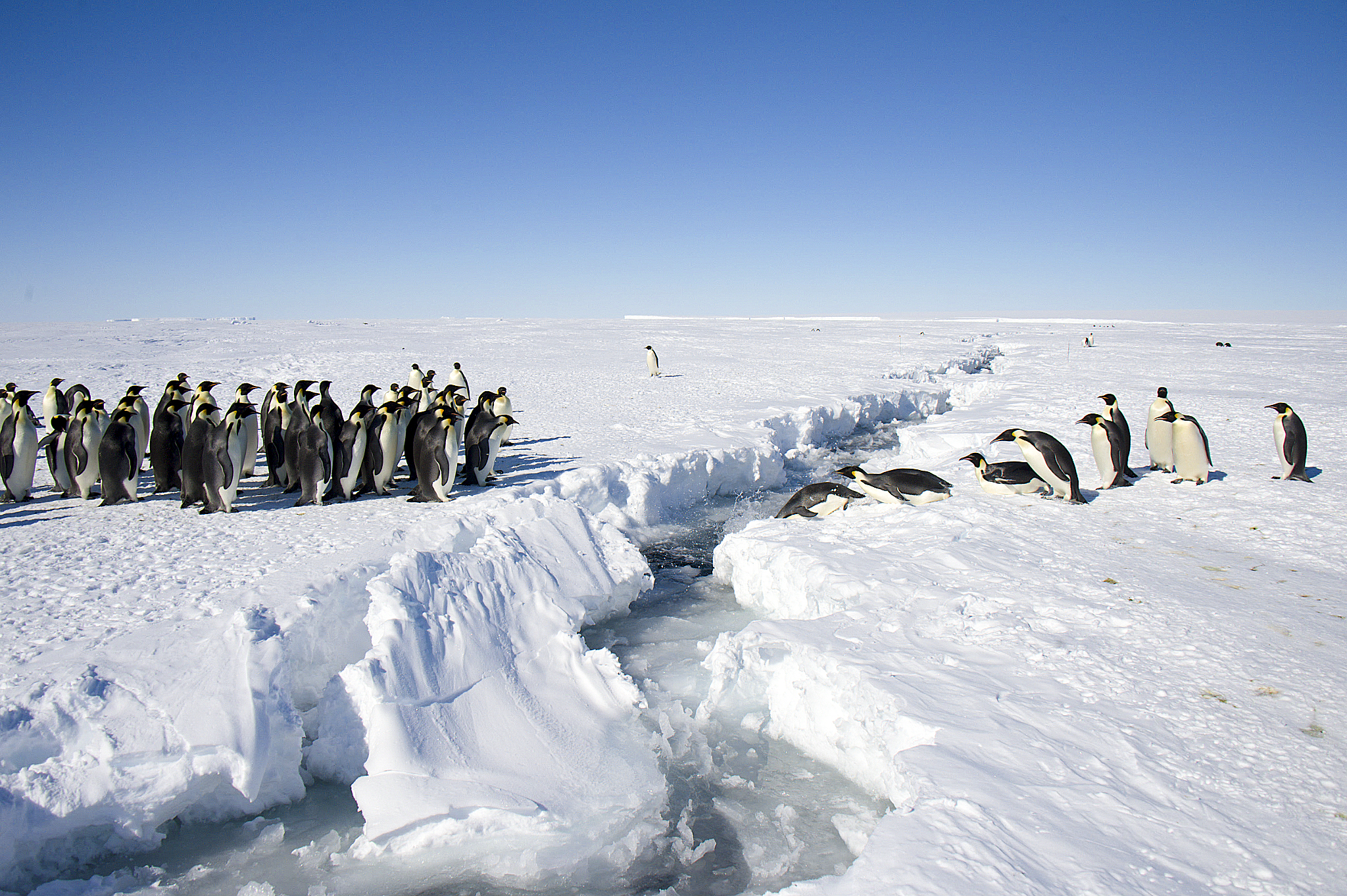 Emperor penguins officially a threatened species because of projections of population decline from climate change and ineffective conservation.

Currently, the main anthropogenic threat (meaning, a threat caused by the influence of humans) to emperors is climate change. High greenhouse gas emissions, especially in the energy, transport, and agricultural sectors, are expected to cause a two degree increase in global temperatures and a 30 to 40 percent loss in Antarctic sea ice area over the next century. That’s bad for the penguins, because fast ice is critically important to the emperor breeding cycle. Rising temperatures that cause delays in ice formation and early ice breakup can reduce the rates of successful breeding and offspring and colony survival, even to the point of local extinction. Further, if we do lose that much sea ice, it could disrupt the Antarctic food web, making emperors at risk of starvation and population decline. Indeed, a growing body of research suggests sea ice plays an important role in sustaining the abundance and quality of tiny plants and animals which emperor penguins can consume. Sea ice recession may also bring many new species to emperor breeding sites, resulting in more frequent predation and resource competition.

Marine pollution is another current threat of secondary importance. Oil pollution through shipping and maritime activities is especially harmful to these aquatic birds, whose plumage must always be maintained in good condition. The amount of this kind of pollution has worsened since the early 20th century, when petroleum oil began to replace coal as a fuel source. By swimming across contaminated sites, emperors lose insulation, gain body weight, and develop ulcers in their mouths and noses, at times leading to hypothermia, drowning, and intoxication. Plastic pollution, drifting into maritime ecosystems at increasing rates since the 1950s from beaches, rivers, and wastewater discharges, is also of some concern. Emperor penguins are not so much in danger of eating plastics directly, but rather by eating prey with an accumulation of plastic toxins in their tissues.

To estimate future population trends, various mathematical models have been developed. For instance, Jenouvrier’s group at FLEDGE Lab analysed a demographic model in which local sea ice conditions specific to each emperor penguin colony were projected through to the end of the 21st century. To model these conditions, they used a scenario that assumes fossil and non-fossil fuels would be used in balanced proportions and the global CO2 level would double. Though dynamics differed from colony to colony, they determined that population growth would be negative for all colonies, and accordingly for the global population, by 2100. As simulated CO2 levels rose, Jenouvrier’s team projected the median global growth rate to decline by -1.1 percent per year by 2050 and then to further shrink by -3.2 percent per year by 2100,  accelerating the rate of population decline over time. To put such a number into perspective, a median growth rate of -3.2 percent per year would mean a very serious global population decline of 78 percent over three generations and could result in the extinction of nearly 20 percent of all emperor colonies.

As emperor colonies are difficult to access and the Antarctic climate is hostile to humans, very few notable conservation efforts are currently being undertaken. One such effort is the Protocol on Environmental Protection to the Antarctic Treaty (hereafter, the Protocol), a document signed in 1991 to devote the natural reserves of Antarctica to international peace and science. This document works to reduce the effects of human activities in Antarctica. In particular, where a certain area has shown exceptional environmental, scientific, or aesthetic value, the Protocol protects it by designating it an Antarctic Specially Protected Area, or ASPA for short. It becomes an offence to enter the area without a permit and to conduct research with any substantial risk of disrupting the local natural ecosystem. At present, eight ASPAs give full protection to emperor penguins at their breeding sites, but offer only very limited protection whilst they are at sea, diminishing their effectiveness.

Indeed, ASPAs rarely extend beyond land to cover large areas of ocean, leaving emperors vulnerable during some of their life cycle. Administrative issues also make ASPAs less helpful. As different ASPAs are often managed by different parties, the protected area legislation is often interpreted and applied inconsistently, with little systematic coordination between groups. Some parties also neglect their obligations under the Protocol, failing to collect and to provide full information concerning visitations to their ASPAs.

Owing to emperor penguins’ high vulnerability to climate change, modelling projections of severe population decline, and the necessity of more intensive conservation protocols, the US Fish and Wildlife Service has declared the emperor penguin a threatened species. With this new listing, it is hoped that more intensive conservation efforts can be put into effect to protect the species from extinction.

This study was published in the journal Biological Conservation.

Image credit to Christopher Michel under CC by 2.0 license.

Julia Kim is an undergraduate student in Physics and Mathematics at the University of Toronto. She is especially keen to write, to teach, and to research all things STEM, especially in the subjects of Particle Physics, Applied Mathematics, and Data Science.