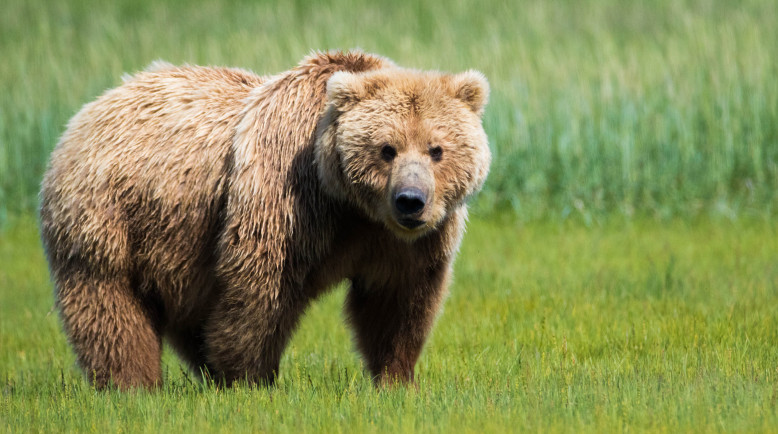 After spending a few days at Brooks Lodge, my father and I went back to Anchorage, Alaska, and took three flights to our next destination: the Natural Habitat Ursus. The Ursus is an old crab-fishing boat converted into a floating home-from-home, and our base for the next week. Every morning, we would eat breakfast, put on our waders, get into a skiff, and go to shore looking for bears.

The first day, the rest of our group arrived by seaplane and we were all sized up for waders. We all boarded a skiff, hopped out when we reached the shore, and began to wander through the tall muddy grass. Our guide told us that the first bear we were going to see was one of the most comfortable around humans. Her name was Melissa, and she had a cub who our guide named Fritz (all the guides have different names for the bears). We spotted the pair, and sat down about 40 feet away from them.

It felt strange to be that close to something that could instantly kill you with one good swipe of its paw. Yet, Melissa and her cub went about their business of grazing.

When people think of bears eating, most of the time they think of them eating salmon or some berries. Before this trip, I had never even thought about grazing grizzly bears. And they were not eating only a mouthful of grass every five minutes…they never stopped eating. They ate as if they were buffalo back on the plains. It was so strange to me.

As we sat there, Melissa got more and more comfortable with our presence, and the cub started to wander over to us. We were sitting on a riverbank with our backs to the river, and the cub got very close to us (maybe 15 feet). Then he went to get a drink, at which point Melissa couldn’t see her cub anymore. Like all worried mothers, she wanted to investigate, and came jogging straight towards us.

No matter how many times you are assured that you are safe, it is a little nerve wracking to see a massive bear heading for you. Once she got about 10 feet away (and closing), our guide crawled out in front of us, just in case. As soon as she realized that we didn’t have her cub, she turned and went down to the river behind us (and we all let out the breath that we had been holding). After both bears got their share of water, they climbed back up the riverbank and continued grazing.

We watched the pair for about three hours, and then some other bears approached, including a male trying to court a female. Melissa spotted the two and decided it was best for her and her cub to leave. As the courting pair got closer, our guide identified the male as Van, one of the biggest bears in the area. Van followed this female around through the grass for about a half hour, then just lay down on the grass. Our guide told us that he wasn’t tired, but was in a submissive pose, trying to show the female that he wasn’t trying to hurt her, and that he was trying to get her attention. The female moved away from the area, Van sat up (looking more like a lion than bear) and followed her.

Once they were a safe distance away, we packed up our things, returned to the skiff, and eventually back to The Ursus to catch some shut–eye before the next day of adventure. We all went to sleep around 11:00pm, with the sun just starting to hide behind the mountains. Turns out we would need the rest, because nothing would prepare us for what would happen the next day. To be continued…

Max Goldberg grew up in the northern Chicago suburbs. He will attend Iowa State University this fall as a freshman, planning to major in Aerospace Engineering. In addition to flying radio-controlled planes and engineering his own RC creations, Max is a photographer. He was the lead photographer for his school paper and worked on the yearbook. His photos have won him four Best in Show awards at the Lake County Fair. You can enjoy more of his photography on Flikr.